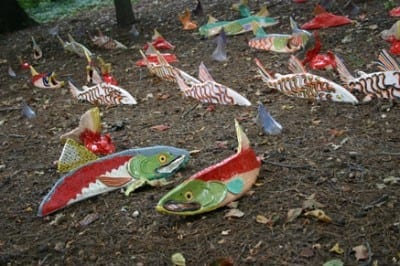 Atlanta’s drought is over. But as “Still Water,” an ambitious exhibition at Agnes Scott College’s Dalton Gallery reminds us, the water crisis is not.

Curated by gallery director Lisa Alembik, the show addresses serious issues in an engaging spectrum of mediums. This could have been a harangue. Thankfully, the artists know how to express their thoughts with a minimum of finger wagging and even some moments of wit.

Simmering beneath the specific theme is the larger question of how artists see their role in the culture. Not surprisingly, the participants offer lots of different answers.

Some artists act as advocates. Photographer Jeff Rich’s medium has a long history as a vehicle for muckraking, a term that applies almost literally to his investigation of the French Broad River Basin — a once-polluted waterway that was cleaned up in the ’70s and is again at risk.

His larger point is the interrelationship of man and water. Because Rich, a SCAD professor, contrasts scenes depicting the beauty of the river and its recreational possibilities with images of despoliation and neglect, the project is most effective when seen as a body of work, as in the narrated video in the gallery. Although the individual photos stand on their own as artworks, it seems to me that they lose something essential out of that context.

Indeed, finding the right balance between advocacy and aesthetics is no mean trick. Too much in one direction, and the work becomes a tract. Too much in the other, and the content gets lost. Linda Gass’s impeccable art quilts and William Nixon’s Salmon Run” — a picturesque installation of a colorful ceramic fish “swimming” uphill near the Bradley Observatory — teeter a bit. Without the accompanying texts to make their point, visual pleasure might obscure content.

Some artists choose to make action, rather than objects, their medium. Aviva Rahmani, represented here by an informational consciousness-raising web site, follows in the footsteps of Helen and Newton Harrison, ecological artists of the 1970s. Like them, she collaborates with scientists and land planners to come up with ways to solve specific real-life problems.

>Mandy Greer held community crocheting sessions to fashion the macrame-like pieces that festoon trees around the campus, titled “Mater Matrix Mother and Medium.” Though it’s a pleasure to meander through the immaculate grounds, the webs of blue yarn aren’t particularly effective. Similar pieces fare better as part of a performance recorded on video and showing in the gallery.

Of course, art doesn’t have to doesn’t have to “do” something to be meaningful. Cases in point: “Tidal Channel,” Katherine Kolb’s reverent landscape photograph (above) and Katherine Taylor’s haunting paintings.

Taylor’s work often reflects the impact of man-made and natural disasters. In “Marine,” she updates the classic genre of marine painting in an oceanscape dominated by hulking gray warship.

They double as musical instruments, which visitors are invited to play: Zarrilli conceived it as the equivalent of a Native American rain ceremony. He claims that Atlanta’s drought began to ease while he was making the piece and its completion day coincided with the September flood. Who says art isn’t powerful?