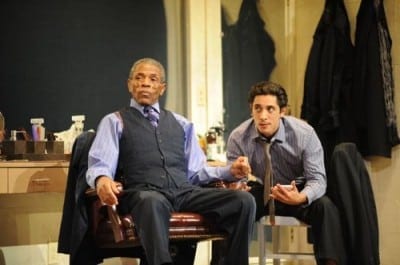 The Alliance Theatre’s production of “A Life in the Theatre” is, alas, D.O.A.

I first saw David Mamet’s play when it made its Off-Broadway debut in 1977 at the Theatre de Lys (now the Lucille Lortel). At the time, no one knew what to expect from this upstart Chicago playwright who’d followed the sting of “Sexual Perversity in Chicago” with the let-it-bleed emotional violence of “American Buffalo.” (Which has since become something of a Mamet trademark).

The show was about all things theatre, 26 or so short comic scenes of two lives in the theatre: One older, John, one younger, Robert. They were played, respectively by Ellis Rabb, the flamboyant and imaginative founder of the A.P.A., which was, in its time, a kind of national theatre, approximating the sort of touring ensembles in England. Rabb also acted everything from Lady Bracknell to Hamlet. His co-star, Peter Evans, was a handsome actor who never quite achieved the marquee celebrity of, say, Al Pacino, though he created roles for Mamet, David Rabe and Arthur Miller. He died young, at 38, of AIDS.

The show is supposed to be a delightful backstage peek at the sort of repertory theatre community that was fading even back in the 1970s … the sort memorialized in the Peter O’Toole movie, “Venus” (for which he was Oscar-nominated).

Robert and John share more than a dressing room and some hilarious on-stage bits — spoofy excerpts from a certain kind of old warhorse plays that seemed to be continually playing somewhere sometime. They share lives, dreams, even, corny as it sounds, an enduring love of the stage.

The version I saw all those years ago was poignant, hopeful, bittersweet— all those spangled notions of a life in the limelight so many of us still hold dear (as the Old Actor in “The Fantastiks” says, “There are no small actors. Only small roles.”)

Oh, and it was very funny.

Apparently someone forgot to tell the Alliance that last part. “A Life in the Theatre” has been directed with a heavy hand and a distracted eye by Robert O’Hara. It is ineptly acted by Andre De Shields, who may have an impressive list of credits but never, even for a moment, inhabits the role of Robert. He’s not acting a ham actor with an endearing side; he’s just being a ham actor.

Ariel Shafir comes off slightly better, if only because John, as written, takes up less space emotionally or theatrically. Still, he could’ve been co-billed with De Shields in the program. (In photo: De Shields, left, and Shafir.)

Their scenes together, as we watch the balance of power shift over the years, have about as much snap, crackle and pop and a box of Rice Krispies, circa 1963. De Shields comes off as disinterested or uncertain. Shafir starts out well, then withdraws as their connection unravels over the course of the show’s hour and a half (with NO intermission; you’ve been warned).

The matinee I caught was, admittedly, not very full, which can be disheartening to any actor. And those who were there didn’t seem to get the theatre-centric jokes. But at least they were trying. The pair up on stage weren’t.