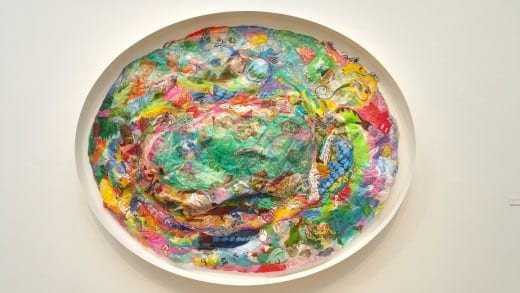 The next plastic bag you use, if not recycled, will most likely wind up in a landfill, ocean, park or beach where it will remain for thousands of years along with the other 500 billion to 1 trillion plastic bags that are consumed worldwide annually.

If you live in Atlanta, there’s at least a chance it could wind up in Amandine Drouet’s studio.

The French-born artist contributes to a genre of environmentally conscious art that transforms trash, recyclables and other disposable items into catalysts for more meaningful ecological awareness.

Winner of the 2015 Forward Arts Foundation Emerging Artist Award, Drouet presents a colorful reimagining of plastic as the currency of consumerism in her solo exhibition Plastique, on view at Swan Coach House through May 27.

For such artists, the medium couldn’t be the message more strongly. Drouet melds byproducts of global consumerist culture — plastic bags, product labels and packaging — into plastic painterly microcosms wherein the stuff of manufacturing, marketing and media culture exist in a new framework. Drouet fuses these various plastic elements with both heat and hand-embroidery techniques creating fluid, tactile surfaces that ebb and flow like ocean tides. In La Terre ne Tourne pas Rond (The Earth is not Turning Around), an oblong oceanic ecosystem hangs on the wall in a petri dish-like frame. Its aerial perspective creates god’s-eye scrutiny. Lodged between rippling waves are visual signifiers of consumerism: remnants of advertising, pop culture and other ubiquitous images like a Mickey Mouse hand, a bucolic landscape, a pampered calico cat, a Georgia peach.

Chateau Plastique operates in similar fashion. Between its green and blue seaweed layers, made mostly of melted plastic grocery bags, are magical Disney-like castles, roving ships and cardinals perched on invisible twigs. Some of them are caught in hot pink embroidered nets that resemble coral or spider webs.

The work recreates the sensation of swimming in a maelstrom of 21st century visual culture fed by kitsch and corporate capitalism, yet it’s surreally light-hearted and whimsical.

Overall, the show is finely crafted and visually cohesive. Its worlds within worlds make it mesmerizing, harnessing your attention as you try and figure out what exactly you’re seeing. Yet, some works aestheticize their materials rather than implicate them in our human-ecological problem.

Five smaller portrait-like works hang in the gallery’s northeast corner, each distinct in its personality. Some resemble exotic textiles, others abstract expressionist paint spills. Some have clever titles like Au Revoir les Elephants (after the French film Au Revoir Les Enfants). It’s unclear if the abstracted imagery, albeit visually lush, has a conceptual function beyond the fact that each work is made of plastic.

Can ecologically driven art be successful simply if it is well-made, beautiful and recycled material that would otherwise wind up in the digestive tracts of wildlife animals or in underground landfills emitting toxic fumes? Or does the gravity of ecological realities require a greater punch?

Drouet’s series of three photographic light boxes, rPET-1, rPET-2 and rPET-3, operate with more deliberate political intention. rPET, or recycled polyethylene terephtalate, is a highly sustainable and reusable material used in some plastic bottles. Drouet has altered three such bottles, making them into perfectly symmetrical snowflake-like formations. Lit from the back as they devolve into lovely patterns, they conjure their own breakdown for future use. Here, the beauty of these objects is actually woven into the conceptual direction of the work.

At its best, Drouet’s art serves as a reminder that what is thrown away doesn’t simply cease to exist.