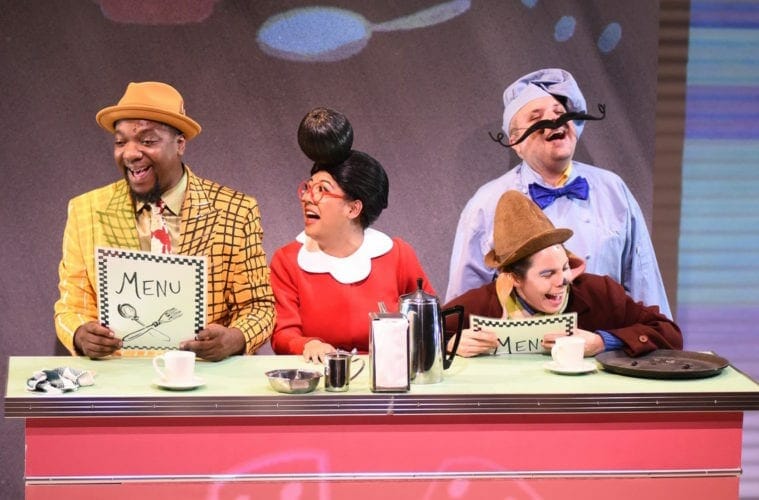 The diner scene in Max Makes a Million, with Neal A. Ghant (from left), Shelli Delgado, Ann Marie Gideon as Max and Tony Manna (All photos by Greg Mooney)

Max Makes a Million, new at the Alliance Theatre, looks like a million bucks. Its design elements – costumes, wigs, set, lights, sound, projections – inspire wonder. And the cast comprises some of Atlanta’s better actors, including Shelli Delgado, Neal A. Ghant, Ann Marie Gideon and Diany Rodriguez. Why, then, does the 45-minute run time seem so much longer? 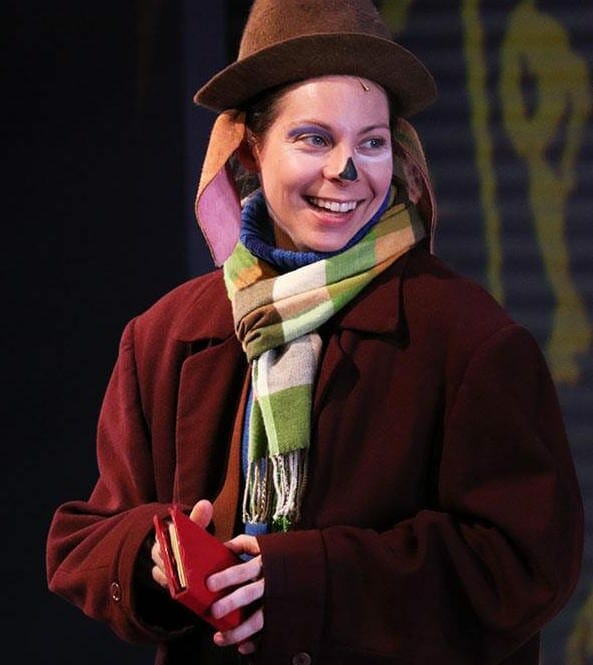 Ann Marie Gideon as Max. Note the floppy puppy-dog ears and the poetry notebook in hand.

The adaptation, based on Maira Kalman’s 1990 children’s picture book, comes from Liz Diamond of Yale Repertory Theatre, who also directs. It’s an animal of a different stripe than last summer’s Winnie-the-Pooh, in which the characters portrayed human frailties and triumphs – the kindhearted, if dim, Pooh Bear; Eeyore, the sad-sack donkey; the overenthusiastic Piglet; the calm, maternal Kanga.

Diamond’s characters are mere outlines who skate on the surface of the story. They decorate it, but they don’t move it forward, which is unfortunate because the work here is demanding. Nearly every actor plays three to six roles (Gideon as Max is the sole exception). There are funny bits, to be sure — Delgado’s New Yawk-accented diner waitress, Ghant’s pompadoured tango dancer and many of Tony Manna’s personalities, which keep him hopping with split-second costume changes. A live, three-piece jazz combo — pianist Eric Baumgartner, drummer Q. Robinson and saxophonist Jordan Shalhoup (with original music and orchestrations by Justin Ellington) — wail winningly, upping the hip quotient. But the center doesn’t hold, and there’s little plot to move forward. 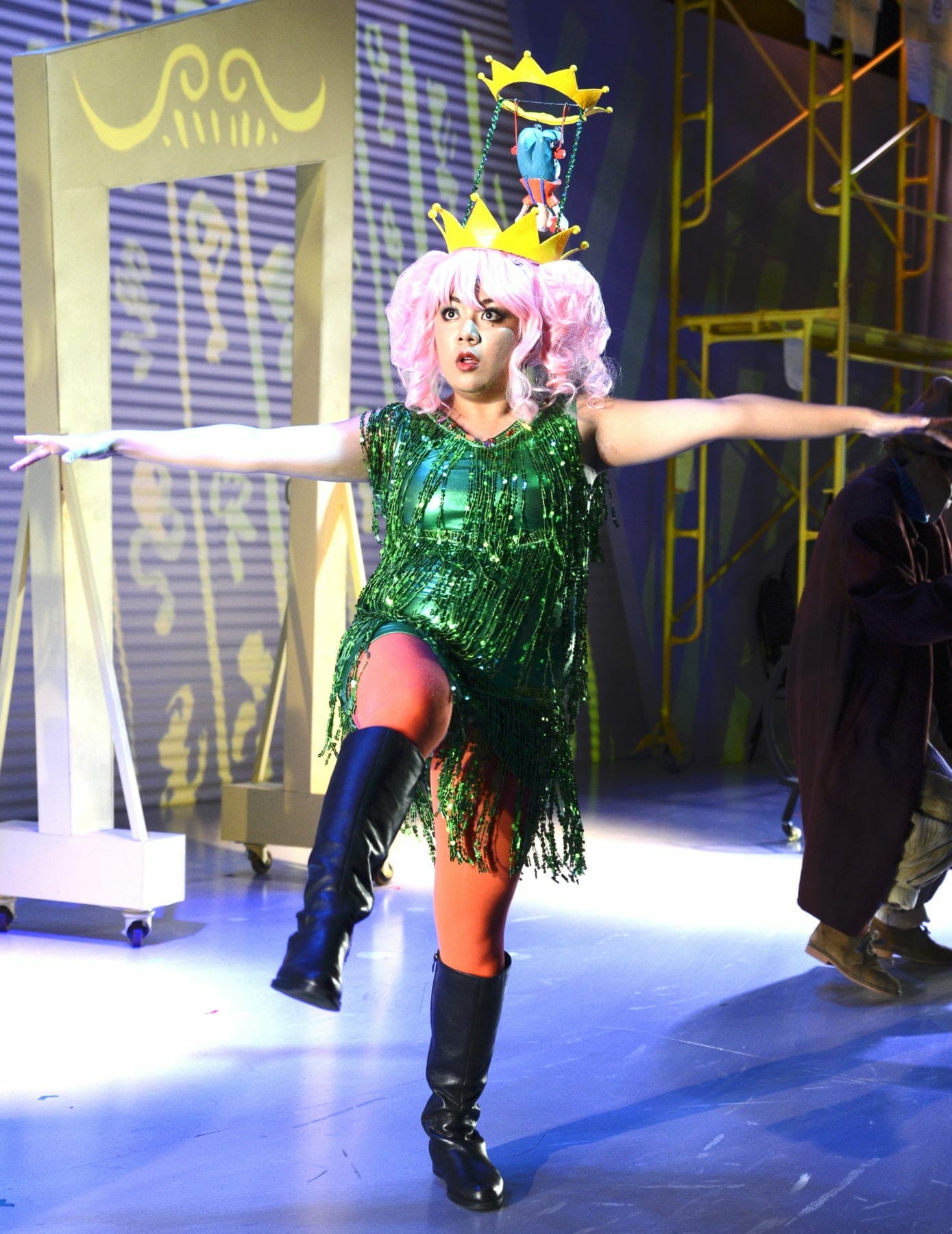 The show begins and ends with Max, a likable enough canine who fashions himself a Beat poet. He lives in New York with the decidedly upper-class Morris (Manna) and Ida (Rodriguez) and has friends all around town, but he yearns for Paris. One of the best scenes happens early on, when Max negotiates the thrumming city streets on his way to his office. Like the “Runyonland” opening in the musical Guys and Dolls, it’s a wry comment on the mania, self-importance and faster-better-more ethos of the Big Apple.

Max, perhaps wise beyond his dog years, enjoys sharing a life lesson now and then. His go-tos: “Dreams are very important” and “Parents must give their children two things — roots and wings.”

Perceptive messages for family audiences, perhaps, but somehow not quite enough. The best family shows hold truths for everyone — The Miraculous Journey of Edward Tulane comes to mind, as do A Year With Frog and Toad, The Miracle Worker, A Woman Called Truth and the Alliance’s A Christmas Carol.

Gideon, a performer of great talent (the Alliance’s Edward Foote, Geller Girls and Temple Bombing, among many others) just doesn’t click as Max. She emphasizes the character’s cool and hard edges as opposed to his warm heart and ooh-la-lah. It’s hard to know whether that’s due to the script, the direction, the performance or a combination. 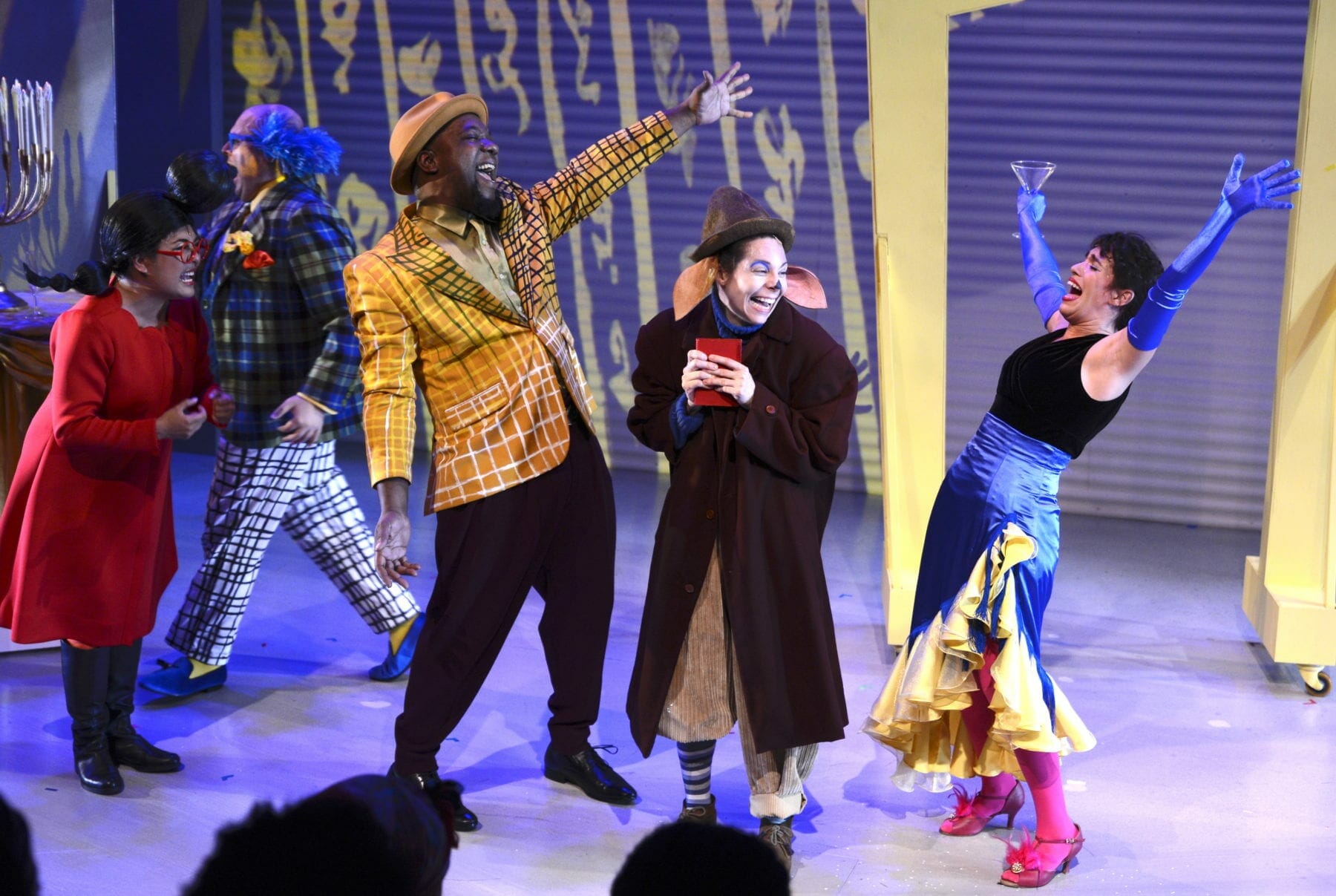 The Alliance’s Max Makes a Million is part of a collaboration with the High Museum of Art, where the exhibition The Pursuit of Everything: Maira Kalman’s Books for Children continues through September 15. This is the fifth consecutive collaboration on children’s book authors for the two Woodruff Arts Center entities. A complementary exhibit, Maira Kalman: My Favorite Things, runs through July 21 at Fay Gold Gallery in the Castleberry Hill district downtown. Max Makes a Million also runs through July 21.

So while away an afternoon with Max, if you wish. Designers Fabian Fidel Aguilar (costumes), Louisa Thompson (sets), Liz Lee (lights), Clay Benning (sound) and Mike Tutaj (projections) provide a feast for the eyes and ears, but you won’t leave feeling like you’ve had a full meal.

At the end of the day, alas, Max Makes a Million is barking up the wrong tree.