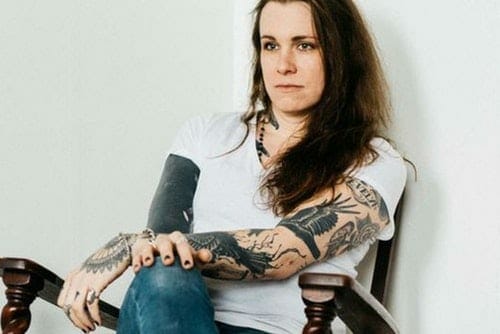 Georgia-born Laura Jane Grace, frontwoman for the punk band Against Me!

Punk rock legend Jayne County has stories about hanging out with Andy Warhol and David Bowie and drinking in gay bars in New York City’s Greenwich Village in the late 1960s, and she’s super proud of having participated in the Stonewall riots. She left Atlanta shortly after being shot at by what she calls a truck full of rednecks while she and friends were hanging out near the Catacombs music club at Peachtree and 14th streets.

That was an all-too-common experience for members of the LGBTQ community 50 years ago, when people could be shot at for dressing in drag or being openly homosexual. Nowadays, Pride Month is celebrated freely, and Atlanta has queer leaders. But there is still room for more progress in a music community that is largely white and male-centric.

That’s where Taylor Alxndr, musician and executive director of Southern Fried Queer Pride Atlanta, comes in. She says the arts festival started in 2015 out of dissatisfaction with local pride festivals, as well as a frustration with spaces for queer and trans folks and the lack of uplifting people of color. This year’s festival starts tonight at The Bakery and runs through June 30. “We bill ourselves around bringing the queer community together using the arts,” Alxndr says. “The art has also really kind of pushed the movement and pushed things toward liberation.”

Despite the room for movement forward, it was the movement outside the Stonewall Inn that started it all. County, known as the first openly transgender punk rocker, was 21 when she and her friends in New York City finally got fed up. “People snapped,” she says of the famous riots. “We’d had enough, and it was time to fight back.”

She describes the commotion in the streets, people marching and shouting, “Gay power!”

The Mafia owned the Stonewall Inn and blackmailed its patrons while overcharging for alcohol. They got away with it because the State Liquor Authority wouldn’t license bars that catered to homosexuals and often suspended liquor licenses for “indecent behavior.” Police raided Stonewall regularly.

The brick-throwing, trashcan-burning tirade of queers on June 28, 1969, was the beginning of the civil rights movement for the LGBTQ community. County, now 71 and living again in the Atlanta area, says she can hardly believe she was there.

“I look at it like it’s kind of a movie of some kind or a play or something,” she says. “It’s just so hard to realize that I was actually there that many years ago; I actually was in the Stonewall riots.”

The effects of the riots echoed far and wide — within six months, two gay activist organizations were formed in New York, and, a few years later, gay rights organizations were founded across the U.S. and the world. The Stonewall riots paved the way for what is now Pride Month. The soundtrack to the movement is heard across genres from punk rock to synth-pop because as much as music inspires, it also creates community.

Although County left Atlanta for New York in 1967, she returned throughout the 1990s while one of the first queer bands of note — Benjamin Smoke’s Opal Foxx Quartet — pushed boundaries. Benjamin (Robert Dickerson) was openly gay and known for dressing in drag.

“Atlanta has certainly progressed a lot from the time that I used to live down there and used to get chased down the street and shot at, you know,” County says.

Now, County is recording with Amber Taylor, another Atlantan who is well-known in the queer music scene from her work leading The Sexual Side Effects.

Laura Jane Grace, the Georgia-born frontwoman of the punk band Against Me! and now on tour as Laura Jane Grace and the Devouring Mothers, came out as transgender in 2012 and continues to be one of the biggest influences to this generation’s local queer artists.

One of those artists is Alyx Frasier, who founded the band Kvrtsy about three years ago. She was a huge fan of Against Me! before Grace came out as a transwoman.

Frasier says she grew up in a strictly religious home and repressed homosexual urges to the point of self-destruction and denial. She didn’t realize she was a transwoman when her friends made jokes about Grace.

“I was confused; I remember thinking, ‘I love this person. I love their music. Why should I let the fact that they have a new gender identity get in the way of that?’” Frasier says. “I was still a huge fan. Laura Jane Grace taught me respect.”

Frasier came out as transgender eight months ago and wants to play shows in Atlanta. She grew up in Grayson, about 40 minutes outside the city, and hopes to be added as an opening act when friends’ bands play places like Smith’s Olde Bar.

“Atlanta is my home,” Frasier says. “I can walk around, wear a dress or skirt and act however I want. I can walk down a rainbow crosswalk into a coffee shop with a ‘Resist Trump’ banner and I feel at home, I feel confident.”

Frasier worries her band’s upcoming gig in Monroe won’t be as welcoming to a trans performer.

Atlanta, however, is much friendlier to bands. County says she never had an issue finding queer-friendly places to play in in Atlanta and lists the events hosted by Wussy Mag and hanging at the Clermont Lounge among her favorites to this day.

“I love trashy drag nights and the 80-year-old strippers,” she says. “It was a hoot, the Clermont Lounge.”

Though many other musicians proudly celebrate Pride Month, Wussy Mag writer and ARTS ATL contributor Sunni Johnson doesn’t see a full queer music scene and believes the music community has much work to do “regarding performative allyship, especially in intersections of trans and [people of color] queer performers.”

She says queer musicians seem to lean toward DIY, self-created communities. “Wanting your own space and community is understandable in a cis-het-male-dominated industry,” she says. “The reign of white, opinionated, egotistical men in the music scene still dominates regardless of the queer integration in venues and on show bills.”

Alxndr agrees, saying she sometimes wonders whether she is booked as the only queer act or the diverse act on the lineup. “Even though it is queer music because it does have specific ties to my queer identity, I feel this music — regardless of identity — is accessible and relatable to a lot of people,” Alxndr says.

But she thinks the scene is way more diverse than people perceive it to be, and as she books acts and networks with queer musicians, she realizes it’s everywhere.

“I book and I work with queer musicians who are rappers, SoundCloud producers and rock stars and indie artists,” Alxndr says. “They’re everywhere. I’ve met a few queer country musicians.”

While the queer music community has been in Atlanta as long as the Clermont Lounge, sometimes people have to look deeper to see its influence.

“I think as queer people, we’ve always known,” Alxndr says. “It’s just always been more community based. And sometimes you have to do some digging to find it in non-queer settings and more mainstream settings.”

(Editor’s note: Alxndr goes by both “she” and “they” pronouns.)