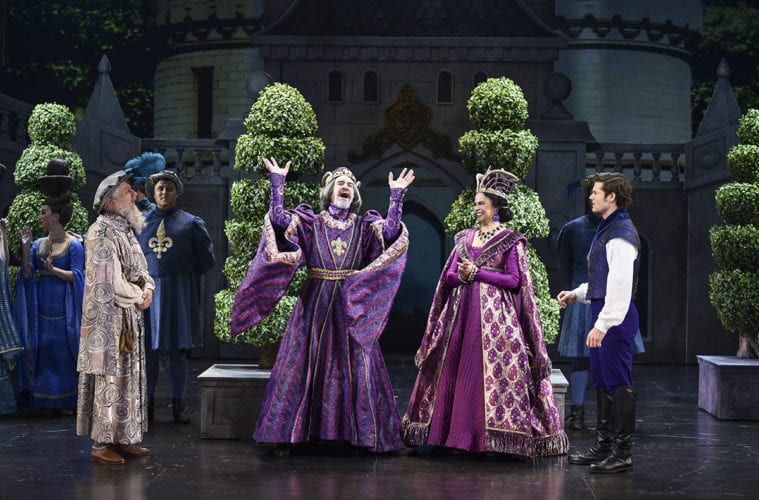 The Alliance Theatre has announced its 51st season, which will mark the first full season back in the Woodruff Arts Center since renovating the new Coca-Cola Stage.

The season will include the world-premiere musical Becoming Nancy, based on the bestselling book by Terry Ronald and directed by Tony Award-winner Jerry Mitchell (Kinky Boots, Hairspray). Set in 1979 London, the popular boy in high school is cast as the female lead in the school play, and heads will roll. Another musical premiere will hit the Coca-Cola Stage, but this time set in the not-so-distant future. In Maybe Happy Ending, two robots find themselves obsolete and isolated after their owners no longer have use for them. This musical by Will Aronson and Hue Park examines our relationship with technology.

Two-time Pulitzer Prize winner Lynn Nottage’s play Sweat will close the season. Under the direction of Suzi Award-winning director and actor Tinashe Kajese-Bolden, the play looks into the lives of unemployed factory workers in Reading, Pennsylvania, and explores the class divide on the other side of the 2008 recession.

The season will also see the return of Charles Dickens’ A Christmas Carol and Courtenay’s Cabaret, starring Courtenay Collins, who has been away performing in The Prom on Broadway.

Artistic director Susan V. Booth said in an email that the season is a celebration of humanity. “Our human experiences are complex. I love that our Coca-Cola Series opens with a joyous world premiere musical about finding your true voice, while our Hertz Stage opener asks us to consider our relations with silence– both ideas that we humans can encounter at the same time. We take a fierce pride in curating wild diversity– how else can we speak to all the richness Atlanta holds?”

Becoming Nancy
September 5–October 6, 2019
Music by George Stiles
Lyrics by Anthony Drewe
Book by Elliot Davis
Based on the novel Becoming Nancy by Terry Ronald
Directed by Jerry Mitchell
It’s 1979 in the south London suburb of East Dulwich, and David Starr has just been given the female lead in the school play. The unconventional casting sends shockwaves through David’s small town, and he must muster the courage it takes to find his own spotlight. This world-premiere musical boasts an international creative team, with direction and choreography by two-time Tony Award-winner Jerry Mitchell (Kinky Boots, Hairspray), a book by Elliot Davis (Peter Pan, Loserville) and a score by the songwriting team of George Stiles and Anthony Drewe (Mary Poppins, Peter Pan, Honk!).

Small Mouth Sounds
October 4–27, 2019
By Bess Wohl
Directed by Susan V. Booth
This Off-Broadway hit comedy finds six strangers in the overwhelming quiet of the woods, at a silent wellness retreat, for what they hope will be a life-changing experience. As they confront internal demons both profound and absurd, their vows of silence collide with the achingly human need to connect. Filled with awkward and insightful humor, Small Mouth Sounds is a unique and compassionate new play that asks how we address life’s biggest questions when words fail us. Maybe Happy Ending
January 18–February 16, 2020
Book by Will Aronson and Hue Park
Music by Will Aronson
Lyrics by Hue Park
Directed by Michael Arden
Set in the not-too-distant future in Seoul, South Korea, two obsolete helper-bots are living an isolated existence in a robots-only housing complex on the edge of the city. When the two discover each other across the hall, they have a surprising connection that challenges what they believe is possible for themselves. Looking past our era of technology-driven detachment, this award-winning musical imagines a magical and bittersweet reawakening to the things that make us human.

Seize the King
February 14–March 8, 2020
By Will Power
Directed by Charlotte Brathwaite
With his country’s throne empty, Richard knocks down threats to his ascension, fueling his insatiable ambition and paranoia. Even if he can be stopped, who can ensure a tyrant won’t rise in his place? Award-winning playwright and Spelman College professor Will Power delivers a propulsive and timely modern reinterpretation of Shakespeare’s Richard III.

53% OF
March 28–April 19, 2020
Written by Steph Del Rosso
Directed by Nataki Garrett
Set in Bethlehem, Pennsylvania, and Brooklyn, New York, three collections of like-minded people try to find their place in the current political landscape. Separated by age, class, culture and values, each group believes its side has the answers to fixing a deeply divided nation. Inspired by the finding that 53 percent of white women voted for Donald Trump, this Kendeda Award-winner is a humorous and strikingly honest examination of Americans on both sides of the political debate.

Sweat
April 22–May 17, 2020
By Lynn Nottage
Directed by Tinashe Kajese-Bolden
In one of the poorest cities in America — Reading, Pennsylvania — a group of down-and-out factory workers struggle to keep their present lives in balance. Based on Nottage’s extensive research and interviews with residents of Reading, Sweat is a topical reflection of the present and poignant outcome of America’s economic decline. A Christmas Carol
November 13–December 24, 2019
By Charles Dickens
Adapted by David H. Bell
Directed by Rosemary Newcott
Back for the 30th year at the Alliance, celebrate the holidays with the beloved Dickens classic in this Broadway-scale production with beautiful live music and an all-star Atlanta cast.

Courtenay’s Cabaret: Home for the Holidays
December 5–24, 2019
By and starring Courtenay Collins
Atlanta favorite Courtenay Collins returns to the Alliance after her Broadway performance in The Prom with her popular holiday cabaret. Accompanied by a live band and a rotating list of surprise guests, Courtenay sings holiday classics and new favorites with the wit and quirky Southern charm that have won her fans from Atlanta to New York City.

Max Makes a Million
June 20–July 21, 2019
Based on the book by Maira Kalman
Adapted and directed by Liz Diamond
Poetry, dance, jazz, visual art and, most of all, dreams coalesce in a glorious theatrical adaptation of Maira Kalman’s one-of-a-kind book Max Makes a Million. This play follows the beat-poet dog Max Stravinsky on his quest to get to Paris and celebrates those wishful thinkers who dare to dream beyond what seems possible. Max Makes a Million is produced in collaboration with the High Museum of Art’s exhibition The Pursuit of Everything: Maira Kalman’s Books for Children.

Ghost
October 26–November 2, 2019
By Idris Goodwin
Adapted from the novel by Jason Reynolds
Directed by Tinashe Kajese-Bolden
In the Alliance’s fall production for middle and high school audiences, Castle Crenshaw, a.k.a. Ghost, has been running his entire life, but for all the wrong reasons. Then one day he meets Coach, an Olympic medalist who sees his unique talent and offers him a life-changing invitation to join the middle school track club. Can Ghost harness his raw gift for speed, or will his past finally catch up to him? Based on the popular YA novel of the same name, Ghost teaches the importance of finding your team.

Naked Mole Rat Gets Dressed: The Rock Experience
March 7–29, 2020
Book and lyrics by Mo Willems
Music by Deborah Wicks La Puma
Based on the book Naked Mole Rat Gets Dressed by Mo Willems
Directed by Leora Morris
Children’s book author and artist Mo Willems (Knuffle Bunny, Elephant and Piggie’s We Are In a Play) brings another lovable character to life. Grab your friends and watch as Wilbur, a clothes-loving mole rat with exceptional style, navigates the pressure to be just like everyone else. With tail-shaking tunes and empowering messages of individuality, this musical is sure to rock audiences of all ages.