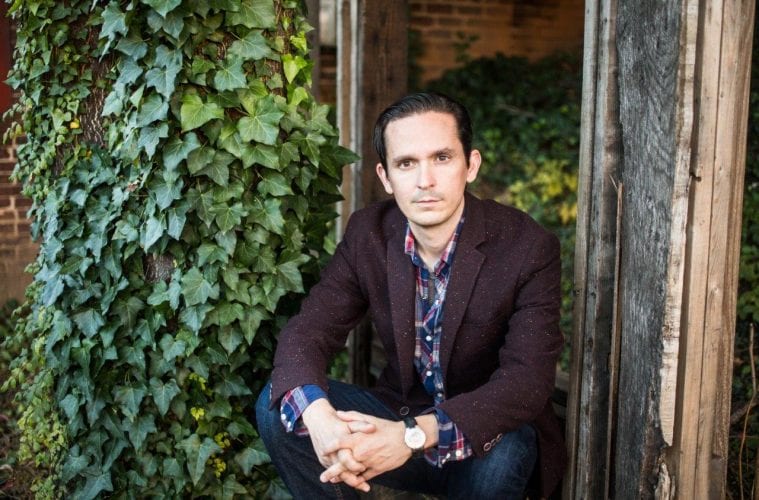 A Conversation with Thomas Mullen, author of “Darktown”

Thomas Mullen had been living in Atlanta for about two years when a friend suggested that he read Gary Pomerantz’s Where Peachtree Meets Sweet Auburn: A Saga of Race and Family (Penguin Books, 688 pp.) as a way to learn more about the history of  “the City Too Busy to Hate.”

The result of this fascination is Darktown (Atria / 37 Ink, 384 pp.), a crime drama that follows “Negro Policemen” Lucius Boggs and his partner Tommy Smith as they try to solve the murder of a young black woman last seen in the company of a drunk white man. Boggs and Smith’s quest for truth and justice are thwarted by Officer Lionel Dunlow, an unabashed white supremacist, and his partner, Denny Rakestraw, a forerunner of the New South who recognizes injustice when he sees it, but lacks the moral courage required to affect significant change.

When Mullen sat down to write Darktown four years ago, cities like Ferguson, West Baltimore and North Charleston were not yet inextricably linked with racism, police brutality and the Black Lives Matter movement. But by the time Mullen’s agent started shopping his novel in 2014, a feeding frenzy erupted among publishers in New York and producers in Hollywood, all of whom recognized the story’s ripped-from-the-headlines appeal.

Mullen will be speaking at this year’s Decatur Book Festival on Labor Day weekend, September 2-4, and will appear at Margaret Mitchell House for an author’s talk and book signing on Tuesday, September 13, at 7 p.m.

ArtsATL: We are all familiar with the sins of the Jim Crow South, but what did you find  particularly egregious while researching your book?

Thomas Mullen: I was blown away by all the restrictions placed on the city’s first black cops. [The vanguard of eight policemen] could only patrol black neighborhoods. They could not drive squad cars. They could not arrest white people. They were barred from using police headquarters and had to operate from the basement of a YMCA. White officers placed bounties on the heads of black officers. And judges would disparage them from the bench.

I didn’t come up with anything new in terms of the ill-treatment of these men. Hopefully, no one will read this book and think that I pushed the envelope, because I really didn’t.

ArtsATL: Was there really a place called Darktown, or did you make it up?

Mullen: There was a very poor, overcrowded, crime-ridden neighborhood in Atlanta called Darktown that stretched from Peachtree Street and Collins Street (now Courtland Street), past Butler Avenue (now Jesse Hill Jr. Drive) to Jackson Street. At the other end of the spectrum was Sweet Auburn, a thriving African-American community that was indecipherable from other middle- and upper-class neighborhoods across town. But white people have not always been so great at discerning class distinctions among blacks and routinely conflated one community with the other. For them, Darktown could encompass all of black Atlanta.

I chose Darktown as a title because it signifies all that Boggs and Smith have to overcome, as well as the blindness of a lot of the white characters. ArtsATL: By the same token, none of your characters are all-good or all-evil.

Mullen: Homogenous black people and homogenous white people don’t make for an interesting or dynamic story line. When writing fiction, I am always looking for tensions and fault lines. That is gold to me.

A lot of people don’t realize that, even in the Jim Crow South, cities like Atlanta were home to scholars, clergymen, professionals, entrepreneurs and millionaires. Under the circumstances, black cops had to deal with racism on the job and negotiate class resentments and distrust within their own community.

The diversity of Sweet Auburn fascinated me. I wanted to dramatize the tension between privileged, native Atlantans and former sharecroppers living side by side. If you were a member of the Talented Tenth, you were not necessarily happy about all these new families moving in, crowding the neighborhood, hanging their laundry out in the backyard and having livestock in the front yard.

Mullen: We’ve all seen movies [Mississippi Burning] or read books [A Time to Kill] that purport to be about race or civil rights, but the hero is a white person.

I think you’ve got to be really careful to not tell these stories and have them just be about a moral awakening of white people. I was very conscious and wanted to avoid that with Rake while also playing with the reader’s expectations. I know we’ve been trained to think that he’s going to save the day, but it’s not going to happen.

ArtsATL: You had a series of corporate jobs [producing, writing and editing newsletters] before becoming a novelist. How did that experience influence your writing practice today?

Mullen: I’ve always written pretty quickly, but having to write on a two-week deadline made getting bogged down a luxury I could not afford.

I had to come up with story ideas, write my own copy, lay it out using early desktop publishing software and edit ruthlessly [for the sake of space]. The best thing about that experience is that it taught me not to fall in love too hard with any particular phrase or paragraph because I might have to change it.

ArtsATL: I hear Darktown has legs!

Mullen: I just sent the second book of the Darktown series to my agent last month.

I want to trace the civil rights movement through crime stories that involve these characters because so much is going to happen in the next 15 to 20 years. Amy Pascal at Sony Television has purchased the television rights and Jaime Foxx will executive produce. I’m very excited. I think it would be a great show and it’d be good for the city — especially if it was filmed in Atlanta.