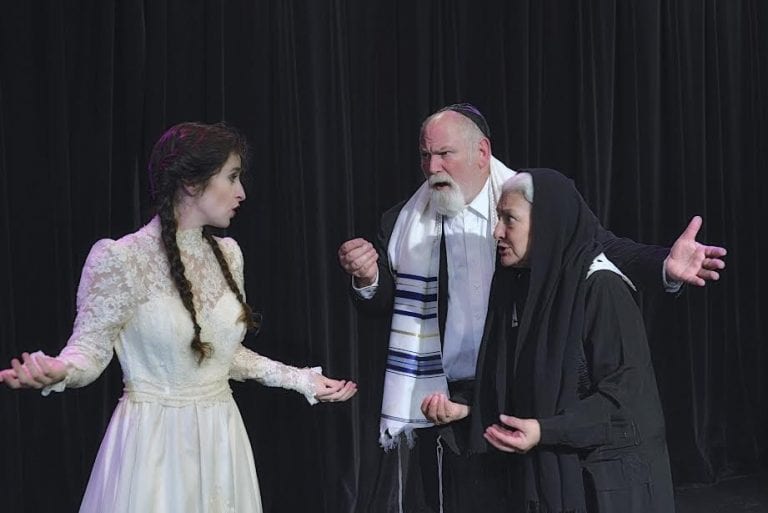 Review: Essential’s “Dispossessed” is overwhelmed by its storytelling ambitions

Whatever can be said about Karen Wurl’s new work Dispossessed, the playwright cannot be accused of a lazy effort. Her work has enough material for a number of plays.

Running through August 28 at the West End Performing Arts Center, courtesy of Essential Theatre, Dispossessed opens the company’s 2016 season. It runs in repertory with Derek Dixon’s When Things are Lost. Both are world premieres and co-winners of the 2016 Essential Theatre Playwriting Award.

In this comedy-drama, it’s 1928 in the Lower East Side of New York City as a Yiddish theater company is in rehearsals for a new play. It’s a family company, with married couple Chaim (Scott Rousseau) and Chavelle (Kathleen McManus) in the show with Chaim directing. Their daughter Rivka (Amelia Fischer) is starring in the piece and her cousin Tsilah (Christie Vozniak) is the prompter.

Lucky Rivka is being pursued by two men involved with the play — Natan (Jake Krakovsky), the handsome actor playing her love interest, and the sweet, less aggressive Izzy (Chris Schulz).

The company’s play is called The Dybbuk and it involves a bride possessed by her deceased former love. As rehearsals proceed and her life grows complex, Rivka begins to see Leah (Alyssa Caputo), the character she is bringing to life. At first there is humor in the situation — with Rivka marveling at how well Leah’s costume is stitched up — but then she realizes that she can learn some things from the character. With everyone trying to tell her what to do, and after their own agendas, Rivka could also use some girlfriend time.

Essential Theatre’s annual works have become welcome additions to the local theater scene since 1999. Two years ago, the company staged a criminally undervalued drama, Ravens & Seagulls, with a lead performance by actress Suzanne Roush that matched any female performance of the year. Yet this production isn’t near that form or the company’s best.

Wurl’s new work simply has too much going on. It’s a play about putting on a play; it’s a family drama; it’s a character study about a young woman’s growth. Added to that is a dynamic with Rivka and her supposedly more attractive cousin who the family wants onstage. All are compelling, but Dispossessed jumps from one to the other — and the appearance of Leah never feels potent.

Many of the supporting characters aren’t given much dimension. Izzy, for example, could have used more defining characteristics. His pursuit of Rivka is almost an afterthought here with Natan’s pursuit — and a planned marriage — much more animated.

Dispossessed can be humorous at times, especially poking fun at actors and theater superiority, and director Peter Hardy moves it along quickly and smoothly. Even on a small, minimally decorated set, the play has a sense of place.

Hardy’s cast clearly enjoys the material. Rousseau and McManus are fine as the parents, while Fischer is charismatic as Rivka. Her character is a young woman trying to find herself and assert her independence. I particularly liked her rapport with wise, knowing Chavelle.

Wurl has worked with Essential Theatre before — her Miss Macbeth won the Essential Playwriting Award in 2005 — and a funny, warm play is somewhere inside this. It’s not without its charms, but Dispossessed is in possession of a little too much story — and ambition.