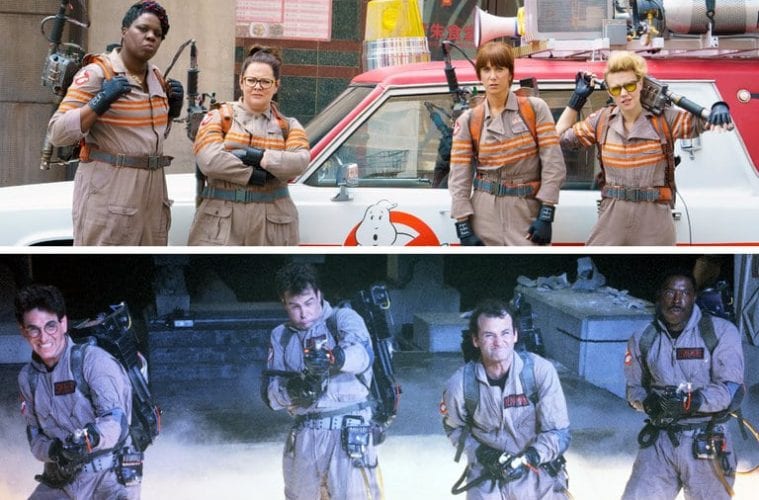 In preparation for the new Ghostbusters, I revisited the original one that I loved.

The film is aging poorly.

I wish I could say that it was as hilarious as I remember. Nowadays the sleazebag vibe Bill Murray smothers Sigourney Weaver with would be reasonable grounds for a restraining order. I didn’t recall that Annie Potts had no inner life or plot-driving function except to drool unrequited over Harold Ramis. Ernie Hudson was such token diversity casting that he had very few lines and even fewer laughs.

This is what passed muster as good, clean humor in 1984.

Ghostbusters deserved to get that hilarity into a more modern skin. In 2016, even the most straightforward comedy bro-downs are self-reflexive. Paul Feig’s feminist vision is clear, its clarity gloriously outstrips its former iteration, in large part because — unlike the original — this is a true ensemble cast. Everybody gets an egalitarian number of punch lines and has a proper backstory. The women of 2016’s Ghostbusters — Kristen Wiig, Leslie Jones, Melissa McCarthy, and Kate McKinnon — are competently assembled. Kate McKinnon as Jillian Holtzmann in the 2016 remake of Ghostbusters

The critical consensus is that Kate McKinnon stole every scene, and I agree. In her largest film role to date, this true character actor has room to expand the genderqueer comedic bent that she has been developing three minutes at a time on Saturday Night Live since 2012. Sometimes, in the film, she doesn’t even need a line — instead using her whole face to make the background of the scene twice as interesting. McKinnon’s steampunk wardrobe is visually arresting and draws attention to her use of movement. She delivers highly technical informative monologues with a tone that lets the audience know she’s proud of her work, that her inventions are sexy. Indeed, KcKinnon aggressively succeeds at being both super creepy and strangely alluring, kind of like Fairuza Balk in The Island of Dr. Moreau. (Not to mention, her inventions do enable the team to defeat any ghost in their path.)

Speaking of weapons, there are much more of them here than in the original. (How many times can we watch Dan Aykroyd use a giant penis — I mean, laser — to pull a ghost into a trap?) The 2016 reboot adds grenades, a shredder, guns and more. They do trap one ghost, but otherwise obliterate their enemies into explosions of slime. Strategizing on the fly as a team, the four women call out questions to each other as they battle. When they succeed, they stop to praise good work and recognize individual talents.

The adversaries are not merely phantoms. At every turn, they are denigrated not for their work, but simply for their gender.

Yeah, the women are PG-13 funny, but this Ghostbusters’ true value is the extent to which the women are scary. The mayor wants to shut them down because they’re too successful; the city makes them out to be nut jobs; the internet trolls say they’re a hoax. During one delightfully self-aware scene, they post a ghost-sighting video online and then skim the comments, arriving at this articulate gem: “ain’t no bitches gonna hunt no ghosts.” Men everywhere are dismissing these four smart, strong women with such regularity that neither the team nor the audience can really laugh about it. Does it stop them? No, and the ladies retain their empathy, even for the evildoer who is calling up the ghosts — a schlubby nerdling with delusions of grandeur not unlike the internet trolls who made this reboot’s trailer the most disliked movie trailer in YouTube history. The ladies don’t even bother to think of him as an enemy; they just shut him down and bless his heart.