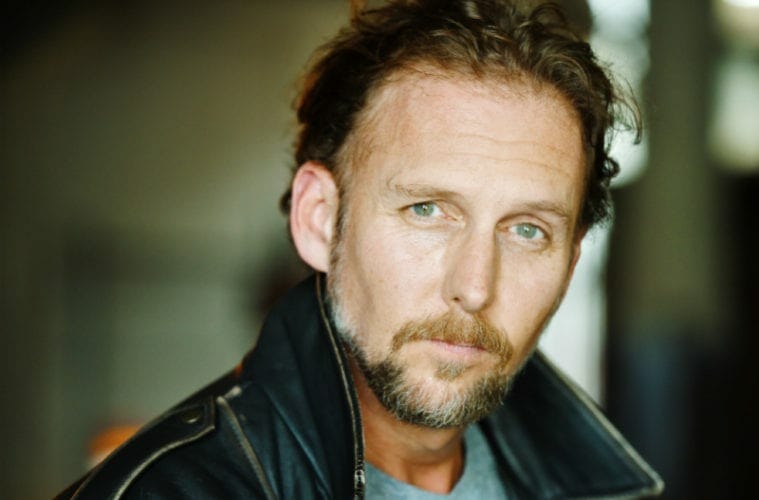 “If I could do nothing but theater for the rest of my life and make the kind of money I make in television, I’d do only theater,” says Atlanta stage/film actor Jayson Warner Smith. His credits include "Our Town" and "The Laramie Project" at Theatrical Outfit, AMC's "The Walking Dead" and Sundance TV's "Rectify," among many others.

20 by 2020: “Every once in awhile, they let me act,” says versatile Jayson Warner Smith

Our 20 by 2020 series will profile 20 theater artists, administrators and innovators by the end of the year. All are shaking up the city’s stages. This is no. 15. To see the others, search “20 by 2020” from the homepage.

These days, Atlanta-based stage and film actor Jayson Warner Smith — seen recently in Theatrical Outfit’s Our Town / Laramie Project repertory — jokingly considers himself bicoastal. He spends half the week in Athens, where his wife owns a home, and half in a Kirkwood condo. Wife Lisa Strzelecki prefers the Classic City. Kirkwood keeps Smith close to his work at Pinch ‘N’ Ouch Theatre, where he teaches acting fundamentals with a “serious emphasis” on the Strasberg method (in which actors strive for realism by using their emotional memories).

You may recognize Smith as despicable death-row inmate Wendall Jelks from the Sundance TV series Rectify (2013–14) or as bad guy Gavin on AMC’s The Walking Dead (2016–18). That two-season stint ended when he was stabbed in the neck with a stick from behind by an 11-year-old boy. “It was a wonderful death,” Smith says. “Half the episode was devoted to my last day on Earth.” 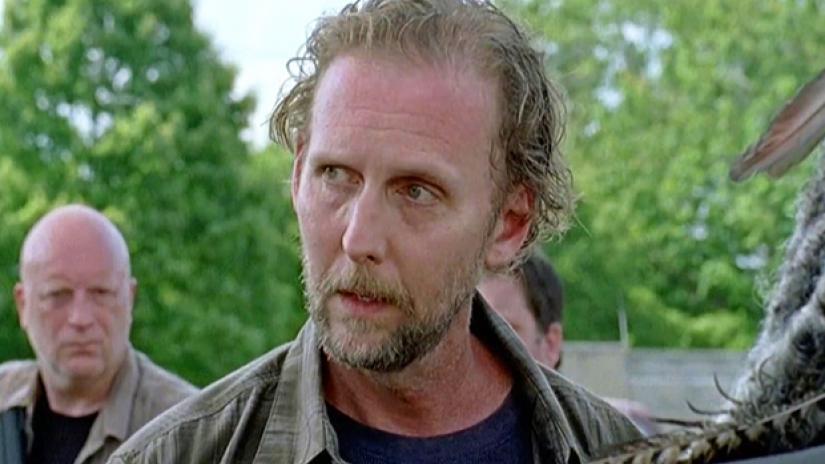 “It was a wonderful death,” Jayson Warner Smith says of bad guy Gavin, the character he played for two seasons on the TV series “The Walking Dead.” (Courtesy of AMC)

Smith’s first big on-camera job came in the 2011 remake of the feature film Footloose. He played Officer Herb, the local cop who, incidentally, was named for Herbert Ross, director of the original Footloose with Kevin Bacon (1984).

Before his memorable turns in Our Town / Laramie Project, Smith produced and acted in David Harrower’s two-character drama Blackbird — which depicts a confrontation between a rape victim and her much older assailant later in life — at the Robert Mello Studio.

“If I could do nothing but theater for the rest of my life and make the kind of money I make in television, I’d do only theater,” says Smith, 55. “I love the side benefits and perks of being on television and making films. They treat you like royalty. But the actual acting part of being on camera doesn’t even come close to the acting in theater.”

Still, he says, film projects allowed him to “let go of all other jobs except acting. And that makes me very, very happy.”

Then he adds, somewhat conflicted, “Theater doesn’t pay my bills. I don’t know when I’ll be able to do another play. I LOVE theater.” 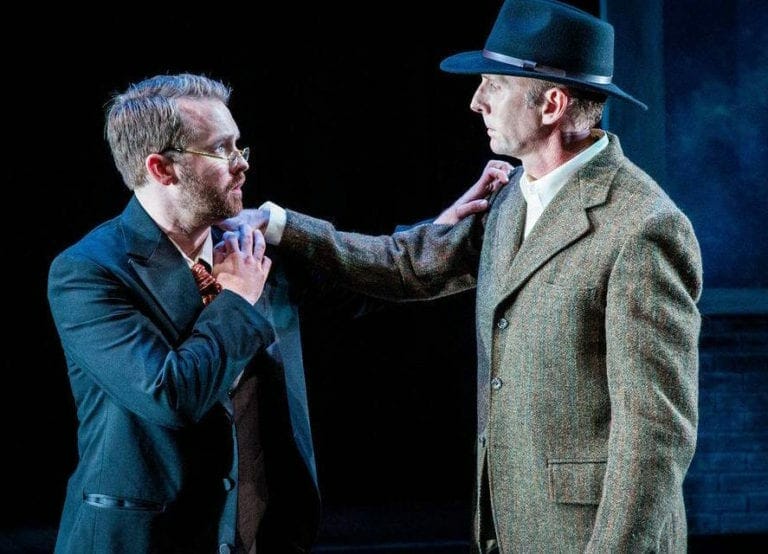 In Thornton Wilder’s great American play Our Town, Smith played Editor Webb (“I was one of the lucky few who got to play one part”). He had eight roles in The Laramie Project, a piece of documentary theater that revisits the town where gay college student Matthew Shepard died in 1998. He was, he says, “mostly the middle-aged white men.” 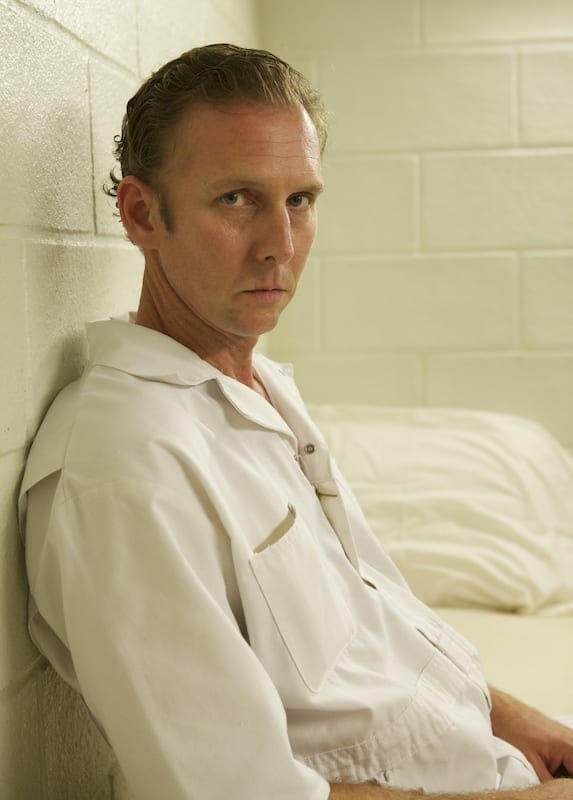 “It was a little scary at first,” Smith says of the epic project. “I’ve never done a rep in my life. I’ve never done a play like The Laramie Project, where I had to play so many characters in a two-hour span and come up with new characteristics for each and sounds and gaits and traits for these people, who were real people.” To get there, the acting company rehearsed eight hours a day, six days a week.

Lest you think this is old news, know that the Outfit rep was a profound moment in Atlanta theater and may very well be recorded as the highlight of the 2019–20 season.

In the short term, you can see Smith in two independent feature films that are playing the festival circuit and winding their way to release. In the thriller Reckoning (2019), he plays Wade Runion, part of the ruling family in a stretch of Appalachia responsible for collecting debts — no matter what he has to do. In the apocalyptic Only (2019), in which all the women are dying, he is, essentially, a bad guy who hunts ovaries.

Smith also shot three short films this year — Saltwater Taffy and Age Difference, in which he has lead roles, and Red Necks, in which he has a small role. He’s also been seen over the years onstage at Actor’s Express, Aurora Theatre, Pinch ‘N’ Ouch, the Shakespeare Tavern Playhouse and Synchronicity Theatre.

The boy born at the corner of Highland Avenue and Boulevard, when Atlanta Medical Center was called Georgia Baptist Hospital, grew up as a theater kid in Smyrna, doing shows with the South Cobb Arts Alliance, Cobb Children’s Theatre and Cobb Teen Theatre. His middle name — Warner — comes from those years, added when one of the actors’ unions told him he couldn’t use simply “Jayson Warner” because there were too many others. The name honors Joy Warner, a neighbor and an artistic director at the Cobb theaters. He considers her a second mom. 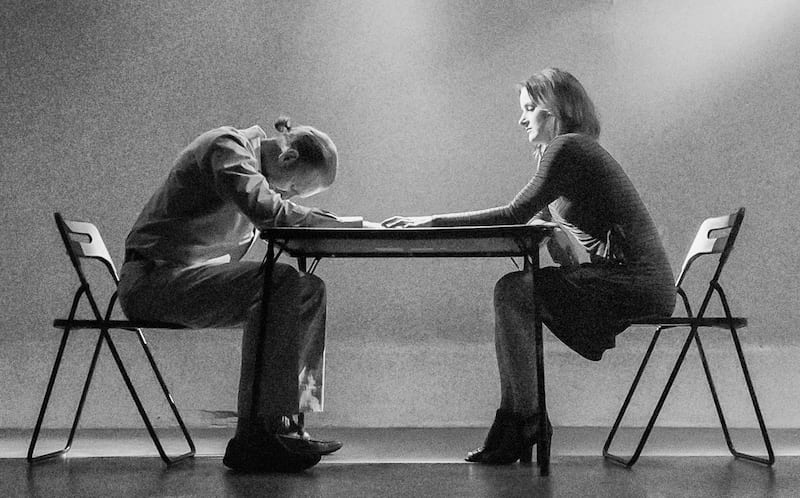 For fun, Smith takes out his 2001 Triumph Bonneville motorcycle. For his 50th birthday, in fact, he rode it solo on a five-week cross-country trip — from Atlanta to Yellowstone to Taos, New Mexico, to Los Angeles and back to Atlanta. “Definitely a life-changing moment,” he says. He turned the odyssey into the 40-minute travel documentary Learning to Fly.

In his downtime, he hangs out with wife Lisa; they cook and eat and watch HBO together. And he goes to the gym, teaches and auditions.

“Every once in awhile,” Smith says, “they let me act.”