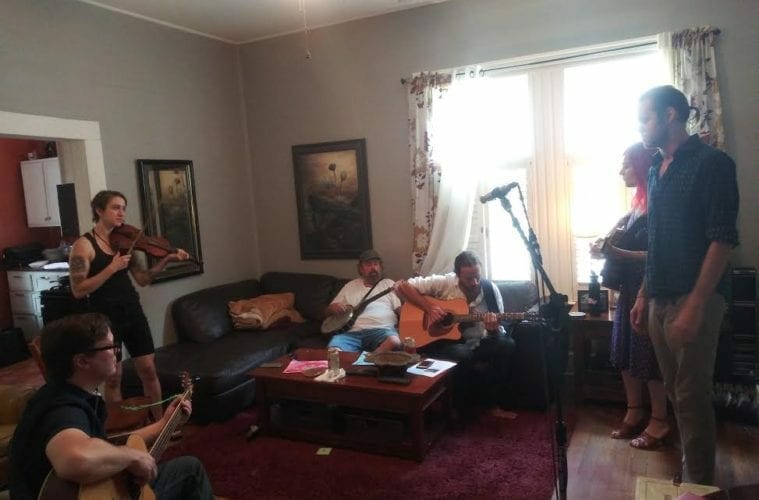 The Carroll Street Troubadours lay down “Be Kind to a Man When He’s Down” in Fiddlin’ John Carson’s old home. (Photo courtesy James Kelly)

The musical history incubated in Atlanta’s Cabbagetown neighborhood is the stuff of legend. Over the past century, the colorful and kindly community has made a name for itself churning out fearless musicians and creative innovators in their own right. It’s where country-music pioneer Fiddlin’ John Carson got his start, where Joyce Brookshire built her folk-hero status and where, in the late 1980s and early ’90s, a musical renaissance came to fruition with Cat Power, The Rock*A*Teens, Smoke and The Jody Grind.

Despite its legacy, the scope of Cabbagetown’s impact on Georgia’s musical history has never been documented in one project.

After a year in the works, Cabbagetown Chronicles, the first recorded compilation of Cabbagetown’s musical scene from the 1920s to today, will be released November 2 on CD. Funded by a grant from the Georgia Music Foundation, the project will feature rare and unheard tracks from Cat Power, Fiddlin’ John Carson, Smoke and The Rock*A*Teens, as well as contributions from Joyce Brookshire, W8ing4UFOs, Kelly Hogan (The Jody Grind), Anna Kramer and the Lost Cause, Slim Chance & the Convicts, the recorded debut of the Eastside Pentecostal Choir and many more.

The project will be a strict CD release with limited copies available at Cabbagetown’s annual chili cook-off and bluegrass festival, Chomp & Stomp. All proceeds go to the Patch Works Art & History Center, a nonprofit dedicated to preserving the neighborhood’s historical identity, relevance and integrity. Susan Archie, a local Grammy Award winner for music packaging, will design the packaging of the CD, and longtime Atlanta music journalist Doug DeLoach will provide liner notes.

At the center of the project is the trio of James Kelly, John Dirga and Steve Seachrist. The three have been at the forefront of promoting Cabbagetown’s musical history with the recent inauguration of the Cabbagetown Concert Series last year. According to Kelly, leader of Slim Chance & the Convicts and lead organizer of the project, the concert series brought the neighborhood’s musical history into perspective. “The more we talked about the music in this neighborhood, the more we realized how much history there was and how important it is,” Kelly says.

History, indeed. Kicking off Cabbagetown Chronicles is country pioneer Fiddlin’ John Carson’s 1924 recording of “Boil Dem Cabbage Down.” Carson, a textile worker who became one of Georgia’s most popular entertainers in the 1920s, was recently memorialized in Ken Burns’ acclaimed PBS documentary series Country Music for popularizing the genre. Living on Carroll Street at the time, Carson is credited with recording the first country record ever in 1923 at a soon-to-be demolished building at 152 Nassau St.

Following “Boil Dem Cabbage Down” is the Carroll Street Troubadour’s cover of Carson’s “Be Kind to a Man When He’s Down.” This begins the triad groupings that structure the CD — an original song by a Cabbagetown musician, a cover of a song from that artist by a current or former Cabbagetown group, followed by an original by the same group. According to Kelly, this represents an old guard passing the torch to the new.

This gesture is at its most prevalent with the Carroll Street Troubadours, a group of neighbors who regularly play at the Patch Works Art & History Center. Their Carson cover was recorded in the living room of the fiddler’s old home.

“This is what we’ve been striving for,” says Jess Von Strantz of Carroll Street Troubadours, “just to get in the room, feel out the song and really embody the whole experience of the song.”

Says Kelly, “It was just so real in that room that day.”

Von Strantz, who recently moved into the neighborhood, emphasized how the communal aspect of the recording session came as a relief for someone who’s spent years touring and playing with musicians she didn’t know. She noted the parallels between the past and present during the recording process which, Kelly says, is the backbone of the project.

“Bridging the past to the present is what the record’s all about,” he says. “People have been playing songs together with their neighbors in Cabbagetown as far back as the ’20s. Now, people are still doing it but with a contemporary mindset — and it still retains that authenticity and all the roots.”

Benjamin Smoke peers out of his Cabbagetown apartment.

The next big name to grace the project is Tommy Roe, best known for his bubblegum-pop hits “Sheila” and “Dizzy” in the ’60s and for touring England with the Beatles in 1963. The retired singer spent the first six years of his life in Cabbagetown, memorialized in his 2016 memoir From Cabbagetown to Tinseltown. His track, “Cabbagetown,” is a playful rockabilly reimagining of his song “Birmingham.”

Opening the second half of the project is Smoke’s “Crook,” a previously unreleased recording from their WREK 91.1 FM session on Valentine’s Day 1995. Bill Taft and Brian Halloran, former members of Smoke who are now in W8ing4UFOs, assisted in securing tracks for this part of the project, which showcases the music scene they were directly a part of. From the avant-blues of Smoke to the genre-defying majesty of The Jody Grind, this musical resurgence cemented the neighborhood’s fearless sonic ambition.

Special cuts from the latter half include “Dirty vs. Clean,” a song from Taft and Kelly Hogan’s one-off duo, Kick Me; “Little Caesar on a Bicycle,” a live recording of The Rock*A*Teens at the Star Bar in Little Five Points in 1999; “Naked When I Want To Be,” a Moby Grape cover by Cat Power at the “Songs for Benjamin” tribute show to Benjamin Smoke at the Earl in 1999; and W8ing4UFO’s take on Cat Power’s “Headlights.”

W8ing4UFO’s cover of “Headlights” carries a significant weight as one of the closing tracks of the project. The song is a disquiet ode to Tim Ruttenber, aka street poet and performance artist Deacon Lunchbox, and The Jody Grind members Robert Hayes and Robert Clayton, all of whom died in a head-on car collision with a drunk driver on the way back to Atlanta from a gig in Pensacola. As a former member of The Jody Grind and close peer to the three, Taft’s performance with W8ing4UFOs is imbued with tension, quiet rage and impressionistic flourishes of grief. “I had not intended to live this long,” Taft says. “I had not expected to be like Ishmael in Moby Dick, looking back on a series of tragic events. But I am glad to be here; the music today is stronger than ever.”

The final performance that bookends Cabbagetown Chronicles is a cover by the Cabbagetown Children’s Choir of Joyce Brookshire’s “Cabbagetown Ballad,” which has become something of an anthem to the neighborhood. Despite her death in 2017, Brookshire’s legacy as a community activist and sharp-tongued folk singer inspired the project.

“Joyce was the catalyst for all this,” Kelly says. “She was such an important person in this community, especially to the kids. So having the kids at the end shows that it’s a circle, it just keeps going.”

When Kelly moved to Pearl Street in Cabbagetown in 1992, he would’ve never thought that the music scene he was a part of would be memorialized like this. But, as he suggests, it’s something that comes with age.

“My perspective of Cabbagetown has changed,” he says. “When I moved here I thought it was a no man’s land, but I loved the people that were here. Looking back on it now, this is a real valid historical location with deep music roots. We’ve always had some good times in Cabbagetown. There’s a real deep rooted sense of community, and this CD is an encapsulation of one part of that: the music.”