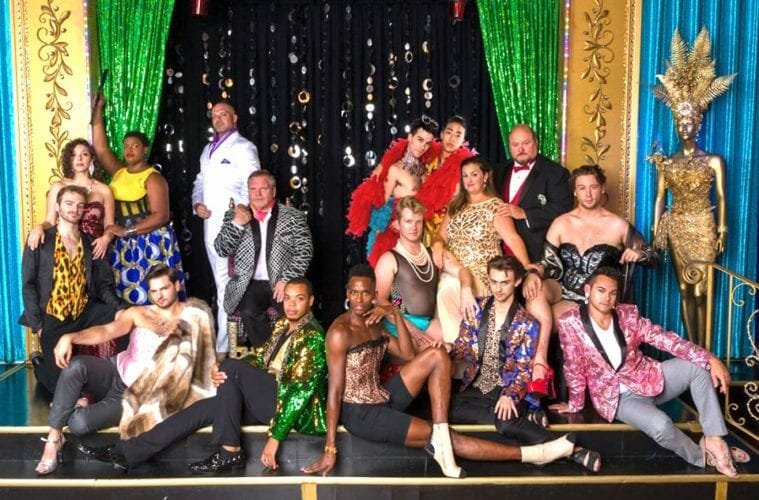 In Out Front Theatre Company’s La Cage aux Folles (through November 9), audiences meet a reimagined nuclear family. Just like in many traditional homes, there’s a father, a son and a mother — but this mother is one of the biggest drag performers in France. The setup doesn’t sound so out of the ordinary today, but in August 1983 when it premiered on Broadway, and in the pre-RuPaul’s Drag Race world, it was a sizable risk.

The musical was made more palatable in its early years by its traditional Broadway sound, thanks to the great composer/lyricist Jerry Herman (Hello, Dolly! and Mame, most notably), and its witty book by the outrageous and prolific Harvey Fierstein. It ran for more than four years and won six Tony awards, including best musical. It even had a yearlong Broadway revival in 2010–11. The members of the not-so-nuclear families in “La Cage aux Folles” are (from left) Tony Hayes and Clint Clark as Georges and Albin, with their butler/maid played by Joe Arnotti; Aaron Schilling as their son; Melanie Sheahan as his fiancée; and Marcie Millard and Robert Wayne as her parents. (Photo by Sydney Lee)

At Out Front, La Cage aux Folles is one of the fiercest drag shows you’re likely to see, with dancers doing splits and singers belting. That’s what it should always be at its core. Yet it’s also a story of forgiveness, growing up and acceptance. It flips traditional norms on their head and makes us examine our beliefs. Having two men as romantic partners who accept their son for who he is can be life-changing. Infusing this domestic story with fine dance and song makes it an even deeper pleasure.

La Cage aux Folles is no easy show, and the 16-person Out Front company works hard, especially when delivering Jordan Keyon Moncrief’s stunning choreography. Two ensemble members to note are Luke Badura and Peyton McDaniel Davis, who do those splits, flips and everything in between. In fact, the ensemble is a big reason this staging works. Clint Clark plays Albin or, as his drag-queen alter ego is known, Zaza.

Clint Clark’s Albin — the mother in the family equation and the star of the La Cage nightclub’s drag show — has bits of Tim Curry, Bette Midler and Patti LuPone in him while remaining his own man. His honest performance shows both Albin the performer and Albin the parent. His voice toes the line between musical theater and jazz standard, making his Act I curtain-closing anthem, “I Am What I Am,” all the more dramatic.

As Georges — the father in the family and the nightclub owner — Tony Hayes hits both the human and the funny moments in all the right ways. If the funny doesn’t land, La Cage becomes boring. Joe Arnotti, as Albin and Georges’ butler (he prefers to be called the maid), is another standout.

Since its premiere 36 years ago, La Cage aux Folles became the standard for LGBTQ-themed musicals. La Cage, really a very traditional musical beneath its feather boas and false eyelashes, walked so that shows like Kinky Boots (2013) and The Prom (2018; 2016 in Atlanta) could run.