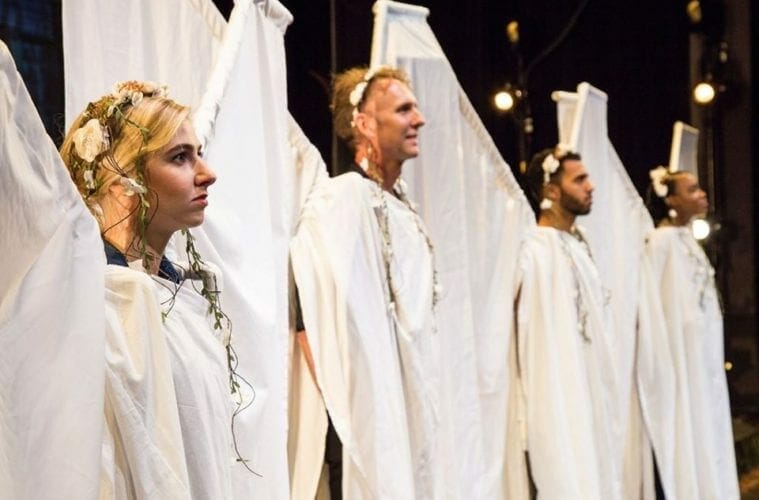 Maggie Birgel (from left), Jayson Warner Smith, Curtis Lipsey and Asia Howard as angels in Theatrical Outfit's "The Laramie Project." What would Matthew Shephard have become, his father asks. How would he have changed his piece of the world to make it better? The show runs through September 29. (Production photos by Casey Gardner)

The Laramie Project is one of those rare moments in the theater where — if you’re very, very lucky — you see a company catch lightning in a bottle. This piece, under the inspired direction of Clifton Guterman, proves that Theatrical Outfit is that kind of company, producing that kind of moment.

Matthew Shepard was born December 1, 1976, the oldest of two sons to Judy and Dennis Shepard. He died 21 years later after being robbed, beaten, pistol-whipped with a .357 Magnum and lashed tightly to a buck-and-rail fence post on a chilly, windy night near Laramie, Wyoming. (The buck-and-rail is a kinder type of fencing for animals but looks a lot like a torture device.) The bicyclist who found Matt thought the figure was a scarecrow at first, and only recognized it as human when he saw blond hair. Voluminous amounts of dried blood obscured Matt’s face, skin showing only along two channels cleared by his tears.

Four weeks later, theater maker Moisés Kaufman and members of his New York-based Tectonic Theater Project traveled to Laramie to try to learn the why of such brutality, to determine “how a community writes its own history.” Kaufman was especially interested in what he termed “watershed historical moments,” events that reveal the foundations of society’s beliefs. The Laramie Project (through September 29, in repertory with Our Town) is what grew from conversations that happened during six visits in 18 months.

If the Outfit’s Our Town was excellent — and it was — its Laramie Project is extraordinary. The why lies in the care and specificity with which its 10 actors — Maggie Birgel, Allan Edwards, Michael Hanson, Asia Howard, Curtis Lipsey, Shaun MacLean, Stacy Melich, Mary Lynn Owen, Maria Rodriguez-Sager and Jayson Warner Smith — bring 60-plus characters so vividly to life.

The tsunami of sadness surrounding Matt’s murder is leavened by the humor layered into nearly every Laramie resident we encounter. As with any city small enough to have characters that stand large, they are funny, peculiar, hateful, kind, selfless, reflective, judgmental, forgiving, open and bighearted. Each performance is imbued with authority. Each actor owns every person he or she portrays. Subtle changes — the putting on or taking off of a hunting cap, knit hat, newsboy cap, a hijab, a red blazer, a judge’s robe or priest’s collar; an accent, the turn of a wrist, the realignment of a shoulder, the deepening of a voice, a stooping posture — delineate who’s who and where we are in the telling of the story.

This journey to Laramie soars even higher with the work of set and projections designer Stephanie Busing (note the prairie vistas, the prayerful vigil and the building of a buck-and-rail fence), the music and sound design of Bennett Walton (hear the prairie wind’s lonesome howl, the oppressive cacophony of news reporters) and the lighting by Ben Rawson, which works so well with the other design elements. Maria Rodriguez-Sager as Rebecca Hilliker, head of the theater department at the University of Wyoming

The X factor here is director Guterman, who has a specific affinity for Matthew Shepard, as he explained opening night. They are the same age. Both grew up in small towns (Guterman in Iron City, Georgia, population 311). Both are blond, petite, nonathletic and into theater. “Why me?” Guterman asks. “Why am I so lucky? Why did I survive?”

Matt’s father, Dennis, asked other unanswerable questions: “What would he have become? How could he have changed his piece of the world to make it better?”

The last time I left a theater so profoundly moved and grateful was in 1999, after seeing the Broadway production of the Alfred Uhry–Jason Robert Brown musical Parade, about the lynching of Leo Frank. Like The Laramie Project, it wasn’t always easy to watch, but it was an achievement of the highest order, a great piece of art.

If you saw Angels in America at Actor’s Express two seasons ago, you have some idea of the beauty, depth, power and scope of The Laramie Project. Because it’s a true story, perhaps, it cuts even deeper and requires personal reflection.

Theatrical Outfit is dedicated to telling “stories that stir the soul.” It does some mighty stirring with The Laramie Project. And it raises the bar for all future Outfit productions. See it, cherish it and tell your friends.