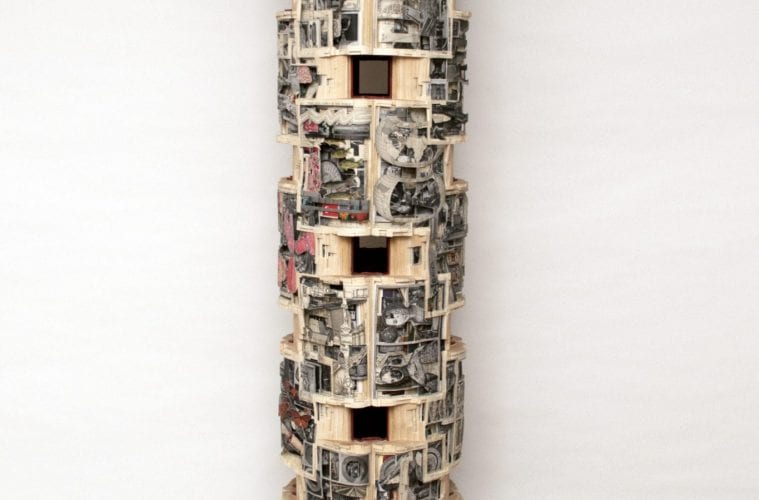 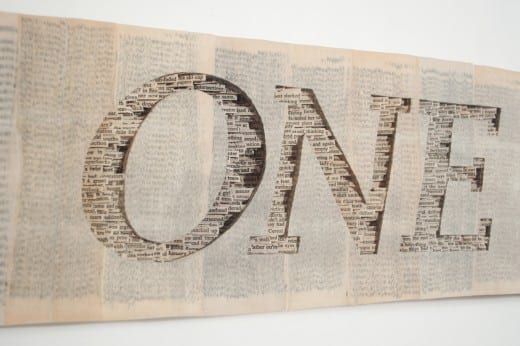 Brian Dettmer's "One Word at a Time" (detail)

“Elemental,” Brian Dettmer‘s solo exhibition on view through January 5 at the Museum of Contemporary Art of Georgia, considers the material relevance of the book within an increasingly digitized culture. Placing great importance on the physicality and objecthood of recorded history, he argues the potential loss of future histories in the age of prolific digital documentation. By literally dissecting literary and visual records of the past — old books, maps and encyclopedias — Dettmer gives new form to what might otherwise be discarded and forgotten. In doing so, he excavates a historical perspective that is psychologically and personally nuanced, asking history to retell its story, piece by piece, isolated from the often calcified narrative of our collective experience. 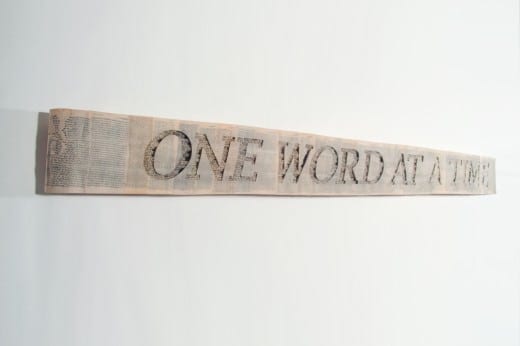 The complete "One Word at at Time"

The Atlanta artist’s meticulous process has been compared to archeological digs, surgical operations (he actually uses a scalpel) and, in his own words, “reading with a knife.” In the selections exhibited here, he condenses the time-based process of reading a book cover to cover into a single multidimensional and subjective experience. In the scroll-like wall piece “One Word at a Time,” he deploys a process analogous to William Burroughs’ “cut-ups,” combining multiple interlocking novels to form new narrative impressions.

Dettmer is less interested in conveying the authoritative message of the materials he repurposes than in allowing the content of these literary and visual relics to merge with his own intellectual and artistic drives. 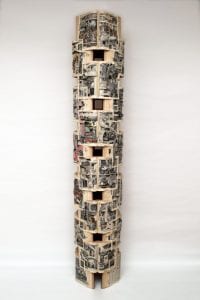 The eight-foot-tall “Britannica Tower,” fabricated from an old set of the Encyclopedia Britannica, is among the largest book composites Dettmer has shown. Reminiscent of Pieter Breughel’s “Tower of Babel,” it stands as a monument to Western intellectual and industrial triumph. At first, there is a seeming randomness in what he chooses to reveal or not reveal as he guts volume upon volume. But with further turns around this spiraling memorial, a darker encyclopedic tale emerges as relationships between words and images slowly morph into much larger themes. It seems as if Dettmer is using the West’s own Enlightenment project of reason and innovation to critique the perceived hubris and delusion of such a project.

Just as a collage artist can happen upon a composition by the accidental marriage of unlikely elements, Dettmer playfully unearths the content of his work by piecing together visual elements as they arise. The images and text that he resurrects from books hark back to the work of the Surrealists, who made dramatic use of collage in a manner that parallels Dettmer’s methods. Surrealist Andre Breton signaled the practice of creating startling visual juxtapositions as essential in conveying powerful symbolic imagery: “The more the relationship between the two juxtaposed realities is distant and true,” he said, “the stronger the image will be — the greater its emotional power and poetic reality.”

Viewing Dettmer through a modern art-historical lens offers an alternative if not more appropriate point of view regarding his use of the book as art. Marcel Duchamp’s invention of the “readymade” in 1915, while absurdist in original intent, was meant to elevate the ordinary and mundane to the status of art. Dettmer, whose hope it is to anchor our sense of history within the materiality of these conventional yet abounding objects, might also argue that the very point of presenting a repurposed book as art is to signal its already inherent richness as an art object.

The idea of the book as art form is time-honored and arguably could date back as early as the papyrus scrolls of the third century B.C. Before the Gutenberg press emerged in the 15th century, bookmaking wasn’t a matter of documentation and dissemination as much as an arduous ritual act. Early forms of woodblock printing in China combined elaborate sacred imagery and text. Illuminated manuscripts in Medieval Europe recounted the inspired wisdom of sages. But it was the printing press that single-handedly revolutionized the distribution of information as well as the canonization of ideas through mass production.

Arguably in the next major stage of the book’s history — that is, its eclipse by the computer — Dettmer’s primary task at hand is considering its future. 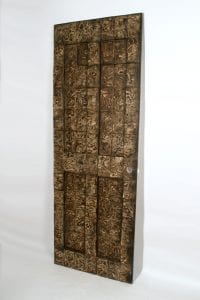 “Elemental,” the finale of his Working Artist Project grant, features work from previous trajectories alongside new, in-progress departures. The foreboding “Emergency Exit” feels like an apparition plucked from a William Faulkner novel. A new form, this literal wooden door is covered with burned book pages that mimic intricate woodgrain patterns. It stands eerily as an entryway from one life to another in a narrative undisclosed to the viewer.

Signaling an unexpected direction is the surprising “Chaos,” an enormous graphic mind-map that muses on the many interpretations of that single word. While it fits conceptually into the idea of wordplay in Dettmer’s previous work, its distinction as a slick computer-generated image suggests that it could very well be the beginning of an entirely separate body of work. 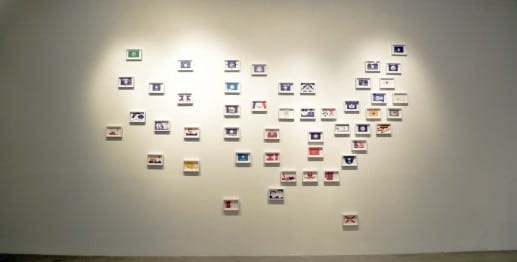 The clever “Altered States,” another refreshing exploratory work, is a series of cut-out and visually reorganized American state flags that offer a whimsical take on the notion of regional identity and the oddities of locally run government.

Dettmer said in a March interview with Book Riot that these are small prototypes for larger sculptures he plans to make in the future.