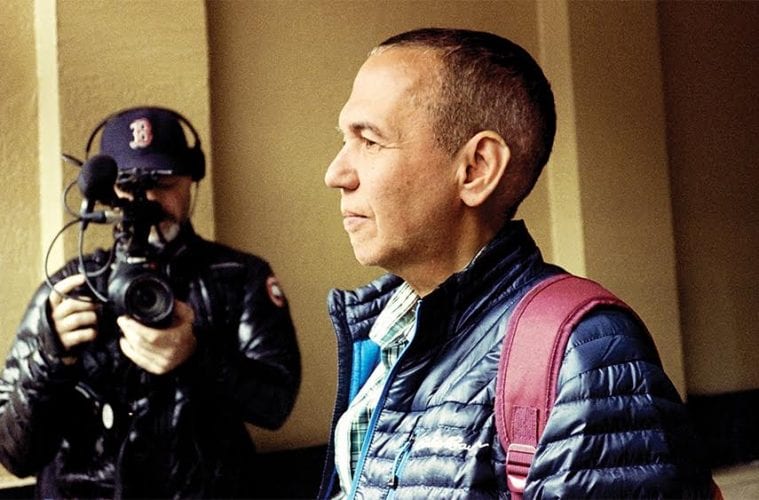 This year’s Atlanta Jewish Film Festival features a smorgasbord of documentaries that throw the spotlight on the contributions and careers of compelling artists, including Spielberg, in which the most important director of his generation personally chronicles his body of work; Itzhak, a portrait of the incomparable Israeli violinist; and Bombshell: The Hedy Lamarr Story, in which the sultry Hollywood star is also revealed to be a brilliant engineer who invented technology that thwarts torpedo jamming, and which remains instrumental in the development of cell phones, Wi-Fi and Bluetooth.

No film in the lineup proves more surprising than Neil Berkeley’s Gilbert, an intimate look into the life and career of the intensely private comic, voice artist, actor and the erstwhile voice of the Aflac spokes-duck Gilbert Gottfried.

In advance of the Atlanta Jewish Film Festival premiere of the documentary, February 8 at 7:20 p.m. at the UA Tara Theatre — a screening that will feature a Q&A with Gottfried — ArtsATL sat down with Berkeley and Gottfried to talk about career longevity, a certain former game show host who moved on to bigger things and getting in trouble on Twitter.

ArtsATL: Were you worried about pulling back the curtain in a Wizard of Oz-type way? With Gilbert, there’s a personal side and a public side. Were you concerned about exposing the illusion?

Neil Berkeley: Yeah. As everyone knows, he’s a very private guy and he didn’t really think he was told that we were going to do this. His wife sort of arranged everything with me and set it all up, and I just kind of showed up one day and started going over there every day at nine in the morning and talking to him. It took a while to sort of break thorough and have everyone be comfortable.

Gilbert Gottfried: Neil had come up to me and said, “I always dreamt of doing a Gilbert Gottfried documentary,” and I said to him, “Well, you should set your dreams a lot higher than that.” But then he started following me. It was a weird thing because I never agreed to it, and if I wanted to, at the last second, I could have said, “No, I don’t feel like being a part of this.” 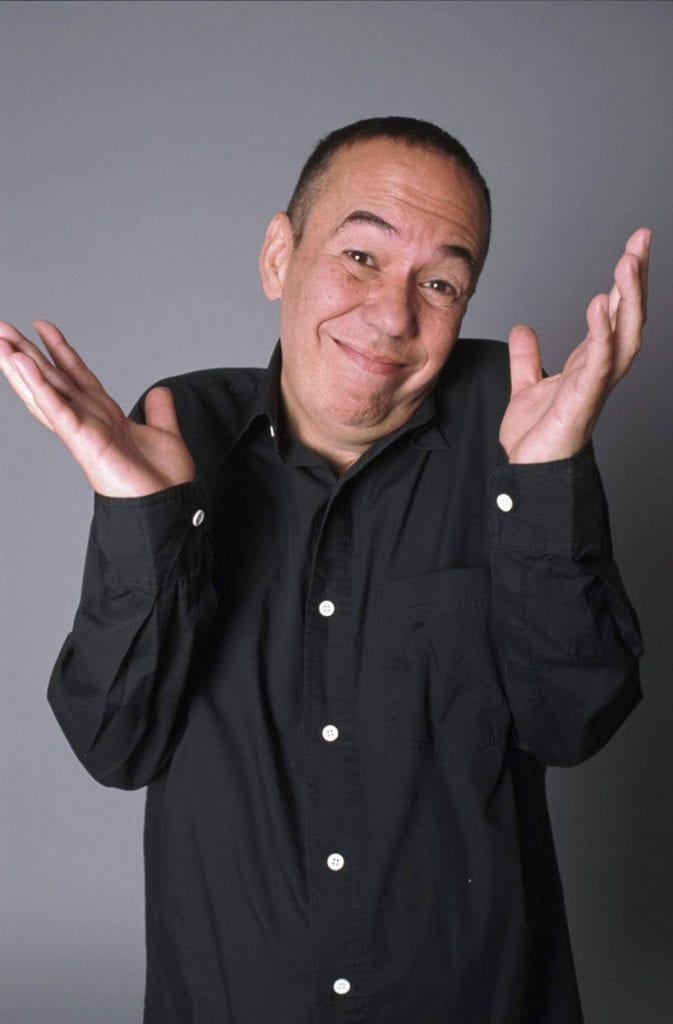 Gottfried says it’s a comedian’s duty to provoke with laughter.

Berkeley: That’s true. We didn’t really make if official, contractually or legally, until after it was in Tribeca and after Gilbert saw it the first time.

ArtsATL: So, it was like, “Oh, now I see, you made a movie!” That was a huge gamble. What was the breakthrough moment when you knew that you had a film?

Berkeley: It’s hard to say exactly when. You just know. A lot of different things happened. I think it was when we were with his sister Arlene. They had a conversation about the things I wanted to talk about. She was definitely opening up to me a lot. So I think that gave everyone else permission to talk, and that let me shoot certain things. But there was definitely a time where it shifted gears from just a very casual thing to, “Okay, we’re talking about some very personal stuff and we’re certainly seeing a side of Gilbert that no one’s ever seen before.”

ArtsATL: As somebody who is private and has a very well established public persona, when did you decide if these on-camera moments were a performance or an intimate conversation?

Gottfried: That was tricky. It was a scary thing. Like just being naked in front of people. And if you’ve ever seen me naked, you know it’s very scary.

ArtsATL: When you were coming up, other comics like Bobcat Goldthwait, Emo Phillips, Sam Kinison, Steven Wright and others were also all playing a character on stage. You’ve cultivated a well-defined stage (and screen) persona. While many of your contemporaries have pivoted or fallen out of the spotlight, you maintained your persona. How did you manage to stay relevant and keep the character current?

Gottfried: It’s very tricky. The way I talk on stage, my whole delivery and everything, I never sat down consciously and thought about it. Over a period of time, you find yourself, you have a personality, and a way of speaking, the type of material you do. I never gave it any thought as far as staying relevant, but boy, oh boy, maybe it’s just luck.

ArtsATL: What was the biggest surprise during the production?

Berkeley: Meeting [Gottfried’s wife] Dara and the kids. That’s the thing people react to the most — not even knowing they exist. She’s amazing. She was wonderful the whole time, and the kids were really great in the film. I also got really close to his sister Arlene, and it was a pleasure getting to know her. I am really happy that we got to show her work and that the world will get to know her. Getting to meet these people and the fact that he is so close to his amazing family is a surprise. It shouldn’t be a surprise to learn that someone has a family that loves them, but for Gilbert, it really is a pleasant surprise.

ArtsATL: What was it like sharing that with the world, putting those who are so close to you, particularly your wife, on display like that?

Gottfried: It was that thing of worlds colliding. I have always been uncomfortable, even if I have two friends, and we’re in a situation together, and I know them from two different sides of my life, I get really uncomfortable. Because I am like this way with one friend, I act a different way with another, or with a family member. That always made me uncomfortable. But I really like that there is a whole portion with my sister. I was very happy that I did the documentary just so that it could show her, and people are able to see it.

ArtsATL: We’re in a very challenging time. You’ve been through your fair share of controversy around language and Twitter and so forth. In this age of super vulnerability to sensitive language and “safe spaces” and hyper attention to people being offended by things people say, what do you think is the role of a comic, and how do you navigate those waters now?

Gottfried: I have a favorite quote from George Carlin where he says that he thinks it’s the duty of a comedian to find out where the line is drawn and then deliberately cross over it.

Gottfried: It’s hard to know anymore. When I talk in terms of young comics, I catch myself after a while being like one of those people who says things like, “Oh see, in my day we knew how to do things, and now they don’t.” It’s kind of like how I used to avoid reality TV. I used to always say “no” to it. Then after a while I felt like one of these theater actors who goes, “Well, theater is the important thing, and TV is just a fad.”

Gottfried became known for the roasts aired on Comedy Central.

ArtsATL: You are notable for that great bit in the documentary The Aristocrats, performing the notoriously vulgar routine in New York City, in the wake of 9/11. Is it harder as a comic now that the New York Times and network TV news anchors are literally saying the word “shithole” on the air and in the headlines? Does that make your job harder?

Gottfried: It can be. However, I love when the media, the “serious, respected media,” goes, “Oh, good. We can say it, we can say it!” And they really reveal themselves. Like when the Anthony Weiner scandal was going on and everybody, all these respected journalists and papers were all doing sexual puns on the word “wiener.”

ArtsATL: You famously did a number of roasts, including one of someone who went on to become president. Did you ever think that was going to happen?

Gottfried: Yeah, that was my roast of Roosevelt. At the time I was doing Celebrity Apprentice [and at the Comedy Central roast of Donald Trump] he was basically just a game show host. And I was campaigning for Pat Sajack.

ArtsATL: Was there anything in the film that you really wanted to keep that you ended up having to cut?

Berkeley: There’s tons and tons of tons of stuff. I shot almost 400 hours for this. There are some scenes with this step-sister Arlene. There was no room in the movie, but there’s great conversation where they talk [about] what they talk about, and it turns out they only talk about seltzer.

Berkeley: There’s also a bunch of stuff with the kids, but I think we got all that good stuff in there. We put a lot of extras on social media, and the DVD has a bunch of extra stuff. You know, we got the important stuff in there, the footage with the Nazis made the cut.

Gottfried: [laughter] Yeah, I’d have walked out on it if he’d cut the Nazis and they weren’t in it.

ArtsATL: Given how edgy some of his material is, is there anything that you had serious reservations about keeping in?

Gottfried: There is one joke that’s in the movie that Dara came up to me, and she said, “If you use that joke in this movie I’ll never talk to you again.” And I put it in there and it’s in there. And she said to me, “I hate that joke. My kids will never see this movie, but I understand why it’s in there.” It does all fit in because it shows that you can say the most horrible things in the world and that doesn’t make you a dangerous person, or an unfeeling person.

ArtsATL: You point out something really important here. I don’t want to throw anybody specifically under the bus, although there are a lot of people being dragged under buses right now. You caused a stir with a controversial tweet after the Japanese tsunami. Now that we’re seeing comics and others being punished for gross actions, which you need to hold people accountable for, in terms of finding things offensive, what offends you?

Gottfried: It’s funny with what’s going on now with these sexual harassment scandals and everything. Somebody tweeted me and they said, when we just sent out a tweet they said, “Remember when Gilbert Gottfried lost one job because of some jokes he made? Can we please go back to that time?”