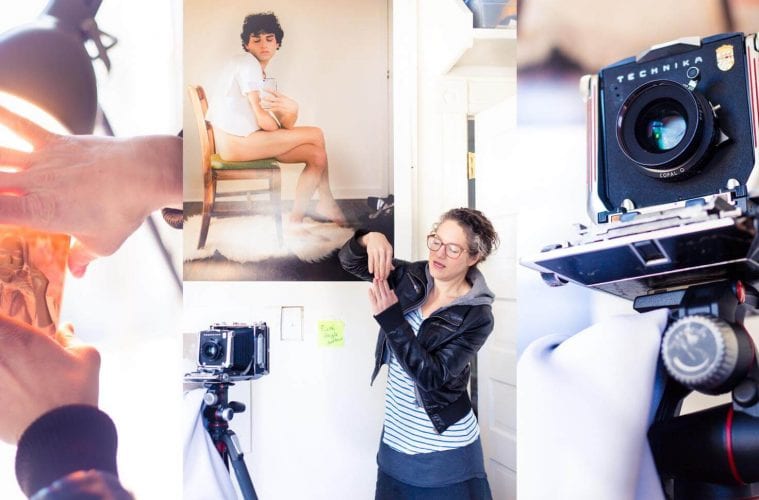 In the studio with photographer Jill Frank

The first thing that catches my eye in Jill Frank’s studio in the front room of her Grant Park bungalow is the print of a familiar photograph, her strangely haunting image of a young woman with flowing red hair and an intense, anxious gaze.

ArtsATL: I was so curious about this girl when I saw this image in your show at MOCA-GA. Can you tell me about her? Who is she? What was going on here?

Jill Frank: It was in Athens. . . . I was interested in the architecture of this neighborhood because it was really strange, all these multicolored houses. I want to say it was student housing, but it wasn’t quite. It was a new development that looked almost like Cabbagetown, but creepy, Stepford Wives-y. I was going to Athens to give a talk, so I thought I’d photograph it, and I brought an assistant with me. She said, “My brother and his friends at UGA are having this huge house party.” At the time I was also really interested in youth culture and its rituals. But I’m pretty careful about boundaries — my students are this age — so I’m always allergic to being in the same room as something dramatic or illegal happening. Instead of going to the party where my assistant’s brother and his 18- to 21-year-old friends were drinking, I went to the house early the next morning. All of these kids started trickling out. There was nothing planned, and I didn’t know what I would get. I said to each person as they were coming out, “This just takes like 60 seconds.” I photographed each one twice as they were coming out. It was a special shoot. I didn’t know I was photographing people; I thought I was photographing houses. ArtsATL: That anxiety in her face, though. Do you know what that was about?

Frank: She was definitely the most interesting person I met that day. She said she had just gone through a breakup. You can see evidence of her crying. She was just a lovely person. It’s fair to say these guys had been up all night drinking.

ArtsATL: And you think the breakup had happened that previous night?

Frank: I guess so. I only had a 10-minute interaction with her, and then I never saw her again.

ArtsATL: Did anyone in the pictures come to the MOCA show?

Frank: Yes. A lot of kids I’d photographed in Atlanta came. This guy lives in Athens and goes to UGA. His mom and dad came. They asked if they could buy the photograph. It’s a four-by-five-foot double-sided image of their son, hungover, shirtless, after a party . . . I don’t sell work a lot. I’m not embarrassed about it. It’s the thing about making highly representational portraits of people that other people don’t know. It’s fine. The people who do buy it, it usually has an institutional energy to it.

Frank: Yes. You start with a piece of film, they look like X-rays, and you slide it into the camera.

ArtsATL: How many pictures are in one of those yellow boxes when it’s new?

ArtsATL: So you really have to get each picture right?

Frank: Each shot is $5. And then I pay to have it processed. Each picture I take is $10, if I’m extremely careful. The lab I used in Atlanta closed about five years ago, and now everything is shipped to New York. It’s hard because I would shoot much more if there were a lab here. ArtsATL: What is the process?

Frank: I get the negative back. I can make a very bad digital version of it at home on my 90s scanner, and if I like it, I invest. If I want to make a print, I have to pay for a drum scan. One scan is $100. It comes back as a digital file. Then I can work on it. I then send the digital file to a place that translates the digital file into a dark room print.

It’s kind of crazy because you start out with this super-old camera and super-old process and it goes through this digital ridiculousness, and then you end up back in an analog process. If it were up to me, it would just be really simple and straightforward. It’s already stupid to shoot with this camera. I’ve been thinking about why I do it, it’s so expensive. I could shoot with another camera, but what I’m interested in has to do with a heightened sense of awareness. I’m specifically interested in taking what we dismiss culturally as not important and turning it into something really complicated, asking you to pay a lot more attention to it. I’m going to give you every possible detail. Details that are two inches on an iPhone screen will be four or five feet. The digital version of this camera would be like $50,000, and it’s not even as good, to be honest. And I go to some weird places. I don’t want a $50,000 camera. If someone stole this, it would just be like: really?! It feels like a safety measure.

I’m really tied to that content, and unfortunately the content is tied to a really arduous process. Large format film has more color — and a more subtle range of color — than anything. There’s no digital camera that I could afford that could do this. I’m interested in simple things, and making simple things more complicated. I think that’s what all photographers are interested in. . . . If you’re photographing houses, you’ll nail it. But with people you have no idea. If they blink, if they shift, the plane of focus is really tiny, so if someone moves, they’re out of focus. . . . After you tell someone to freeze, at a certain point, you’re blind for a few seconds. Some cameras, you look through a series of prismed mirrors in order to see what you’re shooting. This has no place for that. You’re looking through the same place that the film blocks.

ArtsATL: Do you worry a lot when images come back from the lab and you unwrap them for the first time?

Frank: I joke about it. I’m not happy about these latest shoots, so I’m not scanning them as a weird passive-aggressive way of managing my anxiety about them. I could scan them in no time. I’m letting some of my expectations go. It won’t last long. I think I’m past the weird thing now, but I will do that for a long time.

Frank: I use a large-format camera on a tripod, so there’s no way I could sneak up on people. . . . People get tired of standing and holding a pose. A cool thing happens when they get frustrated. The slower you go, something good happens. ArtsATL: What kind of camera do you use?

Frank: It’s a Linhof Technika 4. It’s from 1954. It’s not an uncommon camera. Anyone who wants to do this who’s not super-wealthy can. I’m a slow person. I don’t want to rush. I’m kind of awkward with a smaller camera. Somehow I caught that weird thing.

ArtsATL: How did you first get into this sort of photography?

Frank: We say, “I’m photo-photo.” It’s like painter-painter. Someone who’s still doing the most original, conventional version of whatever it is. I went to a really photo-photo school, Bard. My professor was Stephen Shore. I can still hear critiques, there’s no way that’s not from him. “Why did you cut the shoe out of the frame?” Where you put your frame of focus is a huge deal. I’m afraid people who learn first digitally don’t learn that. You have to work so hard to make your choices. . . . This is really a camera for in-studio and controlled stuff. And I’m taking it to places where most people are drunk.

ArtsATL: You photograph a lot of young people. What was that time of your life like for you? Do you think about that a lot in your work?

Frank: That’s a good question, and it’s funny I’ve never had to answer it. I’m 39. For a while, I was making these photographs of couples trying to hold romantic poses and not being able to during a time when I had just ended a ten-year relationship. It was me observing other people, like an anthropologist. It’s not dissimilar with this. I think these things are so important. Someone can feel empowered and feel they’ve gotten a lot of agency from something that seems incredibly trivial to us. The pictures are about that space between the things we joke about and the things that are really serious. That’s what interests me.