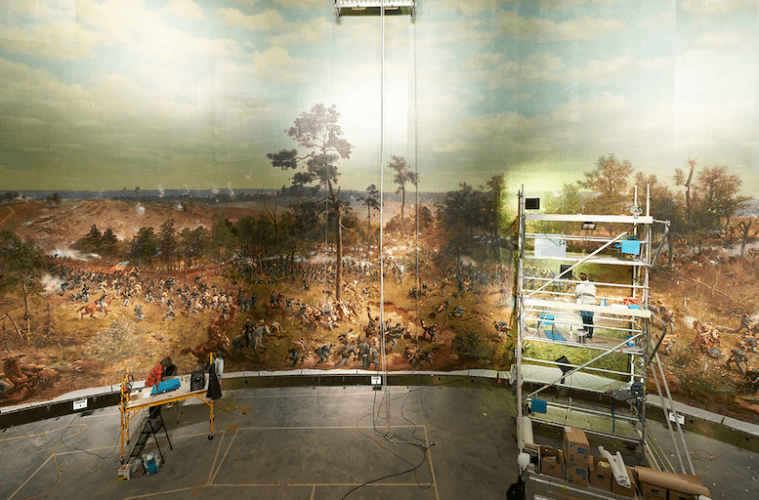 Video: A behind-the-scenes visit to the new home of the historic Cyclorama

For a brief period of time, cycloramas were the IMAX films of the day. Longer than a football field and wrapped in a circle, the panoramic paintings offered the first artistic immersive experience.

The Battle of Atlanta Cyclorama, painted by 17 German artists for the American Panorama Company in Milwaukee, debuted in 1886 and went on permanent display in a modified form in Grant Park in 1921. The Grant Park space was too small for the massive canvas, and a 6-foot-wide section of the painting was cut out in order to make it fit.

In 2014, the City of Atlanta reached an agreement with the Atlanta History Center to move the Battle of Atlanta Cyclorama to a new building there and to restore it to its full size — 49-feet tall with a circumference of 371 feet.

The restored Cyclorama, one of only two surviving cycloramas still on exhibit in North America, debuts today in the Lloyd and Mary Ann Whitaker Cyclorama Building at the Atlanta History Center. It is a vivid portrait of one of the city’s key historical moments: the defeat of Confederate troops in 1864 that led to the burning of Atlanta and Sherman’s infamous March to the Sea.

ARTS ATL videographer Felipe Barral goes behind the scenes to look at the history center’s restoration efforts and explores what a painting of a signature Civil War battle can represent and mean to us today.

Among the elements of the new exhibition, the Atlanta History Center has developed four short fictional pieces in which actors tell different stories about the Cyclorama.

As an added bonus, in a second video below, Barral captures the performance of actor Damian Lockhart, who portrays a black post-Reconstruction journalist, and explores his experiences with the Cyclorama and the deep questions it raises.