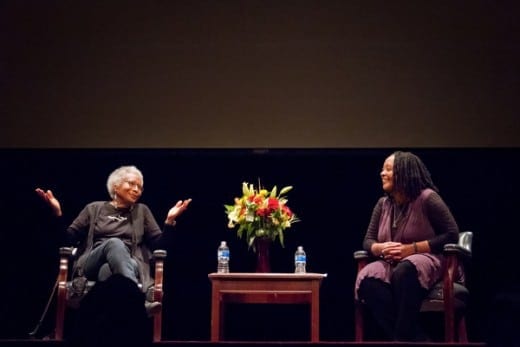 Alice Walker and Valerie Boyd in conversation in 2013. (Photo by Phields Photography)

Valerie Boyd vividly recalls the first time she came face to face with her literary hero 30 years ago. “It was the way everybody else meets Alice Walker — as a trembling fan, walking up to her and asking her to sign a book,” says the author and University of Georgia professor.

The book was The Color Purple — winner of the 1983 Pulitzer Prize in Fiction and the National Book Award — and required reading for Boyd’s freshman class in African-American literature at Northwestern University. “I found myself and my rural relatives reflected in her work in a way that I hadn’t in any other literature,” say Boyd, an Atlantan born and bred. “Alice writes about black female interiority in a way that crosses class and cultural lines.

“There are a lot of people writing in that tradition now [including Toni Morrison, Elizabeth Alexander and Natasha Trethewey], but Alice has been at the forefront for five decades.”

Boyd, associate professor of journalism and Charlayne Hunter-Gault distinguished writer in residence at UGA, has come a long way since her days as a star-struck undergraduate. In 1997, she co-founded the Alice Walker Literary Society with the late Emory professor Rudolph Byrd and Spelman professor Beverly Guy-Sheftall. It is based at Emory University in collaboration with Spelman College.

She wrote the critically acclaimed biography, Wrapped in Rainbows: The Life of Zora Neale Hurston, in 2004, for which Walker wrote a blurb. In 2007, she helped Randall Burkett (then Emory’s curator of African-American Collections) acquire Walker’s papers for the university’s Stuart A. Rose Manuscript, Archives, and Rare Book Library (MARBL).

Boyd and Walker will be in conversation at the University of Georgia’s Morton Theater on October 15.

MARBL was not on Walker’s radar when deciding where to place her memorabilia, journals and manuscripts dating back to the 1950s. But a trip to Atlanta changed her mind. “Emory struck me, on visiting it, to have light, a compassionate and thoughtful light, that made even the buildings seem softer and more inviting than those I encountered in other places.”

Today, most of the archive is accessible to visitors, whether it’s for scholarly research or just to see the blue jeans and cowboy boots Walker called her “uniform” during years as a student protestor. For 60 years, Walker has also been at the vanguard of causes, including women’s liberation, the Free Palestine Movement and the Anti-Apartheid Movement.

Her diaries, however, are restricted until 2027 or Walker’s death (whichever comes later). Boyd — who has been authorized to curate, select and edit the 65 spiral-bound notebooks, composition books, legal pads and hand-bound leather journals that make up the collection — is the sole exception.

The anthology, Gathering Blossoms Under Fire: The Journals of Alice Walker, will be published by Simon & Schuster in 2017. The title comes from a poem Walker wrote about enduring an onslaught of criticism but still noticing the flowers.

“Courage is the fundamental offering of these journals,” Walker wrote. “Patience with the critical inner and outer voice is next. Love of growth and truth rounds out the trio.”

Boyd, who has divided the book by decades, will open each section with an essay she writes that will contextualize what was happening in Walker’s life and the wider world at the time. Excerpted journal entries will follow, after which Walker will contribute a response to her younger musings. Thus, “71-year-old Alice will be in conversation with her 31-year-old self, her 41-year-old self and so on,” Boyd says.

Boyd promises the book will paint an unvarnished portrait. “Alice is the freest human being I know. She has not placed any stipulation on me, or told me anything was off limits.”

In fact, Walker’s only request came in an email stating, “A flawed humanity is the only kind of humanity I know. Please don’t change a word [of my diaries] for me.”

Though considered a classic of American literature now, The Color Purple’s detailing of domestic abuse and lesbian love was considered revolutionary back in 1982. “The material was upsetting to a lot of people, but in spite of being the target of so much rage, Alice maintained her focus on beauty and encouraged us to do the same,” says Boyd.

It’s a way of being she learned at home. Walker grew up poor in Eatonton, Georgia, the youngest of eight children. But the family’s hardscrabble life was transfigured by her mother’s insistence upon beauty: whether it meant papering the rough-hewn walls of their sharecropper’s shack with pretty pictures from the local newspaper, quilting or tending to her flower garden.

This project is imbued with a full-circle feeling. As Boyd says, “Zora’s, Alice’s and my generations are holding hands.” Walker’s 1975 article “In Search of Zora Neale Hurston” for Ms. magazine helped revive interest in Hurston’s essays, novels and short stories. “When I came along a generation later,” she says, “I discovered a literary grandmother [in Hurston], thanks to Alice’s initiative as a 29-year-old.”

On her first day at MARBL, as she held a pair of scissors aloft to clip the fabric that bound Walker’s journals together for the trip from her home in Berkeley, California, vestiges of the one-time “trembling fan” bubbled to the surface. “I was scared… excited… and nervous. It was like Christmas morning,” Boyd says. “It felt like the first step of an auspicious journey.”

Walker is just as moved by the partnership. “I can’t help feeling the imprint of the ancestors on the happy occurrence… that Valerie Boyd has emerged to stand beside me.”