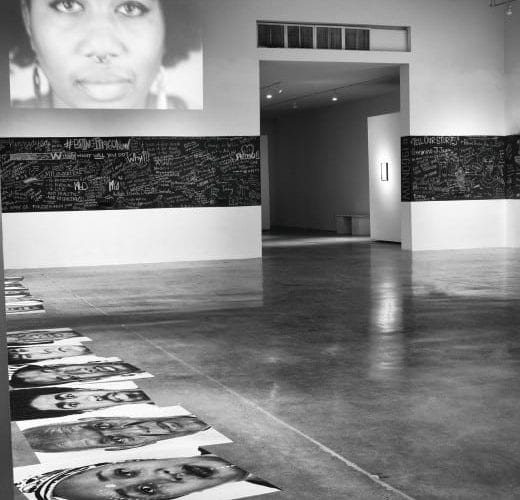 Photographer Sheila Pree Bright describes 1960Now, her solo show at the Museum of Contemporary Art of Georgia, as a “participatory and interactive exhibition interpreting intergenerational views of activism through social engaged art.”

The climax of her Working Artist Project fellowship, it presents, as its title suggests, a continuum of activism from the ’60s to the present-day protests ignited by recent deaths of black men at the hands of police.

This is a show in black and white — black and white photography, black and white video, black chalkboard on white walls. It’s a striking installation. Maybe too striking. Bright seems to have privileged design over content, to the detriment of the civil rights heroes and young activists she intended to honor.

1960Now evolved from the public art series Bright launched four years ago, in which she pasted oversized black and white images of the unsung faces of the ’60s Civil Rights Movement on walls in downtown Atlanta. 1960Who was effective because she made her subjects — and, in so doing, her subject — larger than life, enlivening both person and idea visually as well as metaphorically. The scale and presence of the work successfully delivered the message that these faces and the struggle they represent are worthy of attention and re-consideration. Many of the 30 portraits in 1960Now are mostly older faces of the formerly young people who changed the state of the nation (some from her previous series). The difference is that the photos now lie on the floor in an arrangement that appears careless — more strewn than placed — and in danger of being stepped on.

It is possible that she intended their placement as metaphoric — grassroots, boots on the ground, foot-soldier level. Instead it looks like a haphazardly culled coda to the previous project, one disrespectful to her subjects. We owe these women and men our respect for their ongoing bravery, conviction and sacrifice — and perhaps an answer as to what we have done to honor it in the years since. Instead of staring up at you from beneath your feet, they deserve to be looked squarely in the eye.

Making matters worse, these individuals are virtually anonymous: There are no identifying labels, only a hard-to-follow listings in the gallery’s accompanying pamphlet. 1960Now: Art + Intersections, an eight-minute video shown on two facing screens embedded in chalkboards, is also problematic. Bright traveled to Ferguson, where Michael Brown, an unarmed black teenager was shot and killed by a white policeman, and to Baltimore following the death of Freddie Gray, who sustained a fatal spinal cord injury while in police custody, to film some of the footage. It seems odd that the artist would show the result of all that effort on a small iPad that is lost amid the messages on the chalkboard. Situating the videos in this way diminishes, rather than enhances, their power.

This is too bad because there are stirring moments, mostly from the civil rights activists in the historical clips. Nina Simone (think “Mississippi Goddam”) makes a powerful appearance. Staring directly at the camera, she reminds us that “the artist’s duty is to reflect the times,” and asks, “How can you be an artist and not reflect the times?” The refined and eloquent writer James Baldwin, and a more directly insistent Stokely Carmichael, the charismatic chairman of the Student Nonviolent Coordinating Committee, deliver moving characterizations of the breadth of the movement.

Two of three photographs on the back wall, both titled 1960Now: Atlanta, Baltimore, DC, Ferguson, are stills of the protests documented in the video. Printed on aluminum, they seem slick, remote, emotionless and, again, more design than message. The third photo, larger and more compelling, is an impressive nighttime photograph titled 1960Now. Unlike the other two photographs, this one feels infused with the artist’s intent. In it, a face, one of Bright’s large-scale black and white photographs, solitary, abiding, is pasted on a distant wall in an empty lot — shades of 1960Who.

As is the case with the portraits and the video, there is no wall text or label to identify the subject. (He is Charles Person, who as a young Freedom Rider was beaten by Alabama Klansmen for refusing to go to the back of the bus.) Were informational labels, which could have added context, eschewed because they would clutter the installation?

The chalkboards are a good idea; they succeed in encouraging the dialogue and engagement Bright aims for. Perhaps surprisingly, given the content of the video, these scrawled thoughts and concerns were mostly expressions of hope. We gon’ be alright! Learn from the past. Change is on the way. #all lives matter. Do what u love or u have no purpose. Another wrote the Golden Rule. Do unto others… And one just directed a really good suggestion to the photographer: This should be on a larger screen.

In drawing parallels between past and current civil rights movements, 1960Now makes the point that achieving racial equity is an ongoing challenge. But does it help viewers to “critically look at ongoing social and political struggles,” as she puts it?

Beyond an invitation to visitors to write their thoughts and reactions on the chalkboards (already full when I viewed the show), Bright’s installation does little to encourage, and actually thwarts, the participatory and interactive qualities she desired.

Because the newest aspect of her work — the videos — are subverted by their presentation, the show seems more like a rerun of her previous project. The exhibition feels like a look back rather than a way forward — a fact that belies her dedication and defeats her goals.