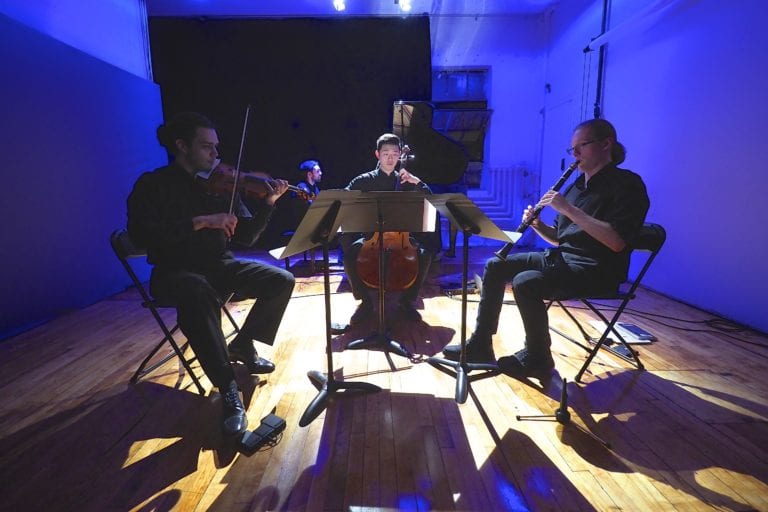 The Unheard-of//Ensemble performs at GSU this Friday. (Photo by Michael Yu)

This Friday, the Unheard-of//Ensemble returns to town as part of a Southern tour in support of Unheard-of//Dialogues, a powerfully evocative album that released in January. The album features works by eight different composers including Nickitas Demos, director of the School of Music at Georgia State University.

The collaboration with Demos began in 2016, when the ensemble met him at Atlanta’s Mammal Gallery while performing on a shared bill with Chamber Cartel. Inspired by their meeting, the ensemble began tackling Demos’ “Frontlash,” one of his earliest works that ultimately acted as a catalyst for the debut album.

“Nick has been with us over this two-year process from the work’s premiere at Carnegie Hall in 2017 to the album release concert at Tenri Cultural Institute in Manhattan this [past] January,” clarinetist Ford Fourqurean says.

In addition to Fourqurean, Matheus Souza (violin), Issei Herr (cello) and Daniel Anastasio (piano) form the core of the ensemble, which is dedicated to the development and performance of new music by living composers.

“The album presents a mosaic of different styles, opinions and stories, which showcase the fruitful and informative experiences from our past year’s touring,” Fourqurean says.

A straight play-through of the album shows the technical and instrumental prowess of the ensemble, reaching full circle with “Frontlash” as the finale. The track confronts the seemingly impossible ability to escape the political turmoil that surrounds the White House, with a frontlash being defined as a counter-reaction to a political backlash.

While each instrument receives a solo on the piece that bellows with hope, the individual sounds are abruptly interrupted, effectively reflecting the composer’s purpose of holding a mirror to the politics that drowns out singular voices amongst the noise.