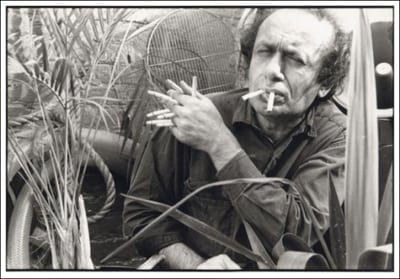 Tonight’s Film Love event, “Open to You,” features classic early video works by the pioneering artist Vito Acconci. Curator Andy Ditzler will introduce the works before the 8 p.m. screening at Atlanta’s Eyedrum music and arts space, but I invited him to share with us some thoughts on Acconci, perhaps as an extra enticement to attend. — Cathy 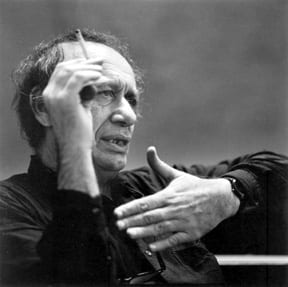 From 1969 to about 1973, in the course of his remarkable journey from experimental poet to art-world visionary, Vito Acconci created a staggering amount of work: performances, “activities,” photos, films, videos, writings, installations, audio.

Most of these activities center on Acconci’s body. This artist is famous for the extent to which he used his body in art works: pushing it to extremes, putting it on the line, changing its function. But the body is home to the self, and it is this idea of self that is at the heart of Acconci’s work.

Usually this idea is expressed as a form of paradox or a relationship between opposites: between self and other, or between “I” and “you”; the relationship between public and private selves, between opening up and closing off. Often, these works consist of nothing more than a simple action, performed in a certain space and repeated for a length of time. Yet those actions and their repetitions open up myriad questions and dialogues.

In “Claim,” Acconci sits blindfolded at the bottom of a basement stairway, swinging a heavy metal pipe and chanting himself into a state of aggression: “I want to be alone down here, I’ll hate anybody who comes down the stairs, I have to make myself believe this…” “Claim” shows a double possession: Acconci undergoes a kind of possession ritual in his body, in order to possess and defend his basement space. Paradox: in order to claim his space, he must lose himself.

In “Open Book,” the camera focuses tightly on Acconci’s mouth. For ten minutes, he attempts to keep that mouth fixed wide open, while delivering a monologue on openness: “I won’t close anyone out, I’m open to you, come inside…” The words are just barely intelligible; Acconci coughs, splutters, practically drools in his attempt not to shut his mouth. This doomed attempt to simultaneously demonstrate and communicate openness is both absurd and touching. 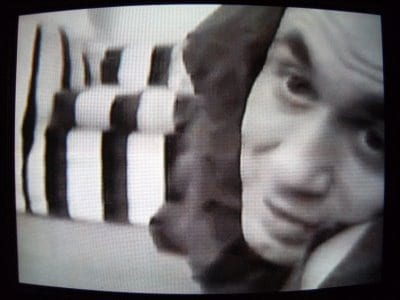 Acconci in a still from “Theme Song.”

In “Theme Song,” Acconci is lying on the floor, facing the camera — his head fills half of the frame. Just off camera, there is a cassette deck. He puts in a tape; it’s the Doors, Jim Morrison is singing “I can’t see your face in my mind…” Acconci hums along, then uses that line on the viewer: “Ah, of course I can’t see your face, I have no idea what your face looks like…”

Thus begins a 30-minute, single-take attempt at seducing the viewer (“you”) — an existential come-on that can never be consummated, because he’s in the video and “you” are…out there, somewhere…or not, maybe “you” are not even there… “so I’ll just have to wait for you.” All the while, he changes the cassettes and the songs come out: Van Morrison, Dylan, he’s a medium for the songs, the lines travel into his head and come out of his mouth as seduction. It’s disturbingly intimate, even creepy, but fascinating and full of hilarious lines. It’s a great performance — blatantly manipulative yet quite vulnerable at the same time.

But these descriptions of the ideas in these pieces don’t get across how riveting they are to watch: emotional, sometimes disturbing, always so human. It’s not often mentioned how funny these works are. Viewing them is the furthest thing from a purely intellectual exercise. And there lies one of the biggest paradoxes in Acconci’s work: that such self-effacing pieces should be performed through the medium of so charismatic a personality. That face, that voice, those words – Vito Acconci is a natural presence on the screen (or should I say in the frame).

There’s a moment in the middle of “Theme Song” when we hear Van Morrison on the cassette deck, singing about a ballerina, and it prompts a lyrical flight from Acconci (again, talking straight to the camera, pleading for the viewer to get closer to him):

“Sure, you can be on stage, you can be on stage with me … I’ll put you in the spotlight … I’ll just draw back into the distance far away … you have the spotlight baby, it’s all yours … I’ll admire you, I’d love you … I’ll watch every move you make, I’d love every move you make … it’s as if I’m an audience … as if I’m an audience and I have to applaud at everything you do…”

And for that moment, it’s easy to believe that the tables have been turned: we in the audience are the object; Acconci has become the voyeur, and the selves have switched. Like so many moments in his work, it brings to mind a line from another song heard in “Theme Song,” the Velvet Underground’s “Pale Blue Eyes”: