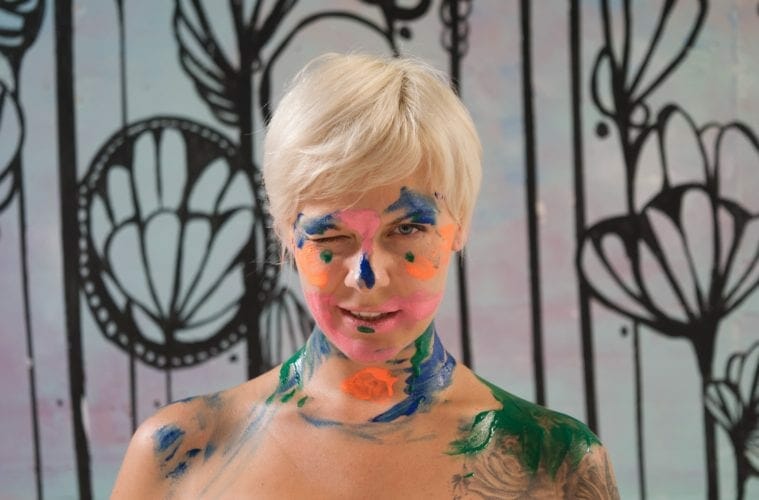 Today in street art: The ins and outs of collaborative muralist Lela Brunet

Art found Lela Brunet early in life, when her mom let her draw on the bedroom walls. They could always be painted over when Lela tired of the project, she reasoned. Brunet (pronounced “brunette”) now does similar work for a living.

“I didn’t actually take an art class until college,” Brunet says, “and it was like magic. I took it to just fill in a thing. I always did art, but I’d never taken a class.”

Five years ago, she decided to take a chance and work on her art exclusively. She found a home away from home at Kibbee Gallery in northeast Atlanta, designed the Wandering Blues beer label for Orpheus Brewing, had an exhibit at Kai Lin Art and got her first taste of large-scale mural work with the Forward Warrior project. “Energetic, pattern-driven,” she says. “I like to do a lot of figurative work with the female figure, but I don’t always do that. I like to work with a lot of different materials.” Her newer work includes abstract landscapes, shapes and color, and she’s added gold leaf — rare in murals — to her toolbox. (Note that she hates to answer this question.)

Brunet, 34, considers herself a Georgia Peach. She was born in Louisiana, where her dad’s work had taken the family, but they were in Georgia by the time she was three. She has a B.A. in art education from Kennesaw State University and lives in Smyrna with husband Stephen Raymond, a drummer, and their two-year-old son, Charlie. Her studio is in Atlanta’s West End. A major wall at Colony Square in Midtown in collaboration with muralists Molly Rose Freeman, Lauren Pallotta Stumberg and Laura Vela. The team’s first mural for The Edge, Persephone Rising, was featured in our April 11 street art column. Also, the Starbucks in Midtown at Fourth and Spring streets.

MURALS INSIDE AND OUT:

In addition to Colony Square, you can see Brunet’s outside walls at Heards Ferry Elementary School, Hodgepodge Coffeehouse on Moreland Avenue, 3391 Peachtree Road NE (a collaboration with Janice Rago), 173 Boulevard SE (a Forward Warrior project with Rago and Phil Harris) and 1175 Peachtree Walk NE (with Freeman, Stumberg and Vela), among other spots. She’s done inside walls at 3411 Coworking in Chamblee, Fritti restaurant in Inman Park, Microsoft in Alpharetta and MailChimp and NCR Global headquarters in Atlanta, among other projects.