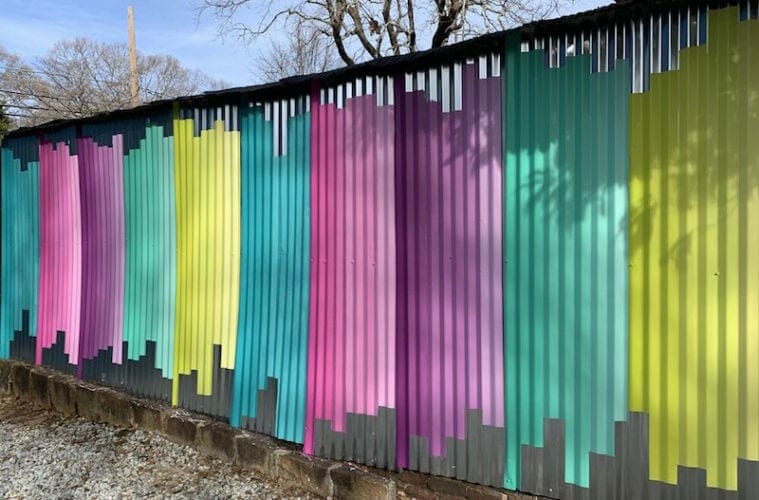 Marge's latest mural was inspired by the texture of the metal wall at 753 Moreland Ave. NE. "I wanted to create a fade of colors that went along with the architecture,” she says. (Photos courtesy of the artist)

Like many DIY creatives, Atlanta-born Marge Radford is more than an artist. She’s a marketer, saleswoman, social-media manager and accountant. She started her own business, Marge Art, last year and has gracefully balanced projects — murals, drawings and wallpapers — while running a company. 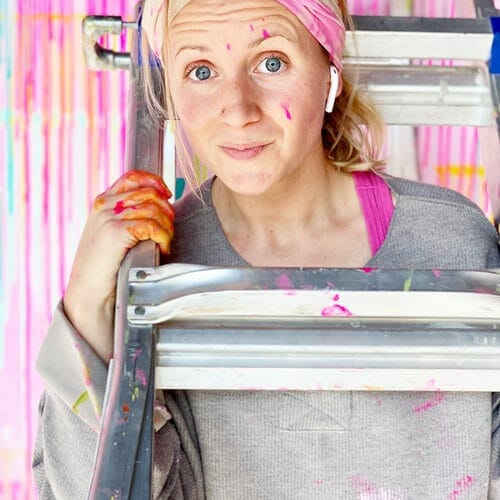 Marge Radford at work. See more  on Instagram at @marge__art.

Finding that rhythm didn’t come easy. Radford gave up a secure job as an interior designer to pursue painting full time. “I was lost as to what to do and where I was going,” she says. “I was a mess last year because I was still discovering more about my style.”

Now, at 27, she understands that her style is as sharp as her line work. She’s used the internet, researching and watching videos on marketing tactics, website creation and how to efficiently run a business on her own terms. Radford says she always felt art was a way to heal, and often found solace in her work.

“I can’t remember exact people or instances that my art stemmed from,” she says, “all I can remember is always being an outcast. Art and doing anything creative made me feel better.”

Her creative spirit shines as she ticks off her bucket list. “I used to sew, play the violin, piano, guitar,” she says. “I’ve always been creative. I’m thinking about getting back into guitar at some point. Maybe take a pottery class, a hip-hop class or get back into singing.”

Radford attended Kennesaw State University in 2011, but found the business and finance world an uncomfortable fit. She began studying interior design at the Atlanta Institute of Art in 2013, taking a fundamentals class that focused on creating detail-driven drawings. “I enjoyed it so much that even outside of class I would make these detailed, geometric drawings,” she says.

After college, she began working for an interior design firm but still held firmly to her passion for drawing. She began to advertise her work on social media and her landlord approached her, asking if she knew an artist who could do a mural in the neighborhood. “I said, ‘Why don’t I give it a shot?’ and that’s how I painted my first geometric-inspired mural.”

Crisp geometric shapes, vivid colors, tight angles and detailed line work dominate. “I genuinely love improving spaces, which stems from my interior-design background,” she says. “I think improving a space is so important because it lifts the vibe.” She paints murals outdoors and indoors. 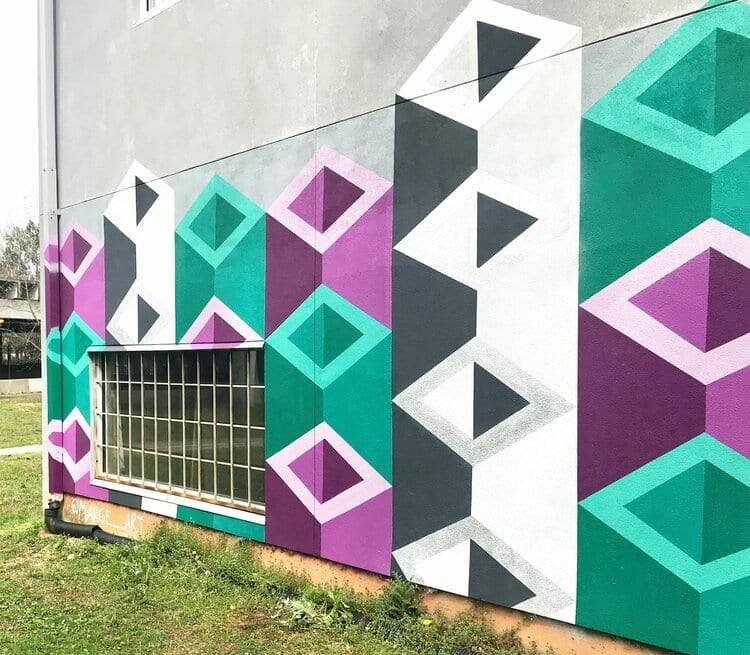 Marge painted this piece along the Freedom Parkway PATH Trail.

“I’m very geometric, so whenever I approach a canvas or wall, I kind of build my design based on the lines and architectural aspects. It’s how I get inspired.” Often her work includes allusions and/or lines that play with perspective. She takes pride in combining her love for interior design and art. She also creates colorful wallpapers that pop.

The mural at 752 Moreland Ave. condos. It was inspired by the metal wall’s texture. It created “a roundish vertical effect, and I wanted to create a fade of colors that went along with the architecture,” she says. 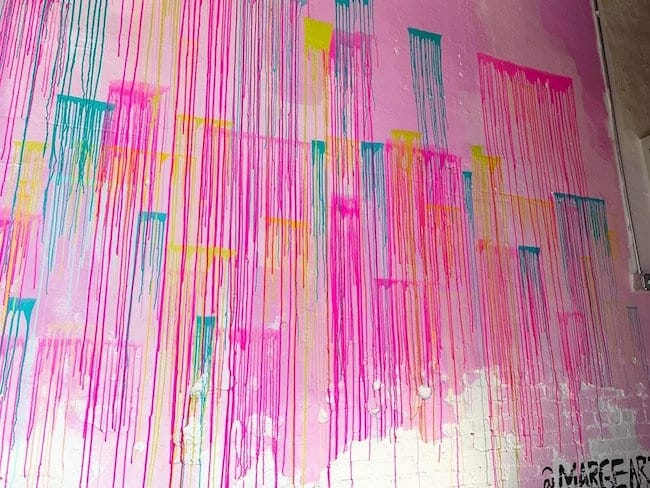 At Hodgepodge Coffeehouse. (See more photos at the end of this column.)

Many businesses want art but don’t know where to look, so Radford says she’s constantly reaching out by email or just stepping inside. She’ll say, “Hey, I was inspired by your wall, and it’s dying for color.” Radford has painted 10 walls and electrical boxes since dipping into street art about a year ago. See more of her work or commission her at margeart.com.

ArtsATL’s street art column appears every other Thursday and is done largely in collaboration with Art Rudick and his Atlanta Street Art Map. We’d love to hear your ideas, too. See something you like? Something we should know about? Have an opinion or suggestion? Please email kathy@artsatl.org. 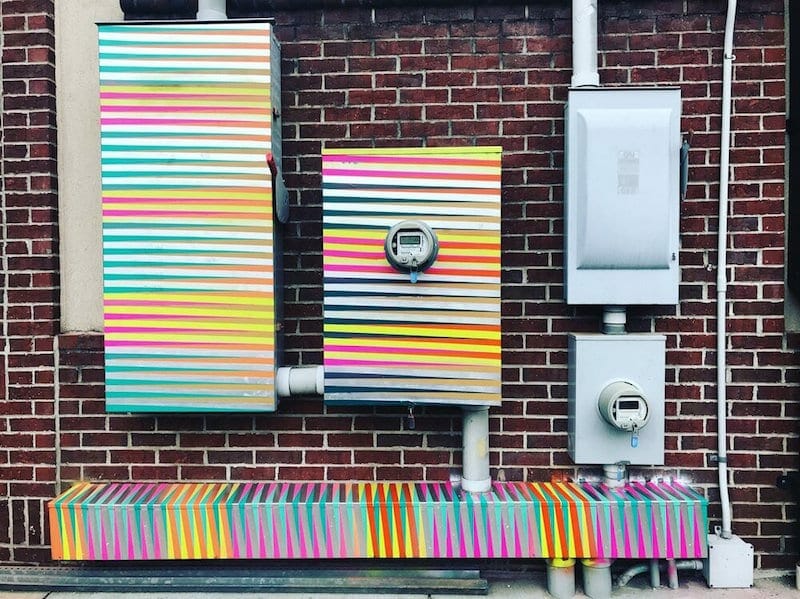 At Pure Taqueria in Inman Park. 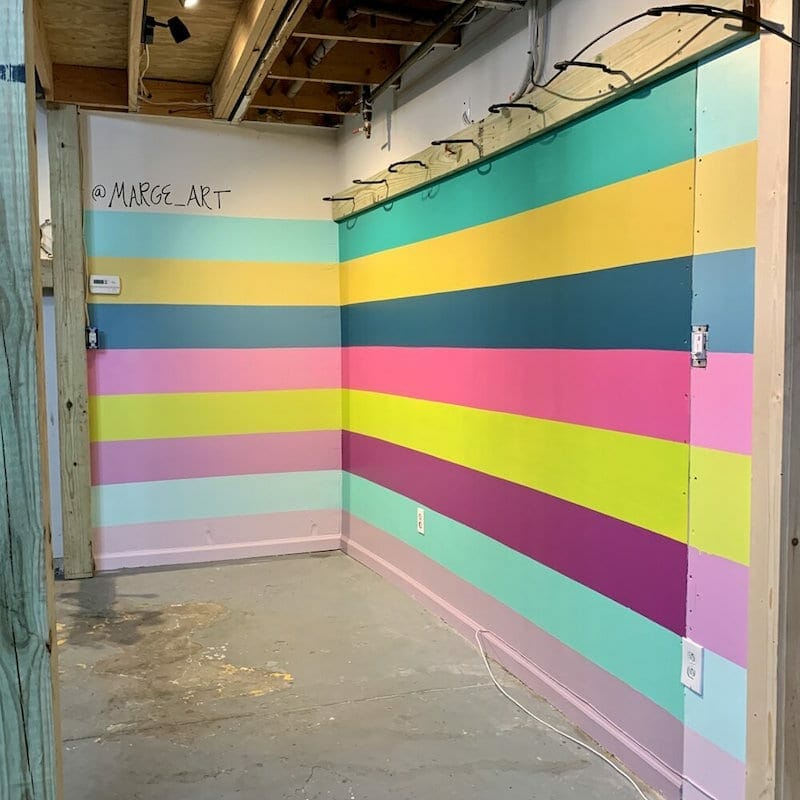 At the Atlanta Bicycle Barn on the Eastside BeltLine near Ladybird Grove and Mess Hall and Krog Street. 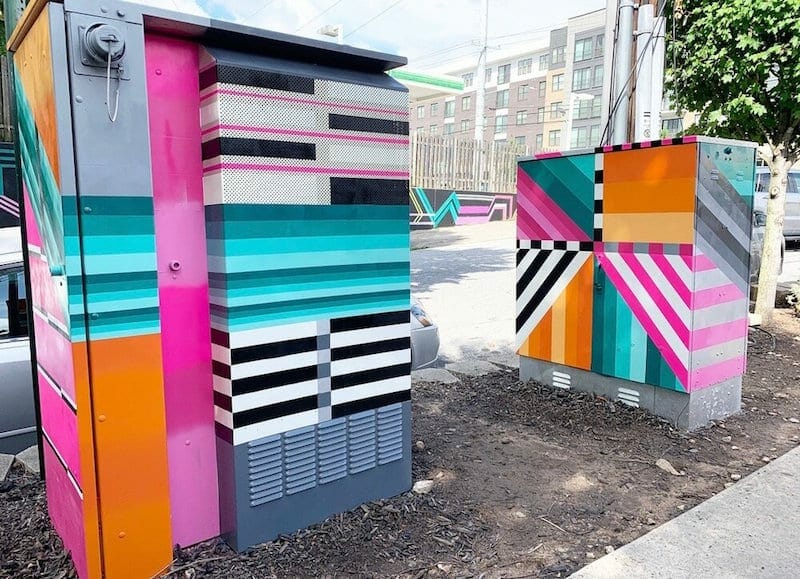 Some of the street art outside one of Atlanta’s Grindhouse Killer Burgers.