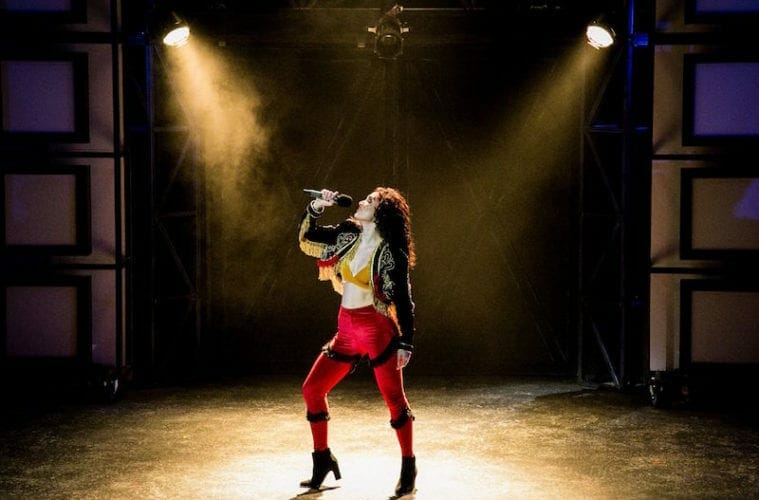 María Bilbao is new to Aurora Theatre but played Gloria Estefan in "On Your Feet!" at Westchester Broadway Theatre last year. The bio-musical runs through April 19. (Photos by Casey Gardner)

Review: “On Your Feet” at Aurora captures the Estefans’ sound but not much else

It’s hard to find a corner that Gloria and Emilio Estefan haven’t touched if you’re driving the streets of Miami. From restaurants and resorts to a new Facebook talk series, the Latin power couple has built an empire that extends far beyond music. It was the rhythm they found in their humble Little Havana beginnings, however, that brought them worldwide fame. The Estefans’ early years and rise to stardom are depicted in the biographical musical On Your Feet! at Aurora Theatre through April 19.

Associate artistic director Justin Anderson directs, with outstanding choreography by sometime-actor Chani Maisonet, and On Your Feet! is an up-tempo ode to American Latin music. The show goes in and out of past and present (the present here is the late 1980s), starting with the modest Miami upbringing of Gloria (María Bilbao) and sister Rebecca (Maya Quiñones).

These dutiful daughters care for their ailing father and tiptoe around their strict mother, also named Gloria (the brilliant Lilliangina Quiñones). At the same time, Emilio (Max J. Cervantes), whose family fled fascism in Cuba, is Rubik’s-Cubing the right mix of musicians with which to build an empire. He and Gloria meet when she auditions to sing with the Miami Latin Boys, with the encouragement of her grandmother (the always delightful Felicia Hernandez). 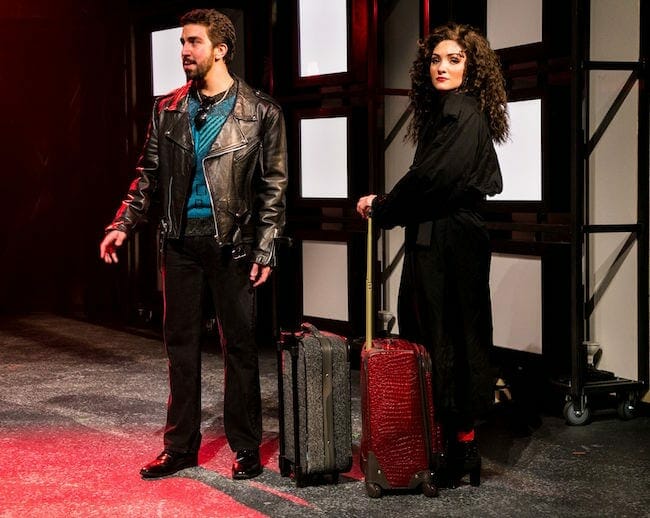 Max J. Cervantes and María Bilbao, as Emilio and Gloria Estefan, chase fame and Billboard history in the song-heavy, plot-light “On Your Feet!”

Gloria nails the audition, or course, and Emilio changes the band’s name to the Miami Sound Machine. As time goes on, multiple doors close in their faces. They sound too Latin. They don’t sound Latin enough. But the club kids have the last word, and the rest is Billboard history.

Bilbao is a newcomer to Aurora stage but played Gloria last year at Westchester Broadway Theatre in suburban New York City. Here, she plays the singer as  subdued, finding a nice balance between sultry and sweet but never quite conveying Gloria’s vocal power. There’s a voice in there, but it doesn’t quite soar. Portraying a living person without mimicking them is difficult, and Bilbao never really finds her sweet spot.

Cervantes must play the less-out-front-yet-still-tenacious Emilio. He struts across the stage, depicting Emilio as both gentle and assertive. His singing ability doesn’t match Bilbao’s and their stage chemistry never heats up, but he’s fully committed to the role.

Credit Anderson and the 27-person cast for making lemonade out of the spoiled lemons that are this flimsy script. There’s nothing about the Estefans revealed in On Your Feet! that can’t be found in a simple Google search. And the writing throughout is uneven, creating several awkward scene transitions. 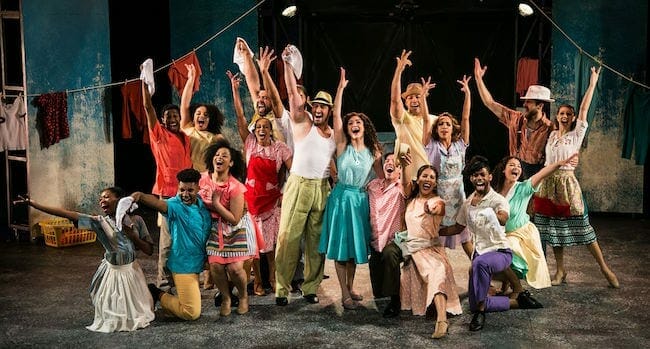 The number “Tradicíon” closes Act 1 authentically with the ensemble waving yellow, pink and green sheets and dancing the salsa and the bachata.

If it’s the music you want, however, it’s all here. Expect to hear dozens of early hits, including “Rhythm Is Gonna Get You,” “Mi Tierra,” “Can’t Stay Away From You,” “Oye Mi Canto,” “Conga” and, of course, “On Your Feet.”

A colorful laundry scene for “Tradicíon” is a first-act showstopper. The yellow, pink and green sheets waving across the stage as the cast dances salsa and bachata is captivating and feels so authentic. Their talents also rise in a flashback scene when Gloria Sr. sings at a club in Cuba. The orange-red lights onstage and Quiñones’ big voice are riveting. Gloria and Emilio Estefan tucked their message advocating for the liberation of all people into dance records, and it’s moments like these that re-emphasize the message that “music cleans the soul.”

Costume designer Alan Yeong perfectly re-creates some of Gloria’s signature looks, capturing the vivacious but laid-back energy of Miami in every garment, from hers to the ensemble’s. Mary Parker’s disco-era-inspired lighting brings a simple set to life.

From “Dr. Beat” to “On Your Feet,” it’s hard not to dance when you hear a Gloria Estefan tune. Though sparse in content, On Your Feet! is a feel-good musical and a reminder of the power that lives inside each of us to make a difference.