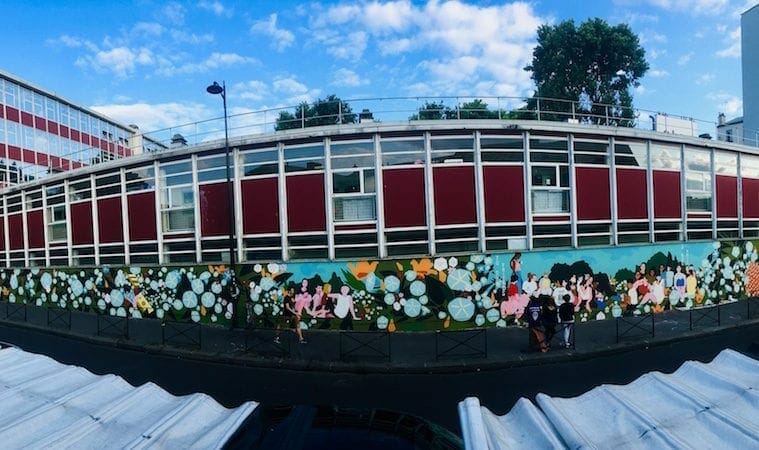 Detail of Dianna Settles' "To Our Friends" mural, found on an 180-foot wall on Paris' Alibert Street, near the right bank of the River Seine. Settles is the first Atlanta artist in Living Walls' new international exchange program. (Photo by Kristen Consuegra)

Today in street art: Living Walls goes from Atlanta to Paris and back again, with paint

The nonprofit Living Walls this year celebrates a decade of creating public art in metro Atlanta through its mission to create intentional, thought-provoking public art that inspires social change and activates public spaces.

The broadening of Living Walls’ scope came after cofounder/executive director Monica Campana and productions director Kristen Consuegra tucked themselves away in the North Georgia mountains to brainstorm. Together they debated what the future of Living Walls should look like. Campana wanted to provide travel opportunities to experience new cultures. “Murals and street art have been predominately represented by male artists,” she says. “I wanted to give opportunities to diverse artists to travel and discover ways of thinking to inspire their work.”

And so, an international artist exchange program was born.

Dianna Settles, 30, is a Vietnamese-American artist who works across multiple disciplines and specializes in printmaking. Her work has been seen at Wish Gallery, Kennesaw State University’s Zuckerman Museum of Art, in last summer’s Of Origins and Belonging: Drawn From Atlanta at the High Museum of Art and more. While visiting Vietnam a few years ago, Settles immersed herself in the artwork of Asian people. 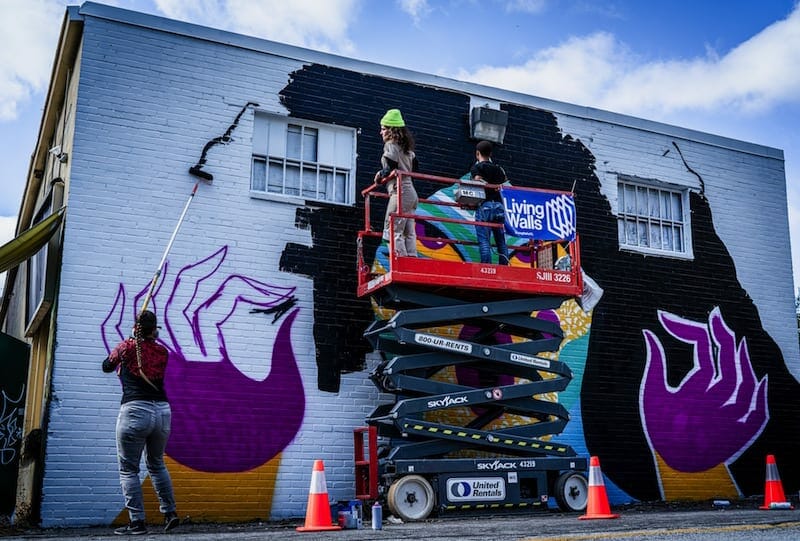 “For the first time I saw art that reflected people who looked like me, and I was inspired,” she says. Settles has grown her style to create images that mirror the world around her. Her artwork often uses images of friends enjoying each other’s company and lounging on a sofa. She regularly uses flowers and plants to encode hidden meanings in her work.

Kashink, 36, is one of the few female street artists who work and live in Paris. She began painting at age 17, at a time when female graffiti artists were unheard of in Europe. Her work combines performance and public art. She paints gender-fluid characters in bold colors with four eyes and has traveled the world to create images that challenge female beauty ideals. She also uses her body as an art medium, never leaving home without a mustache drawn on her face. “My goal is to question the absurdities within social gender codes through my paintings and the way I present myself in the world,” she says.

Settles’ Paris mural is found on Alibert Street in the city’s 10th district along the right bank of the River Seine and near two major train stations. To Our Friends, as it’s called, depicts community and friendship. “There is so much economic disparity, and one thing people at the bottom feel is a lack of space to relax,” Settles says. Her mural features people of diverse backgrounds basking in nature and enjoying each other’s company. 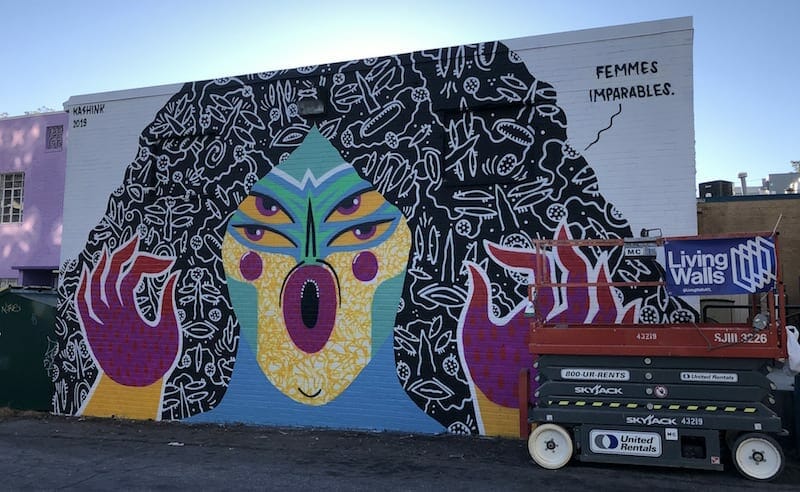 Kashink, a Parisian street artist, began painting at age 17, when female graffiti artists were unheard of in Europe. Even now, at 36, she’s one of the few female street artists who work and live in Paris. Her mural “Femmes Imparables” translates to “Unstoppable Women.” (Photo by Amanda Norris)

Kashink arrived in Atlanta this month to create her Femmes Imparables mural. In English, the title means Unstoppable Women. You’ll find it in Decatur on an outside wall of Twain’s Brewpub & Billiards at 211 E. Trinity Place. It features a character painted in Kashink’s recognizable style, a mask-like face surrounded by flowing black hair. Kashink says her paintings are a form of self-portraiture, but she invites viewers to offer their own perspectives.

Living Walls plans to continue its exchange program and will announce the next artists in a few months. Its next project involves MARTA Artbound and artist Ever (real name: Nicolas Romero Escalada) at the East Lake MARTA station. To keep up with Living Walls, go to its website, follow it on Facebook or follow it via Instagram.

HEY, ARE YOU THERE?

ArtsATL’s street art column appears every other Thursday and is done largely in collaboration with Art Rudick and his Atlanta Street Art Map. We’d love to hear from you too. See something you like that we should know about? Have an opinion or suggestion? Please email kathy@artsatl.org.