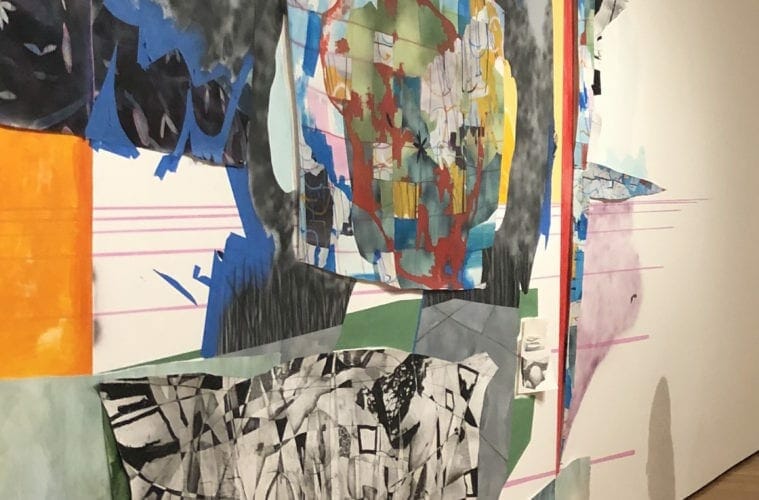 Detail: Wihro Kim's What doze d horizon mean? The 2019 work is acrylic, watercolor, gouache, charcoal and colored pencil on paper and wall. (Photo by Kristen Brown, courtesy of the artist)

And then there were six.

Of Origins and Belonging: Drawn From Atlanta, on view June 1–September 29 at the High Museum of Art, is the third in a series of exhibitions featuring work by Georgia artists. The series began in 2013 with Drawing Inside the Perimeter, featuring 41 Atlanta artists, and continued in 2015 with Sprawl! Drawing Outside the Lines, featuring the work of 76 metro and Georgia artists. All three have been curated by the High’s Michael Rooks.

Origins grows out of the national debate about immigration reform and looks at issues related to place, belonging and heritage. It also considers how foreign-born citizens, residents and their offspring contribute to Atlanta’s population, economy, cultural landscape and arts scene.

The show features work by Jessica Caldas, Yehimi Cambrón, Xie Caomin, Wihro Kim, Dianna Settles and Cosmo Whyte. Caomin and Whyte immigrated to the United States as adults, and Cambrón is a DACA (Deferred Action for Childhood Arrivals) recipient. Although they’ve moved past the emerging artist stage, all are on the younger side. Here’s a closer look at each.

The award-winning activist and multidisciplinary artist paints, draws, makes prints and does installations and sculptures largely around the themes of women’s relationships and experiences. Her work connects personal and community narratives to larger themes and social issues. She was born in Jacksonville, Florida, in 1986, and recently received her M.F.A. in painting, drawing and printmaking at Georgia State University. She has shown work at galleries and through public art programs in Atlanta, nationally and internationally. Multidisciplinary artist and activist Jessica Caldas (Courtesy of the museum)

Cambrón was born in San Antonio Villalongín, Mexico, in 1992. She moved to Atlanta with her family just before her eighth birthday and is a graduate of Cross Keys High School in DeKalb County, where she teaches today. She has a B.A. in studio art from Agnes Scott College and is known for giving voice to the concerns of immigrants and for the public murals she paints as commissions and in collaboration with the local nonprofits Living Walls and WonderRoot. Artist, activist and educator Yehimi Cambrón (Courtesy of the museum)

The work of the native New Yorker-turned-Atlantan consists primarily of paintings of dreamlike spaces that play with perception and memory. Kim, who was born in 1991, received his B.F.A. from Georgia State University in 2015 and has exhibited work ever since — locally with Hathaway Contemporary, Mammal Gallery, Mason Fine Art and MINT Gallery, among others. Wihro Kim paints dreamlike spaces that play with perception and memory. (Courtesy of the museum)

The Vietnamese American artist, musician and gallerist is primarily a painter and printmaker. She depicts everyday settings intended to counter fetishized and passive images of women of color. She was born in Los Alamitos, California, in 1989 but grew up in rural North Georgia. A trip to Vietnam helped her develop the brightly colored Asian figures often seen in her work. She runs Hi-Lo Press and Gallery, a print studio and gallery for up-and-coming artists in Midtown. She earned a B.F.A. from the San Francisco Art Institute in 2014. Painter and printmaker Dianna Settles depicts everyday settings intended to counter fetishized and passive images of women of color. (Courtesy of the museum)

The multidisciplinary artist and educator was born in St. Andrew, Jamaica, in 1992, and was 19 in 2001 when he moved to the United States. He is a visual arts professor and program director at Morehouse College and has a B.F.A. from Bennington College in Vermont and an M.F.A. from the University of Michigan. He has exhibited in the United States, Jamaica, Norway, France and South Africa. Among other honors, he won the Forward Arts Foundation Emerging Artist Award in 2010. He’s participated in the Atlanta Biennial (2016) and the Jamaica Biennial (2017). Jamaica-born Cosmo Whyte uses his art to look at migration and the legacy of colonialism. (Courtesy of the museum)

The painter, sculptor and digital media artist was born in Shanghai in 1974 and has been living and working in the United States since 1999. Caomin grew up under the strict Chinese Communist regime and comes from the first generation of artists there to address contemporary topics and themes. He teaches studio art at Clayton State University. Xie Caomin comes from the first generation of Chinese artists to address their nation’s contemporary topics and themes.