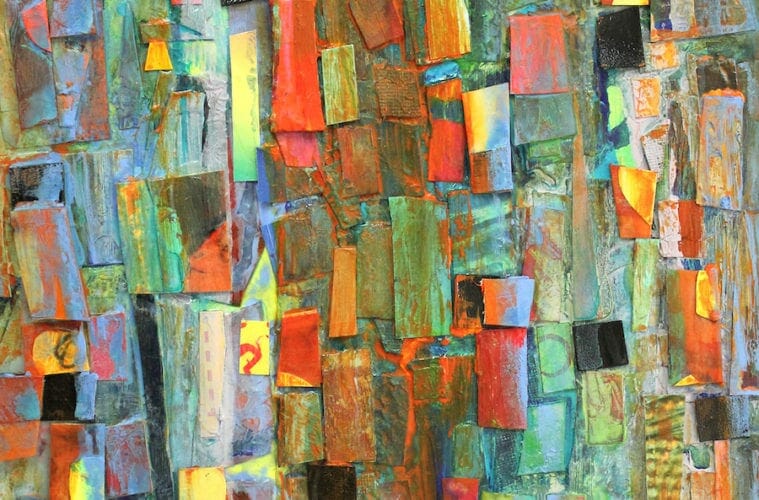 Detail of Atlanta artist Deanna Sirlin's "The Distance Between." The monumental collage can be seen at the Icon Buckhead luxury apartments on Peachtree Road. (Photo by Arushi Mittal)

The Distance Between, a monumental new collage by Atlanta artist Deanna Sirlin — seen outside the Icon Buckhead apartments — was four years in the making, perhaps even longer. 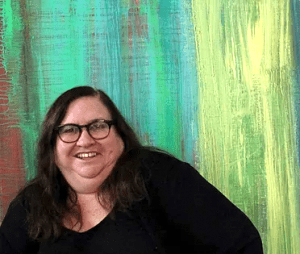 “This is my life. I love it,” says artist Deanna Sirlin.

An Icon investor was in Venice a few years back, eating at a restaurant called the Oliva Nera. Its owner, Isabella Zambon, collects Sirlin’s work. The two met 20 years ago when Sirlin, who’s known for her gestural paintings and monumental installations, attended the Venice Biennale and installed a large transparent glass piece in an auxiliary exhibition at Cá Foscari University of Venice. Sirlin, Zambon and Zambon’s husband, Dino Coro, became fast friends.

After seeing Sirlin’s work in Venice, the investor looked at her website and called, saying, “I want you on my building.”

“That,” Sirlin says, “is the life of a public artist.”

The Distance Between measures 30 x 50 feet, but it started life as an 8.5-inch x 11-inch painting on vellum. Using digital photography, Sirlin was able to take the original much, much larger. It’s a massive collection of bright blues, greens, reds, oranges and yellows. The entire piece is framed and illuminated at night by LEDs. 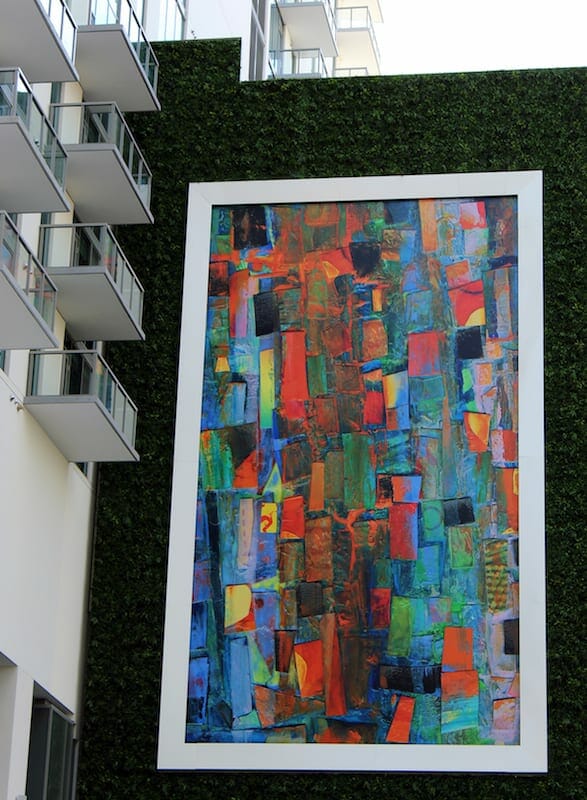 “The Distance Between” lives on the Stratford Street side of the Icon Buckhead luxury apartments on Peachtree Road. It measures 30 feet x 50 feet. (Photo by Arushi Mittal)

The four-year gestation of The Distance Between came as Icon Buckhead architects, developers and owners tried to zero in on what they wanted Sirlin to create. “Believe me, it’s a process,” she says with a laugh. “But this is what I do. This is my life. I love it.”

The Icon Buckhead apartments are at 3372 Peachtree Road NE. The Distance Between is on the Stratford Street side of the building, atop a breezeway used by residents to enter and exit the parking garage. The piece is surrounded by greenery. “They wanted this to be an entrance that people felt really good about,” Sirlin says. “Atlanta is a driving city, let’s face it.”

The title, The Distance Between, comes from the distance between colors and spaces and buildings and people, Sirlin says.

Sirlin, an ArtsATL contributor, has an M.F.A. in painting from Queens College of the City University of New York and a B.A. from SUNY-Albany. Her work has been seen in more than 85 solo and group shows worldwide since 1982, including London, Venice, China and Germany. In Atlanta, her work has been seen everywhere from the Alpharetta Arts Center to the High Museum of Art, from Whitespace and Fay Gold Gallery to Elevate Atlanta and Flux Projects. She moved to Atlanta in 1987 and, in February, became artist-in-residence at the Alpharetta Arts Center, where she has her studio.

Variation (seen February–April at the Alpharetta Arts Center) featured 16 new pieces ranging from mixed-media collages on vellum that incorporated traditional art materials, to pieces of her work alongside elements of recycled and found objects, a site-specific large-scale window installation and paintings on canvas. 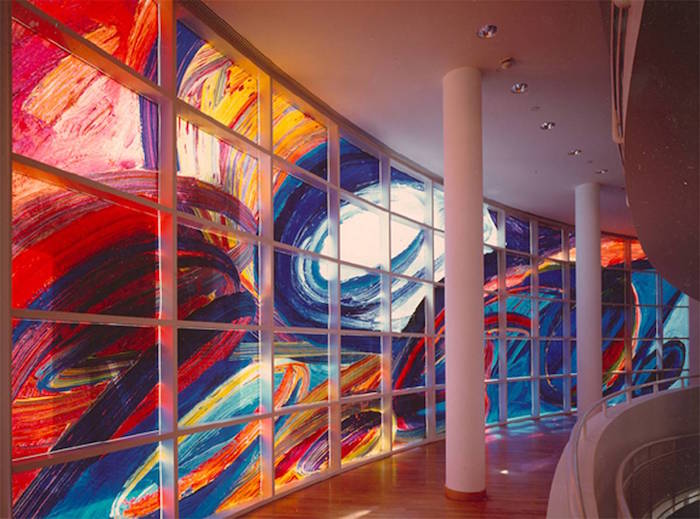 “Retracings,” Deanna Sirlin’s 1999 and 2005 installation, could be seen from inside and outside the High Museum of Art.

Retracings (a 1999 installation reinstalled in 2005 at the High Museum) used the latest in photographic and digital technology to turn the High into a monument to light and color. Three Sirlin paintings were digitally scanned into a computer, enlarged to 50 times their original size and printed by laser onto transparent film. The resulting transparent images, numbering almost 170, were mounted on façade windows, creating a stained-glass effect. By day, light filtered through the transparencies, dappling the white interior with color. By night, the High’s interior lights made the museum glow.

Sirlin is working on a major exhibition that will go up in Portugal in April 2020.  It will feature 20 large-scale window pieces that will surround an art center in the city of Évora (population: 57,000).

ArtsATL’s street art column appears every other Thursday and is largely done in collaboration with Art Rudick and his Atlanta Street Art Map. We’d love to hear from you too. See something we should know about? Have an opinion? Please email kathy@artsatl.org.