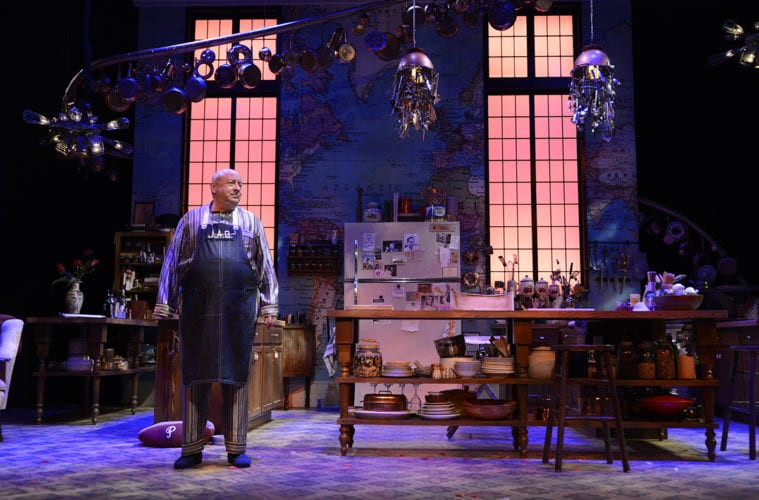 William S. Murphey stars in I Love To Eat at Theatrical Outfit. (Photo by Greg Mooney)

Theatrical Outfit announced its 2019–20 season on opening night of its latest production, I Love To Eat, about the life of beloved chef James Beard. Patrons gathered in the house of Atlanta’s second oldest theater just before curtain with celebratory champagne. The staff stood in front of the hyperrealistic kitchen set and read vignettes about each show before announcing the name. This marks the final season under the leadership of artistic director Tom Key, who says that he wants this season to reflect the swath of American life.

“In my lifetime, I’ve never known our country and the world more challenged about what is our greatest calling, which is [answering the question]: Are we going to evolve from tribalism to a global community?” Key says. “One of the most powerful tools we have been given to do that is the theater art form. I question whether America would be America if it were not for the theater. It’s the only occasion where we gather together and language is center stage — and it’s the riskiest thing we do because violence begins in language and love and compassion begins in language.”

The season starts with two iconic plays performed in repertoire, Our Town by Thornton Wilder and The Laramie Project by Moisés Kauffman and The Tectonic Theater Project, featuring the same cast of 10 actors performing in both productions. The season continues with four new plays by women: the world premiere of Safety Net by Atlanta playwright Daryl Lisa Fazio; the next installment of Lauren Gunderson and Margot Melcon’s Jane Austen plays, The Wickhams: Christmas at Pemberley; a new comedy by Wendy MacLeod, Slow Food; and the Broadway smash Indecent by Pulitzer Prize-winning playwright Paula Vogel. Closing the season will be the beloved musical that launched Tom Key into the hearts of so many, Cotton Patch Gospel by Tom Key and Russell Treyz, with music and lyrics by Harry Chapin, and starring Key.

“Whether it’s dramatic, comedic, based on fact or fantasy, we’re covering it all this season,” Key adds. “Starting this season with Our Town and The Laramie Project in repertory is a great acorn of what the oak of the season is going to be. . . . It’s a conversation that we’re starting that’s going to spill over into the public discourse when we need it now more than ever. That’s what I feel about this season — now more than ever.” The 2018 production of Miss Bennet: Christmas at Pemberley at Theatrical Outfit (Photo by Casey Gardner)

The season will also feature the return of Theatrical Outfit’s Unexpected Play Festival and the popular jazz concert series from renowned trumpeter and vocalist Joe Gransden. With seven productions, a concert series, a new play festival, summer camps and weekend classes for young people, there is something for everyone at Theatrical Outfit. More details about the season are below.

Our Town
By Thornton Wilder
Directed by David Crowe

Considered by many to be the the greatest American play ever, Our Town depicts the town of Grover’s Corners in three acts: “Daily Life,” “Love and Marriage” and “Death and Eternity.” Narrated by a stage manager character and performed with minimal props and sets, this classic chronicles the Webb and Gibbs families as their children fall in love, marry and eventually — in one of the most famous scenes in theater — die.

In 1998, a university student named Matthew Shepard was kidnapped, beaten and tied to a prairie fence outside Laramie, Wyoming. When he died days later, the world learned Shepard was targeted because he was gay. A breathtaking collage of the local residents, The Laramie Project is virtuously determined to find the light in an event of harrowing darkness and exposes the depths to which humanity can sink and the heights of compassion of which we are capable.

Chris Dove is the first-ever female fire captain in an Alabama town at war with opioids, and she’s facing it head-on, heart out and under scrutiny. Meanwhile, her spitfire of a mother, Xenia, tries to conjure stability with bundt cake and Bible verses. When Chris’ mysterious childhood friend, Val, drifts into their lives, daughter and mother find themselves at a tipping point between what’s safe and what saves.

Welcome back to Regency-era romance with The Wickhams: Christmas at Pemberley, a companion to Theatrical Outfit’s Pride and Prejudice-inspired Miss Bennet (produced by Theatrical Outfit in 2017 and 2018). While the Miss Bennet plot unfolds upstairs, Pemberley’s servants navigate their own scandal down below, as a diligent housekeeper, an indomitable maid and a lovesick groomsman struggle to control the boorish Mr. Wickham. Gunderson and Melcon’s latest love letter to Jane Austen celebrates family and forgiveness at the time of year we need both of them the most.

Irene and Peter just want a quiet anniversary meal while on vacation in Palm Springs, but the evening heats up when a neurotic waiter won’t bring their food, and everything goes deliriously wrong. This fussy server has the couple second-guessing their menu choices, parenting skills and their very future together. Will their shared desperation get them their spanakopita or end a marriage? Everything (and nothing) is on the table in this zesty comedy about painfully slow service.

Inspired by the 1923 Broadway debut of The God of Vengeance by Jewish writer Sholem Asch, Indecent tells the story of a kiss between two female actors (one playing a prostitute, one a brothel owner’s daughter) that led to an entire cast being arrested for obscenity. With vivid theatricality underscored by a live Klezmer musical ensemble, seven actors portray over 40 roles in this fascinating exploration of faith, sexuality and art.

The beloved musical returns home just when we need its radical hope — now more than ever. Inspired by Clarence Jordan’s provocative The Cotton Patch Version of Matthew and John and produced and cherished worldwide since its conception in 1981, this soul-rouser with boundless heart sets the story of Jesus in the American South. In downtown Atlanta in 2020, Cotton Patch Gospel promises to raise the roof with joy!