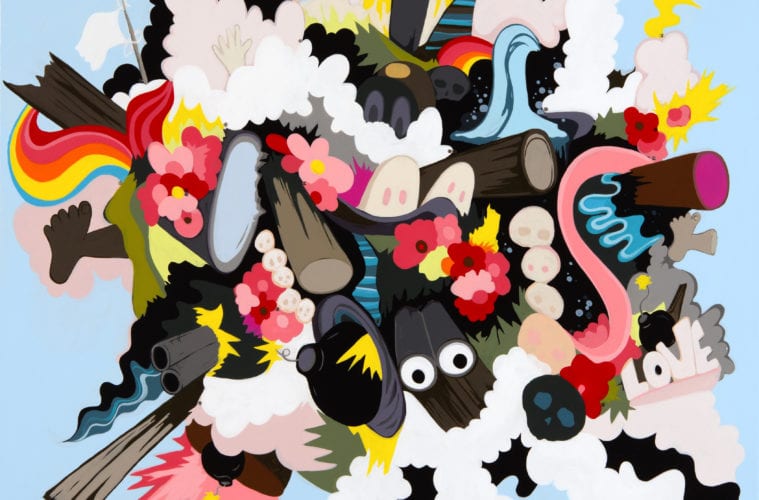 Going Steady With Disaster is part of O Smithereens!, work by Sarah Emerson at Whitespace. (Courtesy of the gallery and the artist)

Sarah Emerson’s O Smithereens!, at Whitespace through May 4, explores the fragility of life and early pleasures and builds on her 2018 series Are We the Monsters, seen at Zuckerman Museum of Art in Kennesaw.

The paintings and drawings feature familiar stylized landscapes imploding into darkness and devouring all inhabitants, and feel more feminine. Shades of soft pink and animated drawings of the female body are pronounced, likely a nod to the upswing in national attention to women’s rights. “A constant consideration,” Sarah Emerson says, “is not allowing myself to plan too much that I miss something interesting. I try to allow room for the unexpected.” (Photo by TW Meyer)

Emerson, a graduate of the Atlanta College of Art and London’s Goldsmiths College, spoke with ARTS ATL about developing her style, finding her voice and the dialogue within her work.

ARTS ATL: You began painting at age 19 and have developed a recognizable style. Can you please talk about this?

Sarah Emerson: Upon entering art school, I studied photojournalism. I was very much inspired by my circle of friends that were heavily involved in the punk scene. They made zines, were politically outspoken, and I was influenced by their creativity. It didn’t feel as natural to me to express myself in those ways. I felt that I fit the role of an observer. While studying painting, not only did I learn that I could explore ideas on canvas, but I actually enjoyed it.

There is a constant thread in my painting to visually balance sweetness and softness, but what usually happens is more aggressive and chaotic. I endeavor to reconcile the beautiful experiences of life with the scary. There is a layer of opposing ideas in the work that I deliver in a more animated way.

As I assemble and dissemble landscapes, recurring subjects creep their way onto the canvas, sometimes intentionally. The challenge has been staying away from irony. I want to provide enough context for the viewer to consider the environment alongside me. A lot of that comes from me internalizing my reaction to the outside world and figuring out what my roles and responsibilities are.

ARTS ATL: Are your conceptual ideas solidified from the start, or do they become more defined as you progress?

Emerson: Much of my work happens organically, but nothing really substitutes for getting the basic structure on canvas and then responding as I go. I keep foundation design principles in mind while I’m completely fine with obliterating those rules. I start with specific landscape compositions and build upon them. I make decisions as I go and add things like the feet or eyes. I don’t always understand right away why certain elements go together, but those elements will work their way in. A constant consideration is not allowing myself to plan too much that I miss something interesting. I try to allow room for the unexpected. Emerson: Throughout years of landscape painting, I have played with representational abstraction. I recently read a book on physics and specifically black holes. I was enamored with an image of landscapes balling up and exploding into a million pieces while still trying to keep themselves together. The work is a process of disassembling and trying to reassemble a physical and cultural landscape. I’ve created a universe where representations of both good and bad are equally cannibalized.

Looking back, I can see the series was a direct response to current conversations in American psychology. I wasn’t consciously injecting a message of panic or tension, but those feelings were present in the studio. I wanted the paintings to have a more feminine appearance. The title of the show is from a popular phrase, “I’ll blow you to smithereens” from the cartoon character Yosemite Sam. The visual of the female body splintered and swept up in this explosion felt like an opportunity to portray the disembodiment of women.

ARTS ATL: Is your work political?

Emerson: I would say that my work is political. There are concerns in life that we as citizens all have, and I feel comfortable making art that asks questions. I’m not looking to stir controversy. However, I can’t ignore blatant issues that surround me. We live among people who have vastly differing viewpoints, but I believe human dignity and human rights are important nonpartisan issues. The intention of my work is to engage the viewer to consider the issues with me. ARTS ATL: Can you imagine a time when your work would drift from that topic or elements of it?

Emerson: The work has always been about maintaining a sense of hope within a reality that adversity exists. It’s understanding the basic meaning of life, that Earth was created for life to exist while also remembering that it’s finite. External elements evolve and change over time, but our relationship to existence doesn’t.

While in London, I was critiqued by a professor who examined my portfolio and advised me that my work was too “in the present.” I think about that all of the time. My roots in art came from photojournalism and considering  the world around me. I sometimes wonder if I’m commenting too much on what’s happening now. Then I remember the quote from [singer, civil rights activist] Nina Simone, who said, “An artist’s duty is to reflect the times.” I’ve realized that I’m much more interested in her way of thinking.