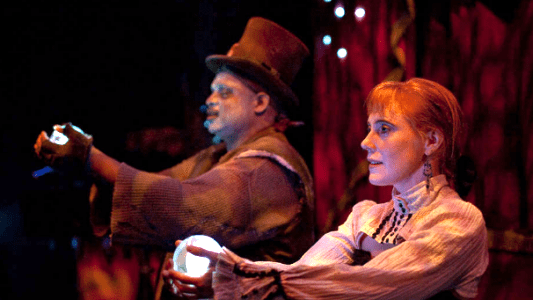 The Center for Puppetry exhumes its popular The Ghastly Dreadfuls for one night only this weekend. This edition of the Halloween favorite is subtitled Ex-ZOOM’d From the Tomb. The event includes screenings of rare scenes, tales of true behind-the-scenes terror, jokes that will scare the yell out of you and cocktails/mocktails with Lady Dreadful. Be there or beware. 7:30 p.m. Saturday (October 31). $10. Tickets HERE.

The solo show Stiff, written and performed by Sherry Jo Ward, ends its virtual run with Synchronicity Theatre on Sunday (November 1). The comic drama deals with Ward’s diagnosis of Stiff Person syndrome, a rare degenerative disease that slowly inhibits her mobility. ArtsATL reviewer Alexis Hauk called it “a poignant, hilarious, autobiographical tour de force.” Stiff was easily the best of Synchronicity’s 4×4 series of solo shows by women. You’ll feel as if you’ve really been to the theater. Viewable via Vimeo.