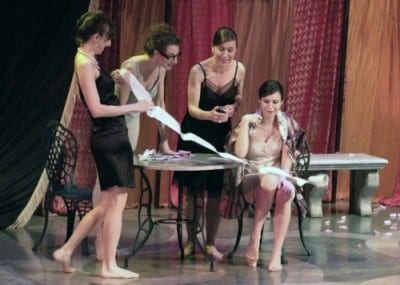 Unfortunately, the comedy falls short of his characteristic verbal felicity and assured plot development, although his insight into human psychology remains intact. Rarely staged, this early play will be performed by Georgia Shakespeare in repertory through August 8, along with “Shrew: The Musical” and, opening July 8, “King Lear.”

Georgia Shakespeare deserves credit for a valiant attempt to create a coherent performance from the play, with its confusing, implausible plot, unappealing main characters and wooden language. The cast labors mightily, yet it’s the audience that’s frequently lost. The production averts disaster with a cluster of comically antic moments and a closing dramatic flourish. Directed by Janice Akers, the action is updated with modern costumes and embellishments like one character’s use of text messaging to send a sonnet to his love. (Top: Courtney Patterson as Maria, Carolyn Cook as the Princess, Park Krausen as Rosaline and Caitlin McWethy as Katherine. Photos by Bill DeLoach.)

The show receives a boost of energy from intern Tucker Weinmann, a native Atlantan and Elon University theater student. As the Puck-like Moth, Weinmann performs with impressive physical agility and comic excitement. His work rises above the rest of the production, especially his fine closing performance of the most well-known elements of the play, the frequently anthologized Cuckoo’s (spring) and Owl’s (winter) songs.

With the acoustic guitar accompaniment of Joe Knezevich, who energetically plays the clown Costard as a modern-day young slacker, Weinmann achingly explores the songs’ emotional depths. Shakespeare’s lyrics — with music by Atlanta composer Kendall Simpson — eloquently sum up the play’s themes of love’s vagaries and the primacy of simplicity and honest emotion over artifice and intellectual pretension.

Unhappily, most of the preceding play falls short of that brilliance. Written while Shakespeare was producing his sonnets, in the mid-1590s, “Love’s Labour’s Lost” is full of presumably witty wordplay, lampoons of contemporary intellectuals (such as Sir Walter Raleigh and George Chapman), and rhetorical monologues on love and learning. With flashes of Shakespeare’s brilliance, the dialogue shows that he had not yet discovered how to convincingly dramatize his language, although he would shortly write “Romeo and Juliet” and “A Midsummer Night’s Dream.”

The convoluted and incongruous plot and absence of familiar passages make the action difficult for the audience to follow. The cast makes an admirable, if not entirely successful, effort to make the plot twists and changing identities intelligible. The basics of the story slowly take shape: four young men in the kingdom of Navarre decide to renounce female companionship, along with sleep and food, to study intellectual pursuits. The arrival of four young women from France causes the men to quickly renounce their vows, and they make fools of themselves seeking the women’s favors. At the end, their efforts fail and love’s labour is indeed lost — an unsatisfactory resolution that Shakespeare attempts to paper over with the addition of the two songs.

Brad Sherrill as Biron and Park Krausen as Rosaline, the two central characters, don’t achieve the volatile chemistry the roles require. The cynical, coldly intellectual Biron finds Rosaline a mirror image of himself, and falls hard. In turn, she tortures him with cruel duplicity. Sherrill and Krausen’s barbed interchanges lack emotional fire, all too often eliciting winces rather than laughter.

Biron is given the bulk of the play’s major speeches, but Sherrill doesn’t generate sufficient stage charisma to carry them, although the soliloquies admittedly possess little of the grandeur of Shakespeare’s later famous passages. As the emotionally remote, manipulative Rosaline, a one-dimentional character defined more by malice than delight, Krausen struggles to find the right pitch, resulting in a perfunctory performance.

Partnered with Weinmann as Moth, Tim McDonough animates the production with a hammy rendering of the Spaniard, Armado, defining him as an endearing Don Quixote who achieves a hard-won dignity while falling for the young maiden Jaquenetta, winningly played by Ann Marie Gideon. His heartache over losing Jaquenetta gives the performance its closing resonance.