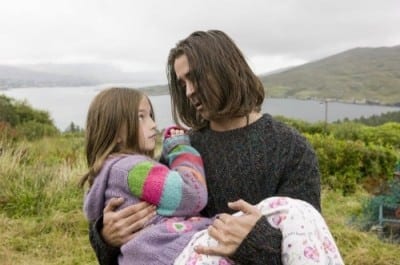 Review: Neil Jordan’s latest, “Ondine,” where supermodels are fished from the sea

Writer and director Neil Jordan has always been an exciting film fabulist. Consider: the Siggy-Freud-meets-Grimm-Bros. kinkiness of “The Company of Wolves” (1984). Or his lushly florid adaptation of Anne Rice’s Goth/gay reverie “Interview With the Vampire” (1994). Or the elaborate fantasies of boy psycho Frankie in “The Butcher Boy” (1997), featuring Sinead O’Connor as a foul-mouthed Virgin Mary.

Jordan’s most famous film, “The Crying Game” (1992), manages a Shakespearean, cross-gender twist that seems impossible to pull off under the ruthless scrutiny of a film camera. But the movie pulls it off. Other Jordan titles (“Mona Lisa,” “The Miracle,” “The End of the Affair” and even that fascinatingly awful Jodie-Foster-is-a-vigilante flick “The Brave One”) all have a flavor of the otherworldly to them.

So you would think that “Ondine,” a direct attempt to fuse old-timey fable with the here and now, would be a cinch for Jordan. Colin Farrell stars as Irish fisherman Syracuse, called by the locals “Circus” because of his former wildness as a drunk. Sober now, he plies the cold Celtic Sea alone in his boat. On land, in his picturesque County Cork village, he wheels his young daughter Annie (Alison Barry) to dialysis sessions; she has failing kidneys.

Syracuse’s ex, Maura (Dervla Kirwan), is still a heavy drinker, living with a lout named Alex (Tony Curran), who seems to show slightly too much affection for young Annie. So it’s no wonder the girl has her eyes open for a bit of magic to enter her life.

Actually, it comes to her father first, when Syracuse one day hauls up his fishing net and finds in it a gorgeous Polish supermodel. OK, actually she’s a mystery woman who calls herself Ondine, speaks with an elusive foreign accent, and is played by Polish beauty Alicja Bachleda. (The actress last year gave birth to Farrell’s son, so it’s safe to say the two hit it off during the film shoot.)

Syracuse’s rule for staying sober seems to be to avoid questions of any real significance. Bypassed topics include Who the hell are you? Where did you come from? How did you end up in my net? What sort of accent is that? And who is that foreign-looking, drug-dealer type of stranger who just showed up in the village and seems to be searching for something — or someone? Instead, Syracuse just puts Ondine up in his cabin near the waterside.

Young Annie, however, deals with the mystery by deciding that Ondine is a selkie, a seal-like sea dweller that can shed its skin and live on land, should she fall in love with a human. In fact, Annie becomes so convinced of this notion that she seems to be slightly demented. (It doesn’t help that Barry is, unfortunately, an un-nuanced and sometimes grating young actress.)

Perhaps if Jordan, as the screenwriter, had himself been a little more nuanced about the mythical element in “Ondine,” the movie would have flowed better. Instead, this feels like the work of a younger filmmaker clumsily trying to make “a Neil Jordan film.” There’s no real sense of urgency here, and the plotting feels by-the-numbers.

Jordan will no doubt make a great movie again; this is just a modest misfire. Meanwhile, if you’re interested in films that deal more successfully with the selkie-mermaid mythos, try these: “The Secret of Roan Inish” (1994), John Sayles’ lovely tale of an Irish girl who learns that her family has a powerful connection to the ocean, and “Local Hero” (1983), Bill Forsyth’s funny-melancholy story of the colorful residents of a Scottish seaside village, one of whom seems to be suspiciously comfortable in the water.