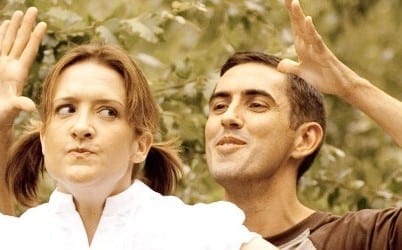 Grief is a shaky foundation for a relationship. And yet the impulse is wholly natural. We lose a child or sibling prematurely, and our lack of clarity is such that we can’t help but transfer those messy emotions onto the next available newborn. This is the human heart trying to repair itself, tie a new knot, heal the wound.

“John & Jen” — the Andrew Lippa-Tom Greenwald musical and second production of Serenbe Playhouse’s inaugural season — is the story of a woman who loses her brother in Vietnam, then tries to re-create him in the likeness of her son. In a smart conceit, the two-person, chamber-size piece requires the same performer to play the brother and son (both called John), a decision that emphasizes the mirroring aspect of the story and requires the actor to repeat himself without appearing to repeat himself.

Brian Clowdus, who plays John and John, knows a thing or three about wearing more than one hat. Working on his master’s in theater at the University of South Carolina, the Amherst College honor grad got it into his head that the bucolic Chattahoochee Hills community of Serenbe (32 miles south of downtown Atlanta) needed its own theater company. So he started one — creating a board, raising money and enlisting his South Carolina classmates as designers, carpenters, musicians and directors.

The result is a festival-like experience, where children can see a morning production of “The Jungle Book,” staged beside a treehouse deep in the woods, and adults can sip cocktails while watching a contemporary play in the town courtyard. If the work weren’t so good, it would be tempting to dismiss this ambitious endeavor as a stroke of youthful naiveté, as ephemeral, perhaps, as the theater’s mascot: a firefly.

But the Alabama-born Clowdus says he wants to put down roots, so let’s hope his project flourishes like the organic tomatoes and green beans that are now in season on the community’s sustainable farms. Such humble beginnings have born fruit before: 25 years ago, Georgia Shakespeare started in a tent on the grounds of Oglethorpe University; today it’s a top-notch classical theater company. Wouldn’t it be nice if Atlanta had its own nearby version of Spoleto, which started in an idyllic Umbrian village in Italy, or Jacob’s Pillow, which began as a dance retreat in the Berkshires?

Only time can reveal the future. For now, we have “John & Jen,” terrifically performed by Clowdus and Atlanta actress Christy Baggett and supported by an excellent three-piece band directed by William Shuler (who also performs in “The Jungle Book” and the upcoming “Shakespeare’s R&J”). Kimi Maeda’s set — a series of wooden piers built around Serenbe’s courtyard fountain — provides a simple, uncluttered stage with several playing areas, while April J. Brown’s costumes are light and lineny. Andrew Carson’s scrapbook-style video designs are a little obvious, but they reflect the idea of projecting one’s ego onto another.

A sort of “Next to Normal” lite, “John & Jen” (with music by Lippa, lyrics by Greenwald and book by Lippa and Greenwald) doesn’t so much dig deeply into the heavy-freighted psychological issues it exposes as dance around them. Following in the footsteps of a father who has probably abused him, John marches off to Vietnam, while hippie-chick Jen and her boyfriend flee to Canada. John and Jen’s troubling goodbye will come to haunt the elder sibling, who evolves into a smothering mother who has trouble letting go.

As director, Clowdus imparts a physical vocabulary that plays up John’s youthful pluck and Jen’s cloistered personality. A natural ham, he uses his boyish charm, expressiveness and energy to delightful comic effect. Baggett — a lovely actress who seems to have been overlooked by intown directors, or at least rarely given a starring role — wears a more introspective mien. Jen’s birthday gift to her dead brother (“Just Like You”) and 11th-hour epiphany (“That Was My Way”) are heartbreaking.

“John & Jen” is too predictable to be a perfect piece of literature. But it’s a beautiful musical treatment of delayed grief and the indelible imprint of blood ties, which can neither be washed clean nor wished away. And it’s a strong choice, artistically and financially, for Serenbe Playhouse. The show compares favorably to work by Atlanta’s well established intown theaters (Actor’s Express being an obvious comparison). The only difference is that it’s performed al fresco, so that the sky and the clouds become part of the drama.