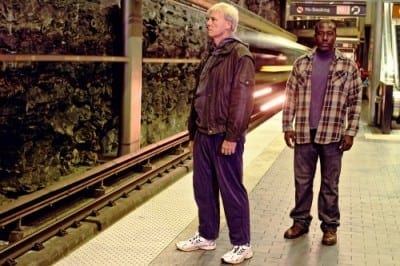 Cormac McCarthy’s play “The Sunset Limited” is subtitled “A Novel in Dramatic Form,” which means what, exactly? It doesn’t really mean anything, but it serves as a big flashing beacon that we are entering the Realm of Pretentious Twaddle.

This “novel,” which is in “dramatic form,” opened at Chicago’s Steppenwolf Theatre in 2006 and is now at Atlanta’s Theatrical Outfit through April 11. It’s about two men, a white man named White and a black man named Black. I detect some symbolism there. White is a professor, filled with sadness and despair, who has just tried to commit suicide by jumping in front of a commuter train named the Sunset Limited. Black is a Christian who intervened and saved White, and brought him back to his little run-down apartment underneath the train tracks. White checked out of his own life years ago and can see nothing but the beckoning abyss; as he himself says, the question isn’t why he tried to kill himself today, the question really is why he waited so long. Black, a much more vibrant character, tries to use his faith and humanity to penetrate White’s walls. (Photos by Chris Bartelski.)

On the one hand, there’s a lot of talk about the meaning of life, and faith, and death. On the other, “Limited” doesn’t end up amounting to much more than a decent guy pestering the hell out of a stubborn guy for more than an hour and a half. There is no action, at best a dab of momentum and no resolution to speak of. Two characters talking can be amazing (from “Waiting for Godot” to “My Dinner With Andre”), but as McCarthy proves, they can also be very trying. No fault goes to the actors: E. Roger Mitchell as Black and Peter Thomasson as White give it everything, and make portions of the material lively and engaging. Nor the director, Jessica Phelps West. The fault is entirely with the play; if it didn’t have McCarthy’s name attached — if it was, say, Beans Baxter’s “The Sunset Limited” — it’s hard to imagine it being staged based on what’s on the page. I salute Theatrical Outfit for their philosophy — “stories that stir the soul” — and willingness to take risks, but this is one excruciating evening.