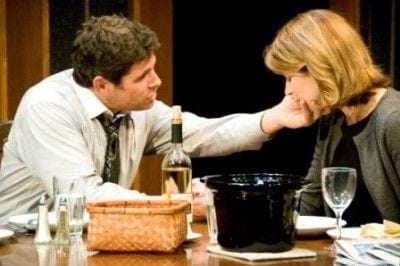 Can you think of a more difficult play to pull off than the two-character drama? Everything rides on how the actors are able to work off each other while trying to bring the ultimate truth of the script onto the stage. Now add the challenge of working with a new script, and the challenge doubles — even if the actors are free of the baggage of the noteworthy productions of better-known material.

These are just a few of the reasons to go see “Albatross,” Actor’s Express’ world premiere of Atlanta playwright Lee Nowell’s first solo effort, running through November 20. Deftly directed by artistic director Freddie Ashley, “Albatross” follows a married couple through a harrowing evening that follows the funeral of a friend, and the series of secrets and lies that come spilling out over food and drink, suspicions and accusations. 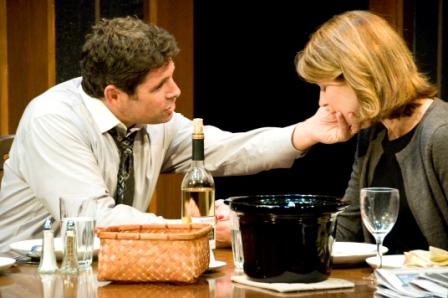 The contrast between the two spouses’ reactions to the funeral could not be starker, initially — tentative Alice (Lane Carlock) frets her way back into and through their urban apartment, busying herself with dinner so her emotions don’t bubble to the surface. Then there’s the seemingly clueless and insensitive Jim (Brian Kurlander), who prattles on about what a loser the late Vera was, so good riddance, and if there’s any good that can come out of her death, he’ll take it. (Photos by Offhand Photography.)

Here’s where it gets weird: Alice’s sensitivity is as misleading as Jim’s insensitivity. She’s as defensive as Jim is offensive, so to speak, and the success with which “Albatross” rides these stances evolves over the course of this two-act drama. Nowell seems fascinated by notions of sin and redemption as much as she does truth and mendacity, and how all of them shape our identity. Which leads to loaded lines like, “I guess some things never wash off, no matter how many times you try,” “It’s like you’ve been one step ahead of me our whole marriage,” and “People are rarely as simple as they seem.” 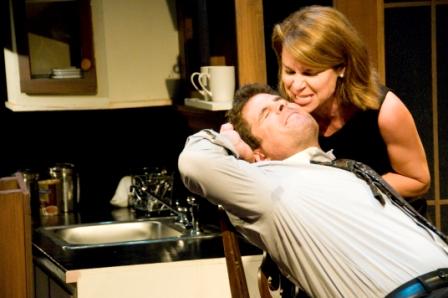 Both characters start coughing up confessions about their connection to Vera and how it relates to their relationship, and as the evening wears on, the audience alternates between relishing the swordsmanship at play and wondering where this is all going.

To divulge anything more would be a disservice to what Nowell as playwright intends to be a clever and witty mystery, so maybe now’s a good time for some confessions of my own. I’ve never before seen the leads, so watching Carlock and Kurlander working together was half the fun. As I mentioned, two-character plays present a monster task for the actors, who have nowhere to hide onstage and expend a kind of marathon-like energy. Nowell doubles the challenge with a character arc that has to be believable from start to finish, and then there’s the crucial need to believe that this really is a couple — chemistry is almost everything.

Carlock and Kurlander have it, even if they aren’t able to maintain their energy level completely throughout. (I’m betting this will improve over time.) Carlock’s transformation from mouse to near femme fatale has a delicious sexuality to it, and Kurlander’s move from oaf to rebel gives him an edge that everyone welcomes. I’d also confess that I’ve never seen any of Nowell’s acting work or her writing collaborations with her husband, Phillip DePoy, but “Albatross” seems a great place to start.

“Albatross” might not keep its rhythm all the way through, and the ending — which apparently underwent several reworkings before settling on the current one — feels a bit facile and not nearly as clever as Nowell would have us believe. But it’s a worthy solo debut, and it stands in stark contrast to another local debut of a domestic drama, the well intentioned but tedious “Conversations With My Wife” over at Theatre in the Square. 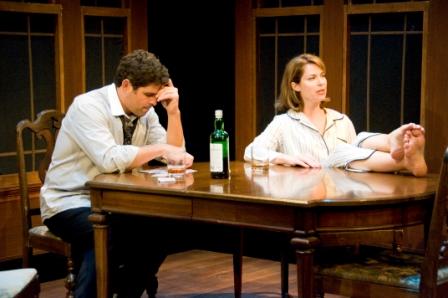 Better comparisons can be found in more familiar works. In an interview with Creative Loafing’s Curt Holman, Nowell said the play’s roots are in certain scenes in “Annie Hall.” At first I wondered whether “Albatross” would have the same excruciating yet delicious dark comedy as Edward Albee’s “Who’s Afraid of Virginia Woolf?,” which set the gold standard for couples as cat and mouse. But more and more I was reminded of Neil LaBute’s post-9/11 work “The Mercy Seat,” in which another couple ponders the possibilities and opportunities presented by loss and faces that particularly American strain of self-centeredness.

Nowell takes her title from the fabled albatross in “The Rime of the Ancient Mariner,” here referring to the way our past can hang around our necks like a curse. After watching Nowell’s work, as interpreted by these two actors, it’s good to know that there’s likely a bright future for all involved.