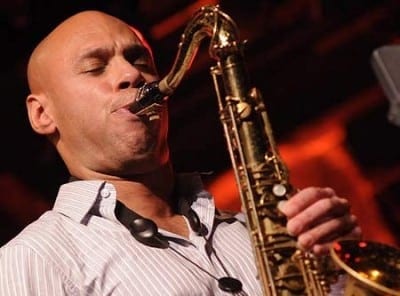 Review: Sax master Joshua Redman and trio, rocking out from bebop to Coldplay

“Four in One” by Thelonious Monk is a caffeinated piano roll, a sprightly seesaw melody of leaps and runs that sounds as progressive today as it did when Monk first recorded it in the early 1950s. On Saturday at Spivey Hall, tenor saxophonist Joshua Redman flew through the chart at a blistering tempo as part of an utterly captivating trio concert. It was one of only a few standards the Redman band played, but they stacked the set list with accessible material; the audience reacted to each of the originals as if they had been in the canon for decades. 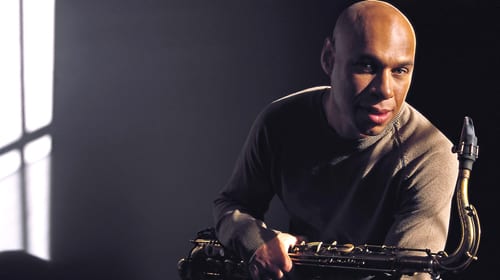 Redman (above) brought with him a fluid bassist, Reuben Rogers, and Gregory Hutchinson, a talented and vibrant drummer. These three-member ensembles have been part of Redman’s touring and recording life for several years, a reflection of the current resurgence of saxophone trios. He has released two albums in various small-group settings. “Back East,” from 2007, is a trio album featuring guest spots from his late father, saxophonist Dewey Redman, and tenor Joe Lovano; last year’s “Compass” beefs up the saxophone trio with an additional drummer and bassist.

This current lineup is a modern band in all senses of the word, performing free-flowing music that is based in swing and bebop but is built on an enhanced harmonic lexicon. During the show, neither Redman nor his bandmates were confined to a single style. Their version of Led Zeppelin’s “The Ocean,” performed with rollicking abandon, stayed in my mind well after the show ended (the band encored with a Coldplay song). Redman’s authoritative tenor and Hutchinson’s all-out rock drumming transformed the group into an arena band while still grounding the music in jazz.

Reed musicians are almost always more fascinating on their primary instrument, but I might prefer Redman on soprano sax, which he brought out on “Ghost,” among other tunes. He takes the fickle instrument — more difficult to play and to keep in tune than the tenor — and creates a full, bright tone. On Saturday he showed complete control of the soprano, playing everything from bubbly, double-time passages to smooth, meditative phrases.

The musicians pulled out dramatic instrumental performances during the evening, but none of their technical tricks was used simply to amaze the crowd. Redman was constantly in motion while playing — a modified crane stance here, a manic heel bounce there — and this physical aspect allowed the audience to see how hard he was working. Veins bulged in his neck as he stretched out his last bits of breath at the end of phrases or ascended into the upper reaches of his horn. Hutchinson was unerringly attuned to each song’s overarching shape, whether building a cacophonous jumble on “Insomnomaniac” or gently tapping out rim-shot syncopations as encouragement during a bass solo. As for Rogers, this was the first time in quite a while that I’ve seen an audience follow bass solo after bass solo with such rapt attention. That’s high praise indeed.

Spivey Hall’s programming routinely features national musicians at the top of their craft, and Saturday’s event was a bar-setting beginning for an Atlanta jazz season that also will include tenor saxophonists Branford Marsalis, Joe Lovano and Ravi Coltrane. If these tenors (and their sidemen) put on even half the show that Redman’s trio did, Atlantan jazz fans will be in for quite a survey of the modern saxophone this year.