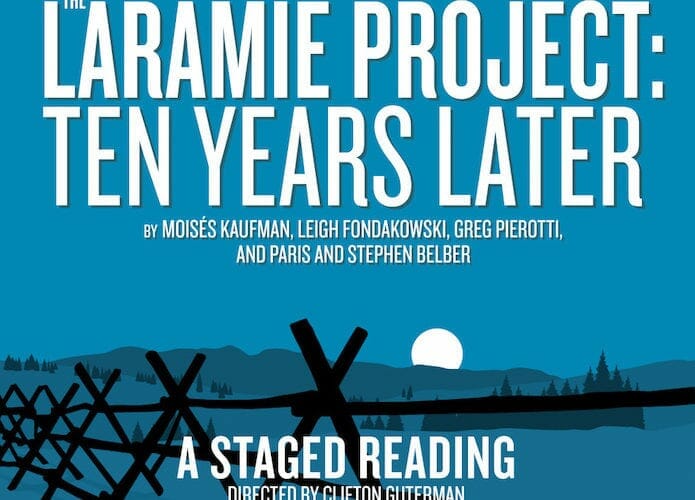 Theatrical Outfit’s impressive Our Town /The Laramie Project repertory closes Sunday, but a final treat remains. At 7 p.m. Monday, many of the same actors will do a staged reading of the sequel, The Laramie Project: Ten Years Later. Clifton Guterman again directs. As of this writing, tickets ($25) remain for the reading, a benefit for Georgia Equality. The rep is well worth your time as well. Tickets remain for Our Town at 7:30 tonight (September 26) and Sunday; tickets for The Laramie Project remain for 7:30 p.m. Friday–Saturday.

True Colors Theatre Company wraps up playwright Dominique Morisseau’s Detroit Trilogy with Paradise Blue, a bluesy mystery that should be as sexy as it is melodic. It’s set in 1949, against a backdrop of gentrification and displacement. The cast boasts the considerable talents of Cynthia D. Barker and Enoch Armando King, among others. Through October 20. Southwest Arts Center.

Longtime Atlanta actors Terry Burrell and Megan McFarland are the cast of The Roommate, a dark comedy by playwright Jen Silverman at Aurora Theatre. It at first seems to be an edgy, odd-couple comedy, writes ArtsATL contributor Linda Sherbert in her review, but grows into an exploration of personal transformation and emotional intimacy. In Lawrenceville. Through October 20.