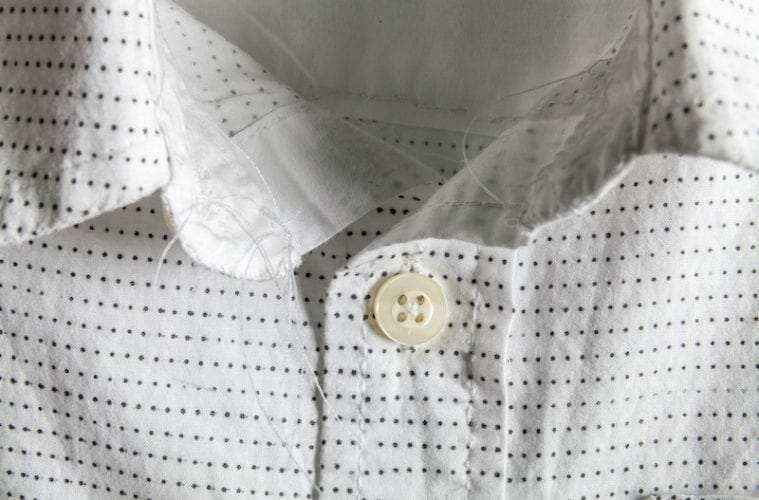 In 1942, Albert Camus published The Myth of Sisyphus. Against the backdrop of World War II, the Algerian philosopher presents suicide as the foremost philosophical question. Camus reads new meaning in the ancient Greek myth of a seditious king’s punishment in the underworld. The gods condemned Sisyphus to push a boulder up a hill, but as it reaches the apex, it rolls down and he starts again. It’s an endless and nonsensical cycle of perpetual toil. Yet, Camus posits that Sisyphus might find purpose — and even satisfaction — in the absurd task. It thus becomes, for Camus, a fruitful labor.

Camus’ notion is the impetus for Fruitful Labors at Kennesaw State University’s Zuckerman Museum of Art (through November 10). It’s a thoughtful and open-ended meditation on “strategies for coping,” as described by curator Kirstie Tepper. Tepper leans heavily on video and installation, bringing together seven regional and nationally acclaimed artists.

Fruitful Labors opens with British American artist Lenka Clayton’s Hand-Typed Shirts (2015–19). She takes apart factory-made garments, prints patterns onto the fabric using a typewriter and then reassembles them. Tiny dots and dashes cover the surfaces of the two shirts here. Clayton disassociates the symbols — periods, colons and slashes — from their communicative functions. 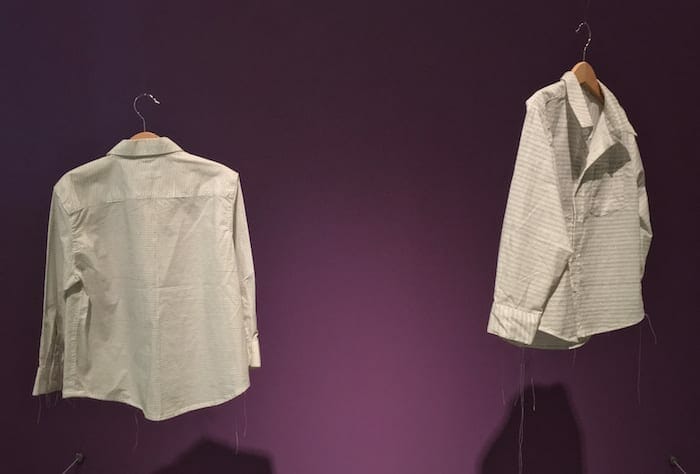 The “Hand-Typed Shirts” by Lenka Clayton hang at torso-height against a purple wall at the Zuckerman, evoking a spectral human body.

They lose their conventional meaning, becoming abstract, stitchlike marks that coalesce in a larger surface pattern. This effort draws attention to small, repetitive acts of making, perhaps highlighting the unseen labor required to make our clothing and other necessities. Hanging at torso-height against a purple wall, the shirts evoke a spectral human body. It’s a subtle but significant suggestion of loss that is reiterated throughout the exhibition.

The 2016 photographic series not her(e) by Los Angeles-based Kaitlynn Redell echoes the absence suggested by Hand-Typed Shirts. Redell’s five photos show a caretaker and child in domestic environments, though a slipcover-like fabric covers the adult’s body. In not her(e) (couch), for example, a woman holds a baby though only her feet are visible. The image suggests the presence of a maternal body and an invisibility.

Redell’s series suggests the cycle of daily child-rearing tasks marked by a constant negotiation of self-sacrifice, shifting notions of identity and unconditional love. Such repetition, of course, conjures Sisyphus’ perpetual labor and the happiness Camus imagines he finds. 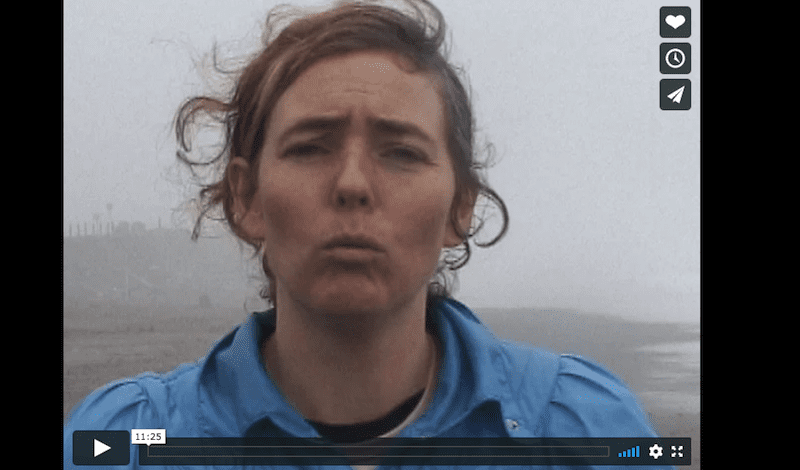 The theme of child-rearing continues in Stanya Kahn’s film Kathy (2009). Screened in a small gallery, viewers can sit in a soft, beige love seat to see the nearly hour-long film. Given its content, the plebeian chair is a clever nod to domesticity that disrupts the gallery’s typical formality.

Kathy shows the artist’s close friend talking candidly about the C-section birth of her child, her role as a therapist and her troubled (though hilarious) relationship with her mother. It’s a funny, authentic and extraordinarily watchable examination of the tragic and the familiar.

I See You Man (2008) by Kahn and video artist Harry Dodge loops on a large gallery wall. The 11-minute film shows Kahn talking extemporaneously along a misty Pacific shoreline. It’s edited in a jolting fashion so that the conversation seems one-sided and rambling (though, as installed in Fruitful Labors, the voices of Kathy and Kahn often overlap, creating an accidental, cacophonic exchange). Like Kathy, it’s compelling and captivating, though Kahn’s performance is more enigmatic than Kathy’s straightforward monologues.

Shana Moulton’s eccentric The Galactic Pot Healer (2010) merges the mundane and the mystical. Moulton’s title references a 1969 novel by Philip K. Dick. To be sure, Moulton, who was born in California but lives in New York, crafts a familiar but strange world akin to science fiction, and David Lynch’s Twin Peaks is an oft-cited inspiration.

Moulton’s loose narrative features her alter ego, Cynthia, interacting with her peculiar home. When Cynthia breaks an ordinary green pot, she seeks the help of the Galactic Pot Healer, a faceless entity in a pink snuggie. After being told the pot is beyond repair, Cynthia receives a message from the Galactic Pot Healer, who forms a vessel out of Cynthia’s back, in the process restoring the original green vessel. The strange story suggests the process of healing. Further, it conjures the value attached to objects and to ritual, themes prominent in work by Atlantans Michelle Laxalt and Shanequa Gay. 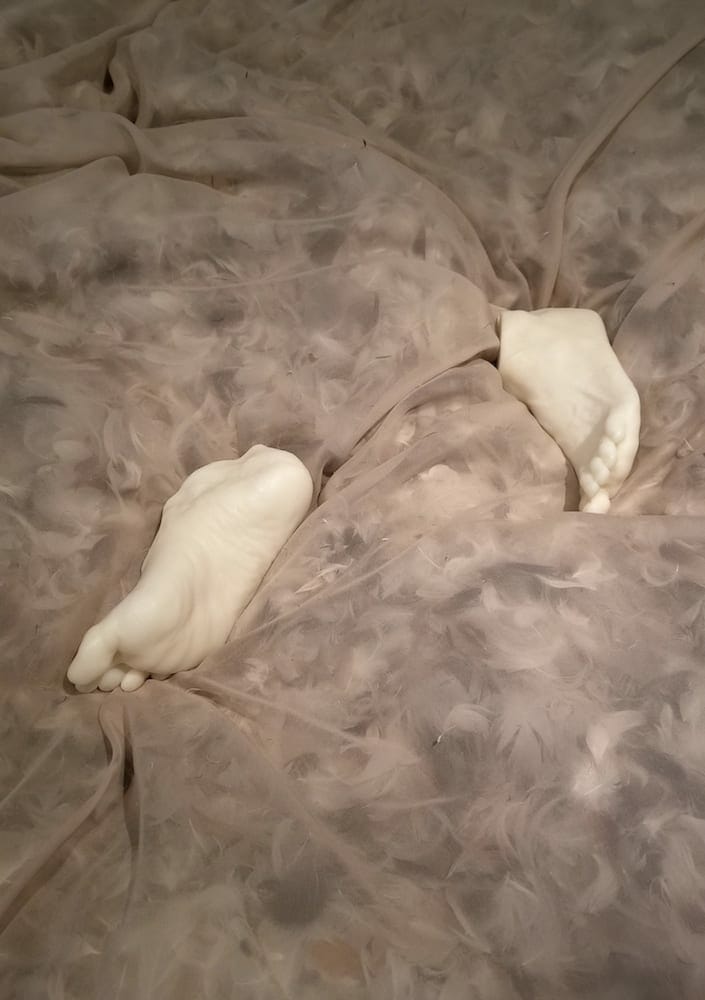 Detail: Atlanta artist Michelle Laxalt’s “the quivs II,” made of soap, silk and down feathers

Laxalt’s two sculptures possess corporeal qualities. A branch hangs from the ceiling in shed/nest II (2019). Below, a pile of hair and feathers evokes fallen leaves as to elegiacally suggest decay and the passing of time.

In the equally mournful the quivs II (2019), translucent silk encases down feathers in a low, pillowy sculpture. A pair of cast-soap feet rest in the arrangement, suggesting an absent body at rest. It draws from personal experience: the artist’s grandmother’s belief in the home remedy of placing bar soap in or near the bed to alleviate nighttime leg spasms.

Self-transformation lies at the heart of Gay’s mural the unnameable, unspeakable divine ascension (2019) and photographs metanoia (2018) and delos (2018), both from the devouts series. Situated so that it’s the last work viewers see, it functions as a forward-looking conclusion.

Gay’s “devouts” metanoia and delos are invented goddesses. She describes them as powerful, earthbound deities who have ameliorative powers. Gay’s site-specific the unnameable, unspeakable divine ascension surrounds metanoia and delos. The multifigural composition climbs the walls in stark black and white — perhaps depicting a mass of women, perhaps a single figure in fluid, dancelike movements. 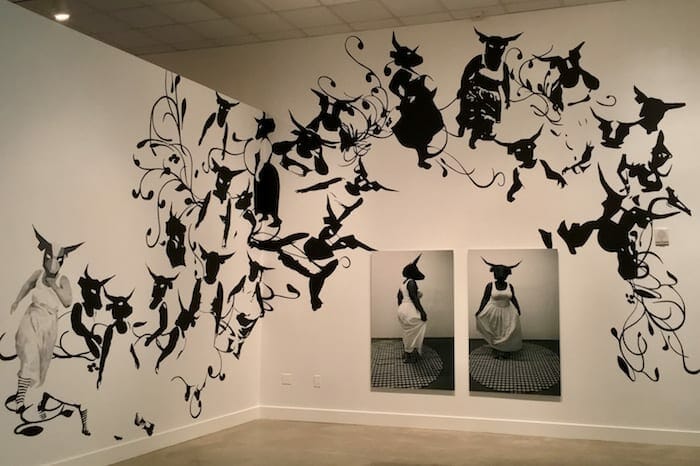 It’s a critical appropriation of academic French painter William Bouguereau’s Les Oréades (1902), which shows a tangled mass of classical nymphs rising into the sky as three satyrs (our stand-ins as viewers) watch. Bouguereau’s apotheosis shows figures ascending skyward, but Gay’s women bend back toward the earth as their forms disintegrate into curving lines and plantlike patterns. Further, Bouguereau’s painting eroticizes young, white women under the guise of classicism, while Gay’s work centers on black women whose costumes and acts suggest self-creation through new rituals. Ultimately, Gay’s arching composition is the most literally Sisyphean in Fruitful Labors, even though the mythology is her own.

Like Sisyphus’ great rock, a weight looms heavy over Fruitful Labors. The exhibition is, in part, a tribute to former Zuckerman director Justin Rabideau, who died a year ago. The show eschews direct depictions of mortality and grief. It offers no conclusions. Instead, it wisely suggests myriad ways of grappling with profound issues through art. Camus imagined Sisyphus experiencing happiness as he once again reached the top of the hill and watched the boulder’s inevitable descent. Fruitful Labors, likewise, offers hope via moments of strength and resilience.