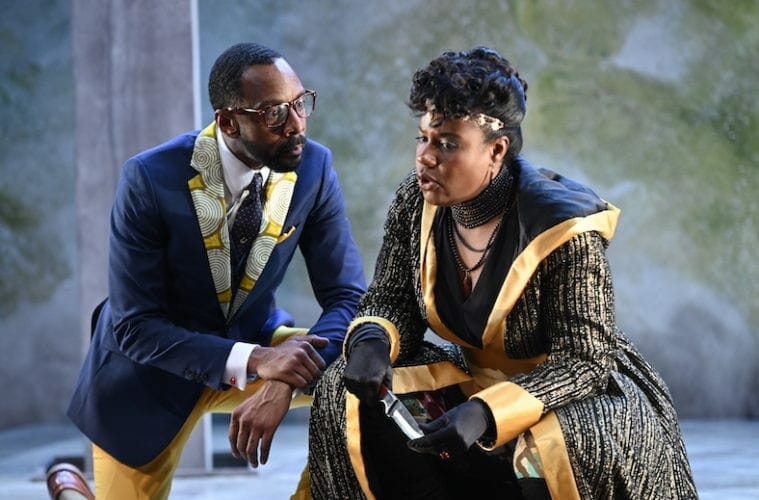 Wigasi Brant (left) and Tangela Large face off in the Alliance Theatre's "Seize the King," a script by Will Power based on Shakespeare's "Richard III." It's the first Classic Remix Project script. (Photo by Greg Mooney)

The Alliance Theatre grows its stable of new-playwriting initiatives with its staging of Seize the King (through Sunday on the Hertz Stage). The Classic Remix Project, as it’s called, will commission leading American playwrights to create new works that revitalize, rethink and respond to classic literary works found in most high school curriculum, according to an Alliance press release. The resulting plays will ideally invite students and adults to engage in ways that feel relevant and contemporary. Look for Kimberly Belflower’s “John Proctor Is the Villain” next season.

Playwright Will Power’s Seize the King is a reinterpretation of Shakespeare’s Richard III with hip-hop beats and street language. John Proctor Is the Villain by Kimberly Belflower — inspired by Arthur Miller’s The Crucible — was previously commissioned for a rolling world premiere in 2020—21.

The Classic Remix Project joins the 15-year-old Alliance/Kendeda National Graduate Playwriting Competition for college students in M.F.A. programs and the Reiser Atlanta Artists Lab, open to any Atlanta-based artist from any discipline looking to develop a project that would benefit under the Alliance’s umbrella. Actor-playwright Mary Lynn Owen’s Knead, staged as part of the 2018–19 season, was developed in the Reiser Lab.

Classic Remix Project commissions in the pipeline for upcoming seasons include:

Walden by KJ Sanchez. Inspired by the Henry David Thoreau book Walden and essay Civil Disobedience. Sanchez is an associate professor of playwriting and directing at the University of Texas at Austin.

A Tale of Two Cities by Brendan Pelsue, a modern look at income disparity inspired by the Dickens novel.

Working Title Playwrights’ 2020 Ethel Woolson Lab, its competitive workshop series, begins at 7:30 p.m. March 22 with Monster Girls at Sunshine Donuts by Dani Herd. The lab continues with staged readings in May, September and November. The lab is named for a longtime Working Title benefactor.

The lab began in 2009 and this year grows from three to four productions by Atlanta playwrights who are WTP members. Each recipient gets a 29-hour developmental workshop culminating in a rehearsed, staged public reading. Each playwright partners with a team of artists (director, dramaturg). All readings are free and take place at the Alliance Theatre’s third-floor black box. Seating is limited.

Herd’s Monster Girls follows a werewolf, a vampire and a Frankenstein monster who work at a doughnut shop and get more than they bargained for when they host an after-hours party there. “It really sucks how much your past can come back to bite you,” the Working Title press release says. Rebekah Suellau directs, with dramaturgy by Sofia Palmero. Herd, a playwright and theater artist, often has been seen onstage at the Shakespeare Tavern Playhouse.

The other lab artists and their projects:

Faith by Lee Osorio. 7:30 p.m. May 17. After the death of her mother, Faith spirals into a pattern of compulsive eating and driving until an arrival breaks the pattern. The stranger gives her hope that her future holds more than working in the Ingle’s deli department. Osorio is an actor, director, teacher, playwright and the associate artistic director at Out of Hand Theater. In addition to film, TV, and off-Broadway and New York theater credits, he’s been seen onstage in Atlanta at Actor’s Express, the Alliance Theatre, Aurora Theatre, Serenbe Playhouse, the Shakespeare Tavern Playhouse and Theatrical Outfit. Cynthia D. Barker directs, with Angela Farr Schiller as dramaturg.

Maybe Politics Are Over by Sloka Krishnan. 7:30 p.m. September 6. Maybe Politics, said to move at the speed of a 24-hour news cycle with music and movement, renders catharsis at its most confrontational, according to a Working Title press release. In a world too much like our own, four politicians jockey for power and grapple with desire, three women fight for change they can’t envision and three outcasts retreat to the woods to find peace. Krishnan is described as a playwright-lyricist interested in magic, extravagance, ritual, camp, and the disavowal of moral purity and coherent identity. His play The Grand Transexual Draweth Nigh recently received an Artist Project Grant from the City of Atlanta Mayor’s Office of Cultural Affairs and will be produced at The Bakery Atlanta this spring and have a staged reading March 25 at Out Front Theatre’s Spectrum Spotlight Series. Working Title managing artistic director Amber Bradshaw directs. No dramaturg has been named.

Twenty-Two by Erin Considine. November (date to be announced). We lose 22 soldiers a day to suicide. Twenty-Two zeroes in on one woman and one man, both struggling with the aftermath of their choices and finding hope in each other. Considine, who has acted for more than 20 years, has turned her attention to playwriting. She was a finalist for the prestigious 2019 Eugene O’Neill National Playwriting Conference in Waterford, Connecticut. Justin Anderson, Aurora Theatre’s associate artistic director, directs. No dramaturg has been named.