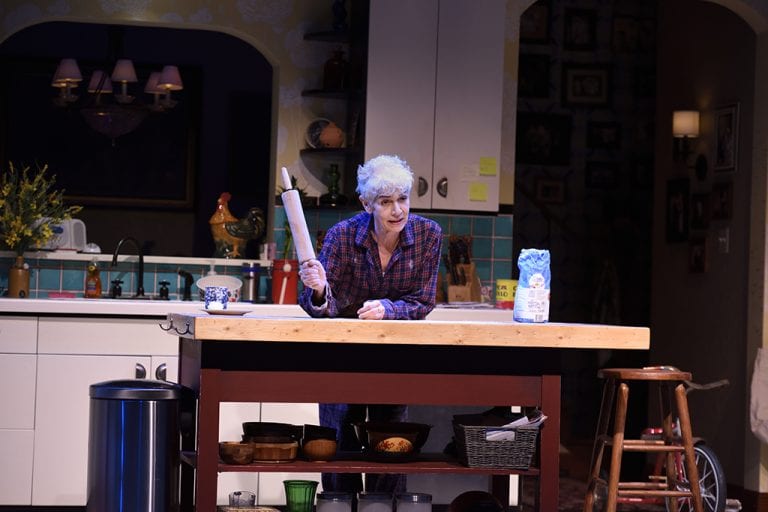 In her new play, “Knead,” Mary Lynn Owen finds a sense of place through baking bread

While she was growing up, moving around was a way of life for actress Mary Lynn Owen and her family. The cities changed often, but one constant was her mother’s love of bread. Known as one of Atlanta’s most talented, versatile actresses — most recently a Suzi Bass Award winner for Aurora Theatre’s Wit — Owen wrote and stars in the world premiere of Knead at the Alliance Theatre. It’s a personal piece that began as part of the theater’s Reiser Atlanta Artists Lab a few seasons ago and sprang from the memories Owen had of her family and the importance food plays in passing multicultural traditions to the next generation. We caught up with Owen recently to talk about the play’s origins, her mother’s love of cooking and the Reiser Lab experience with the show, running November 13–December 9 on the Alliance Hertz Stage.

ArtsATL: How did you come up with the concept for this?

Owen: I had this collection of pieces that I was writing. Every now and then I would emerge and take a writing class, or show someone something, and along the way, David de Vries, a close friend of mine who has been a witness to all these events, said I really needed to put these into a theater piece. I didn’t really take him seriously until one day he said he thought it could all hinge on baking bread. That was so central to my mom. She did that three or four times a week. Once we found that central metaphor, it seemed to be so rich for everything. What I came up with is a [story about a woman] who is trying to bake bread from her mother’s recipe at 3 a.m. The story is how this woman is going to get through the night and through the last passage of her life.

ArtsATL: Can you tell us about your mother?

Owen: She passed in 1995. She was Cuban American, the daughter of Cuban immigrants. Her family eventually moved to Miami, and she was raised there. She married my father and — like [actor] Rob [Cleveland] and me — they had a mixed marriage. He was southern, on his way to the seminary, from Americus, Georgia. It was the ’50s and ’60s, and my mother threw her life into my father’s and tried to be a good Cuban girl as she was trying to be a good American preacher’s wife. It was a bit of a struggle. She was a Methodist preacher’s wife, and we were always moving, every three years. It was like being in the military. She was not a Betty Crocker housewife. She wanted to be but could never pull it off. She came from a different family, background and upbringing and was now in the South, walking a fine line. I witnessed that — a vibrant, beautiful woman trying to contain herself — and it was hard for her. Watching that gave me a lot of feel for her. I wanted to know, how do I live and take off in my own life?

ArtsATL: Why was cooking so important to your mother?

Owen: For our whole family, we moved around so much, yet the bread and my mother’s cooking unified everything. I realized when I was eulogizing her that we had so many homes, but every house smelled the same because of the bread. It brought us all to the table. Also, in many ways my mother was unhappy, and baking bread for her was therapy.

ArtsATL: Can you talk about the experience of going through the Reiser Lab?

Owen: It’s wonderful. I applied as the lead artist, brought David on as a director and also brought a musician. David and I both had deaths in our family, and it was a surreal time. I remember one night I came home and I thought I had one more day [to apply], and I realized I had three hours left. I scrambled but sent it in. We got accepted in the first part of 2016 but didn’t do our showcase until May of 2017.

When we were accepted, we were given $10,000 and a due date. They are both critically important. The due date is when they were going to check in on you for your presentation. I worked every day. David and I were always hammering stuff out. When I took time off from teaching, I put the script on a wall in a shed outside and marked what I needed to do with the bread. Once we knew I was going to be baking bread, the play had to follow the structure of bread-making, which was really helpful. I always knew there would be a punch. In baking bread, there is a violent action of punching, and I always knew where that was going to be. That began to locate the play for me. It was a lot of baking and scotch taping and cutting.

I understood that plays were about activity, but to structure a play is fascinating — how does it build; what to leave in; what to leave out? Alliance artistic director Susan Booth pushed me on that. Certain stories and content have remained the same, but even those have shaped some. After the showcase, Susan said she wanted to produce this, and I thought I was hallucinating!

ArtsATL: What’s it like being married to a fellow performer?

Owen: It’s always been a benefit. Sometimes, Rob and I look at each other and think couldn’t you have had a business career? Financially we can skate on thin ice sometimes, but there is an understanding. As we speak, he is covering the acting classes I teach for me so I can be full-time in this process even as he is working at Horizon Theatre. We get what the other is doing.