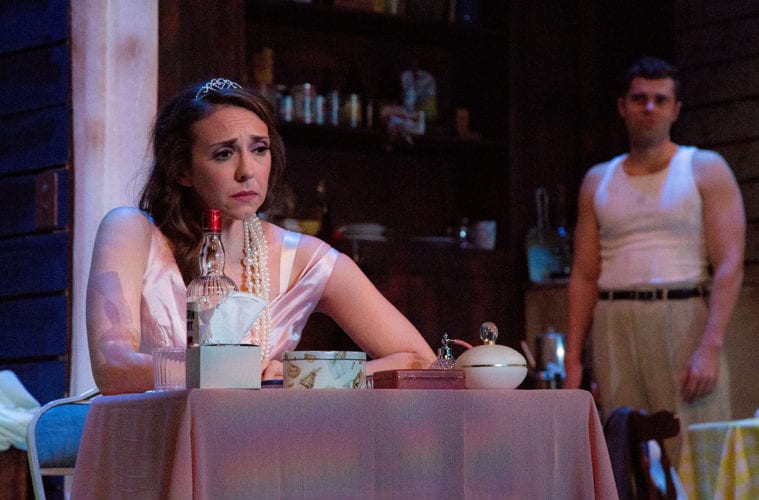 7 Stages, Warped The ensemble behind Paper Doll Militia attempts to defy time and space in this new production that asks questions about mortality and the human experience. The show will feature their signature circus moves and aerial acrobatics along with original music and projections. Warped is presented by 7 Stages Theatre in partnership with Dance Mission Theatre, Host of Sparrows Aerial Circus, Dogtown Dance, OnFife Cultural Trust and the National Performance Network. Through February 24.

Theatre Buford, A Streetcar Named Desire The world is changing, and Blanche DuBois is grasping at every remnant of the Old South that she can save. The bank has repossessed the family plantation Belle Reve, leaving her in squalor. Desperate, she travels to New Orleans to visit her sister Stella and Stella’s jealous husband, Stanley. When she can’t find comfort there, she escapes into her mind, which is the last place she needs to be. A strong ensemble cast, starring Courtney Patterson as Blanche, delivers a formidable production of this Tennessee Williams classic. Through March 3.

Theatre du Reve, Code Noir Performed in French with English supertitles, this is the first Theatre du Reve production featuring a story from the French-speaking African diaspora. Code Black: Les Aventures du Premier Comte de Monte Cristo (Black Code: The Adventures of the First Count of Monte Cristo) tells the story of General Alex Dumas, one of France’s most celebrated generals. Thandiwe DeShazor, who Atlanta audiences will recognize from the Actor’s Express productions of Angels in America and The Legend of Georgia McBride, stars in the title role. Through March 10.

Act3 Playhouse, Peter and the Starcatcher This Tony Award-winning musical revisits the beloved story of Peter Pan. This time, a young orphan and his mates are shipped off from Victorian England to a distant island ruled by the evil King Zarboff. At sea, they are discovered by a precocious young girl named Molly, a Starcatcher­-in­-training who realizes that the ship is carrying a powerful celestial substance. When the ship is taken over by pirates — led by the fearsome Black Stache, a villain determined to claim the trunk and its treasure for his own — the journey quickly becomes a thrilling adventure. Through February 24.

Synchronicity Theatre, Bob Marley’s Three Little Birds Ziggy is a shy Jamaican kid who stays inside to avoid facing his fears, but that all changes when he meets some bold, boisterous tropical birds. Based on the children’s book by Cedella Marley, reggae singer Bob Marley’s eldest daughter, Three Little Birds is a musical for all ages. Featuring some of Bob Marley’s most beloved songs, the show’s message of peace and living life to the fullest is sure to resonate with everyone. Through February 24.