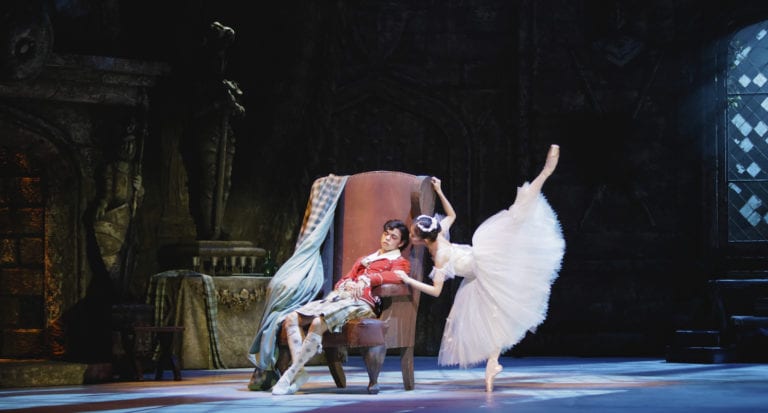 Atlanta Ballet is like that one considerate friend who is always there in mid-February with a Valentine’s Day treat. This year’s bon bon is one of the world’s oldest romantic ballets, La Sylphide, presented with live music from the Atlanta Ballet Orchestra. Originally created by legendary choreographer August Bournonville in 1836 for the Royal Danish Ballet, it was restaged for Atlanta Ballet by internationally accomplished choreographer Johan Kobborg. The tale of love found and love lost runs through February 23 at the Cobb Energy Performing Arts Centre.

When presented with all its bells and whistles — live music, striking scenery and virtuosic dancing — La Sylphide has power to delight the senses. As such, when conductor Tara Simoncic took the podium on opening night and summoned Herman Løvenskiold’s score from the orchestra, an attentive bond between the musicians, Simoncic and the dancers was formed. This would be the love affair that did not end.

As the curtain rose, gasps and sighs filled the theater in response to the mammoth and luxuriously detailed interior of a weathered Scottish castle. Dusty leather chairs, a grand mahogany staircase and chandeliers of dramatic proportions were dimly illuminated through a triumphant arched window upstage. The opening scene inspired as much awe as would the sweeping, gentle power of the delicate sylphs that danced for the protagonist, James Ruben, in Act II. There, equally impressive and satisfyingly detailed scenery placed us in the lush outdoors, where dense flora lovingly embraced some of the evening’s most successful moments.

Except for those who perform its principal roles, La Sylphide is less a dancers’ dance and more of an ensemble theater piece that relies on an audience’s familiarity with the libretto. The literal fairy tale is 80 percent mime and rapidly etches narrative surrounding status quo, reaching for something beyond the mundane, resisting temptation, the value of loyalty, accountability to community and, at the very least, recognizing that you can’t marry a sylph. The miming is rich and detailed, though it often assumes an understanding of what a tilted head, darting glances and magician-like flourishes mean. However, when James’ jilted bride-to-be, Effie (Nadia Mara) gently traced tears down her own cheeks, the moment read loud and clear.

With joy or sorrow, depending on the circumstance, an ebullient corps de ballet ebbed into and out of the space, their intricate footwork evoking Scottish Highland dancing. Often, they framed Emily Carrico, the lead sylph, highlighting her gentle precision and open heart. In her first solo, Carrico lit upon radiant arabesques and took to the air while beating her legs with a wispy exactness that Bournonville himself would commend. For Atlanta Ballet, these little triumphs were a meaningful breath of fresh air. Gone were furtive, fear-induced glances that seemed almost choreographed in recent performances. The sylphs in particular were at home and comfortable onstage. They whispered their presence yet took control of the vocabulary with a power that, for this viewer, was absent from the company last season.

Historically speaking, dancing the role of James is a feather in a ballet dancer’s cap. One must act with convincing nuance, radiate confidence, be a supremely buoyant jumper, convey urgency and realistically maneuver ever-shifting internal landscapes. In this case, Moisés Martín not only physically towered over the cast but also offered a commanding and noble portrayal of the conflicted character. Yet, as physical demands increased during Act II, it seemed Martín caved to tension and doubt. His fixed eyes and rigid shoulders could not hide his insecurity, which affected his relationship with Carrico, his romantic counterpart. Eventually, dispassionate movements that sought more approval from the audience than each other buried their ill-fated romance. The prescribed body shapes were clear, but romantic chemistry was an all-too-important missing ingredient.

Of the evening’s most engaging standouts was Ashley Wegmann as Madge, the feral and plot-twisting sorceress. Wegmann rose to the challenge by elevating the character to a complex yet comedic, sinister yet personable antagonist. Wegmann’s wild physicality turned what could have been “camp” into a meaningful and mature performance. Also notable was Anderson Souza’s turn at Gurn, James’ ally-turned-opportunist who eventually coaxes Effie’s hand in marriage. Souza infused the role with a charming and somewhat anachronistic “frat boy” bravado, consistently coupling his interpretation with slapstick and powerful dancing.

La Sylphide found its raison d’etre through the simple and honest beauty of the divertissements in Act II. Here, the sylphs congregated, formed simple parallel lines, wistfully glided through space, poetically moved their gossamer arms then swiftly took to the air to delicately land entrechats — without making a sound. The moment was visually stunning and impeccably musical — in short, a pristine summary of the romantic era.

Ultimately, La Sylphide concludes with swift and devastating blows to James. His sylph is in decline, then wingless, then ascending through the trees. His former friend Gurn boastfully parades across the stage with Effie on his arm. Madge reappears just as James succumbs to sorrow, and then under her spell, he collapses center stage. The cumulative result is Disney before there was Disney, gesticulated dialogue before there was silent film. Though not a deeply moving work, La Sylphide is an enchanting jump into the past that impresses with its charm.