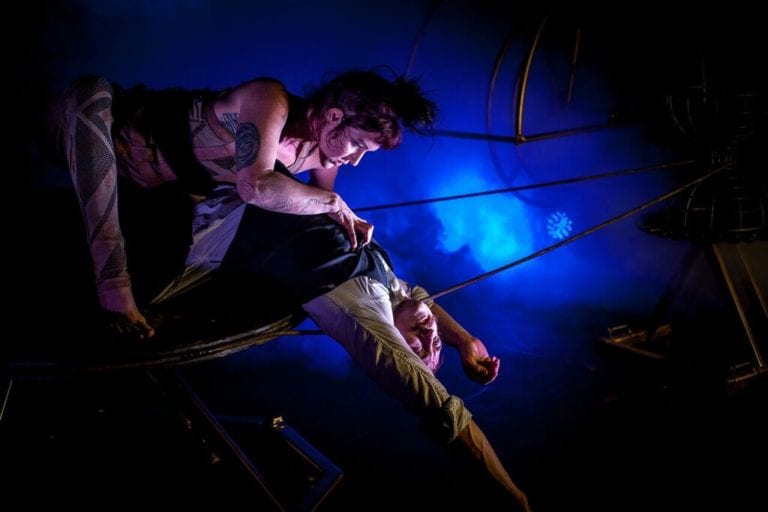 Out of the box, experimental and fiercely weird is the theme of 7 Stages’ 40th season. Paper Doll Militia’s Warped promises to fulfill that vision during its world premiere run February 21–24. The production has its “roots in circus, original music, puppetry and dreamy, whimsical, dark storytelling,” and part of Paper Doll’s mission is “to create a total visual and emotional experience.”

Cofounder Rain Anya is an aerial performer with a background in theater. She began acting around age eight and was surrounded by the craft throughout high school and college. At that time, aerial performance was not mainstream, nor was aerial theater. Upon discovering the craft of aerial acrobatics, Rain was inspired to find a way to incorporate it into the theater that she was already practicing. Thus, Paper Doll Militia was founded.

For their first performance, the creators of Paper Doll Militia were inspired by a storybook by Tim Burton and created a show based on his signature characters and illustrations. Whimsical and bizarre in nature, Anya aims to test the edges of the genre of theater and wants to take risks in combing circus style acts with a traditional theater setting. Most of Paper Doll Militia’s shows use projection or animation, original music devised from collaborating composers, dance and physical theater. Warped will follow that vision.

The collaborative efforts of the creators and cast, including Los Angeles-based director Ezra LeBank and artistic advisor Kali Quinn, have produced a show that asks questions about time, mortality and the human experience. Warped asks the questions: What is death? Who are we? What is time? What consequences do our actions have upon our lives? At a recent rehearsal, the theater was filled with playful structures resembling the pieces of a working clock, with ropes and wheels suspended from the ceiling. The actors discussed the physical logistics of their suspended moves. Agility, endurance and teamwork are essential skills for this cast, and the way they move through space is sure to mesmerize onlookers.

Heidi S. Howard, artistic director of 7 Stages, says she is “super proud” of utilizing her time in the position to bring Warped to the main stage. Anya and Howard actually share a common connection: Howard’s father, who was a science teacher under whom Anya studied. This serendipitous connection has inspired the two of them to create a work that will put into practice the extensive research on the philosophies of time and physics that Paper Doll has done over the years.

Howard says she hopes that audiences come into the space with “an open heart and excitement to let the experience wash over you and sweep you away.”

Anya wants audiences to “imagine that we have a place in this time to make some change.” To Anya, circus/aerial performance allows us to tap into the imagination of the world to see that “maybe things are possible, your perspective can be broadened; that’s what live theater is about — allowing the experience to have an impact.”