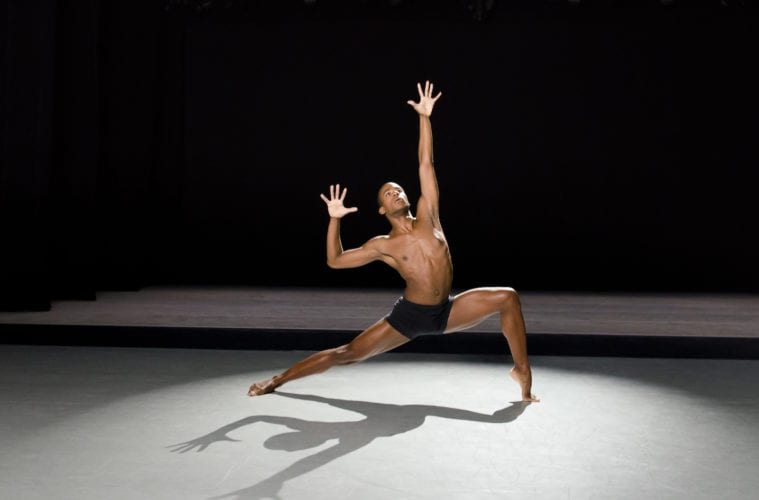 Augusta native Christopher R. Wilson will perform at the Fox Theatre in his debut season with the Alvin Ailey American Dance Theater. (Photo by Kyle Froman)

In the sun-soaked foyer of Atlanta’s National Center for Civil and Human Rights, a tall, lean young man guided about 40 dance students last month as they learned an excerpt from Alvin Ailey’s masterpiece Revelations. Christopher R. Wilson, a native of Augusta, Georgia, and a first-year member of the Alvin Ailey American Dance Theater, moved with ease and elegance between lines of young dancers, calling directions in a voice that matched the choreography’s rhythm and cadence.

It was January 15, what would have been Dr. Martin Luther King’s 90th birthday, and 60 years since Alvin Ailey founded his dance company aiming to enrich the modern dance repertoire and show what’s uniquely beautiful about African American culture.

This Thursday, as part of its 60th anniversary North American tour, the Ailey company will open its annual run at the Fox Theatre with Rennie Harris’ Lazarus, the company’s first two-act work. Inspired by Ailey’s life and legacy, Lazarus addresses racial inequities that the United States faced when Ailey founded the company, and that the nation continues to face.

As Wilson moved across the Center‘s foyer in front of the mural, a collage of civil and human rights graphics, his red-and-black clothing picked up the image’s bold letters and symbols, in like colors, emanating from the palm of an open hand. Messages like “Solidarność,” “Stop Apartheid Now” and “Justice” seemed to pop out of the mural. It seemed as if Wilson, as dancer and teacher of Ailey’s legacy, was a living extension of the mural’s composite message.

“You’ve all seen Revelations,” the 23-year-old artist said to students. “Alvin Ailey choreographed it in 1960 from blood memories of growing up in Rogers, Texas. He lived through the Great Depression and the Civil Rights Movement. Revelations was about his experiences from the black church.”

Wilson introduced part of “Pilgrim of Sorrow,” the work’s first section, inspired by the troubles of black people and their efforts to rise up from the ground. “Those moments when you feel so down into the earth, you’re at your lowest,” he said. “Think about being down, being grounded.”

The dancers rose up from a deep, wide stance as the spiritual “Didn’t My Lord Deliver Daniel” played. They clasped their hands together, arms thrust upward, then dropped that gesture toward the floor. On a forceful pulse, they contracted their spines, turning the body one way, then another — as if breaking the chains that have bound them, Wilson later said.

“It’s not about the arms,” Wilson said to the class. “The contraction comes from the back and the torso. That’s what gives it that gritty essence.”

After class, Wilson sat down with ARTS ATL to talk about his Georgia roots and how family history continues to inform him as he works to further Ailey’s legacy.

ARTS ATL: At age 11, you first saw the Ailey company perform at the Fox Theatre. What do you remember about that day?

Christopher R. Wilson: Walking into the Fox Theatre, it felt like the entire world to me. That space is just magnificent. I’m looking forward to seeing it from the stage — it’s going to be unreal.

ARTS ATL: Which piece made the strongest impression that day? 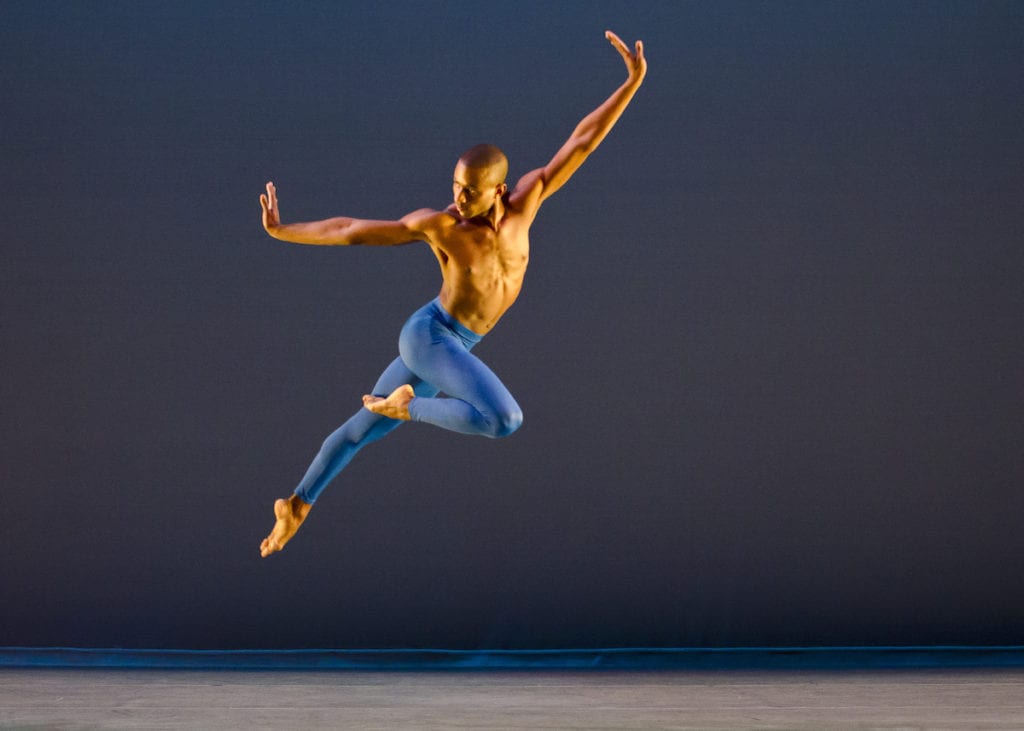 Wilson: The Golden Section by Twyla Tharp. As an 11-year-old, my mind was overwhelmed, but I can still see it — these superheroes in all gold, flying and jumping across the stage. I still think of all the Alvin Ailey dancers as superheroes.

ARTS ATL: What did Revelations mean to you then, compared with what it means to you now?

Wilson: I don’t think I quite understood the magnitude of Revelations, but I do remember the roar from the audience when the curtain went up. I understood that it was good dancing, and I could see there was a story behind it.

Now, having spoken with people who lived those experiences that we tell through Revelations, I really understand what we’re going into. Being young, sometimes it’s difficult for me to bring myself into Revelations because I don’t have those experiences to pull from. That’s when I have to go deep within and think about what I’ve learned from my grandmother, my great-aunt and my great-uncle — from stories former Ailey dancers have told me. I have to really hone in and pull from them as much as I can. It’s not always easy, but those moments that I do, the feeling is unreal. I feel as if I kind of float through the performance. It’s an out-of-body experience.

ARTS ATL: Can you give an example of one of those experiences?

Wilson: While I was in Ailey II, I performed the solo “I Wanna Be Ready” in Revelations, here in Atlanta. I decided to think about my great-uncle. He passed when I was 11 years old. He was like a grandfather to me, and I took his passing very hard. He was sick for a long time, and at one point, he said, “Whenever the Lord calls me, I’m ready.” In the performance that day, I decided to just think about him the entire time. I don’t even remember the performance, because I was with him, like having a conversation with him the entire time.

ARTS ATL: When did you know that you were going to be a dancer? 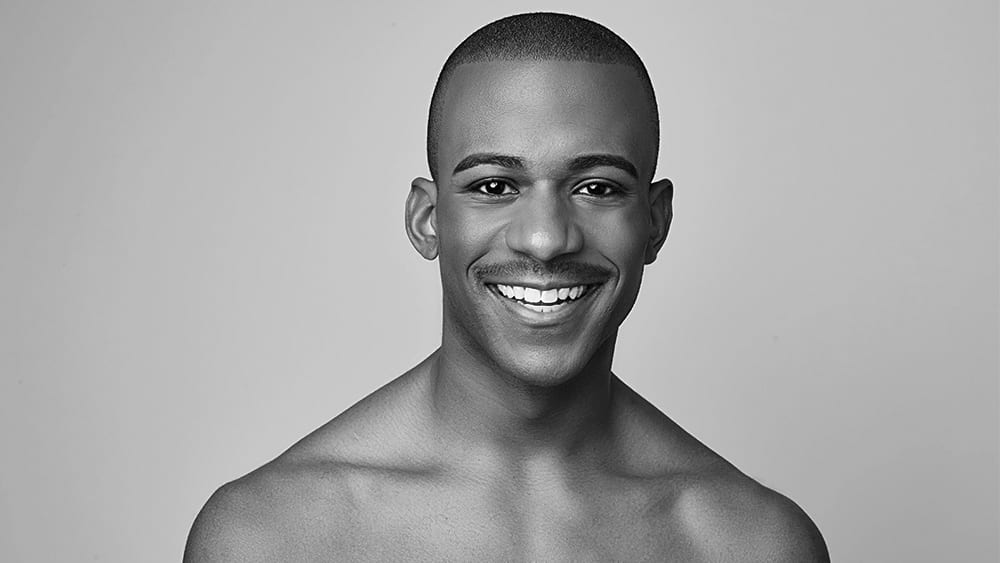 Wilson: It was the summer before my junior year of high school. I attended the Governor’s Honors Program in Valdosta, and during our final performance, I was doing a solo onstage to music by Owl City. I remember the lyrics, “I can finally see that you’re right there beside me. I am not my own, for I have been made new.” And something hit me that said, “You’re supposed to be doing this. This is where you’re supposed to be.” In that moment, everything kind of stopped, froze and just shifted. I decided dance is what I want to pursue, and I haven’t looked back since.

ARTS ATL: You’d been dancing from age nine and had attended an arts magnet program during middle and high school. As a boy studying ballet, did you experience bullying?

Wilson: Oh, yeah, in elementary and middle school — the typical teasing for a young boy dancing. But I just kept going because I said, “I love to do this, so you can think what you want, but at the end of the day, I know I’m going to go somewhere with this. So, I’ll see you on the other side.”

Wilson: I suffered a knee injury my junior year of college, a couple of months before the Ailey II audition, and I was on crutches for two weeks. Ailey was what I really wanted, and I thought the injury would throw me off and had shattered everything. I had been on this upward trajectory for so long, and I didn’t know if I could bounce back. It had me down for a while.

Thoughts started to pour in about whether or not I should be doing this. And my mom helped to pull me up. She said, “I know what you’re feeling right now, and it’s okay to feel those things, but you’ve got to feel them and then move on.”

Physical therapy has come a long way in our time, and I just kept with it and kept going. And talking with mentors and friends — their encouragement also kept me going. I watched a performance at The Ailey School. Seeing my peers perform live and have so much fun onstage could have deterred me even more. But I actually felt inspired to get back so I could dance again. 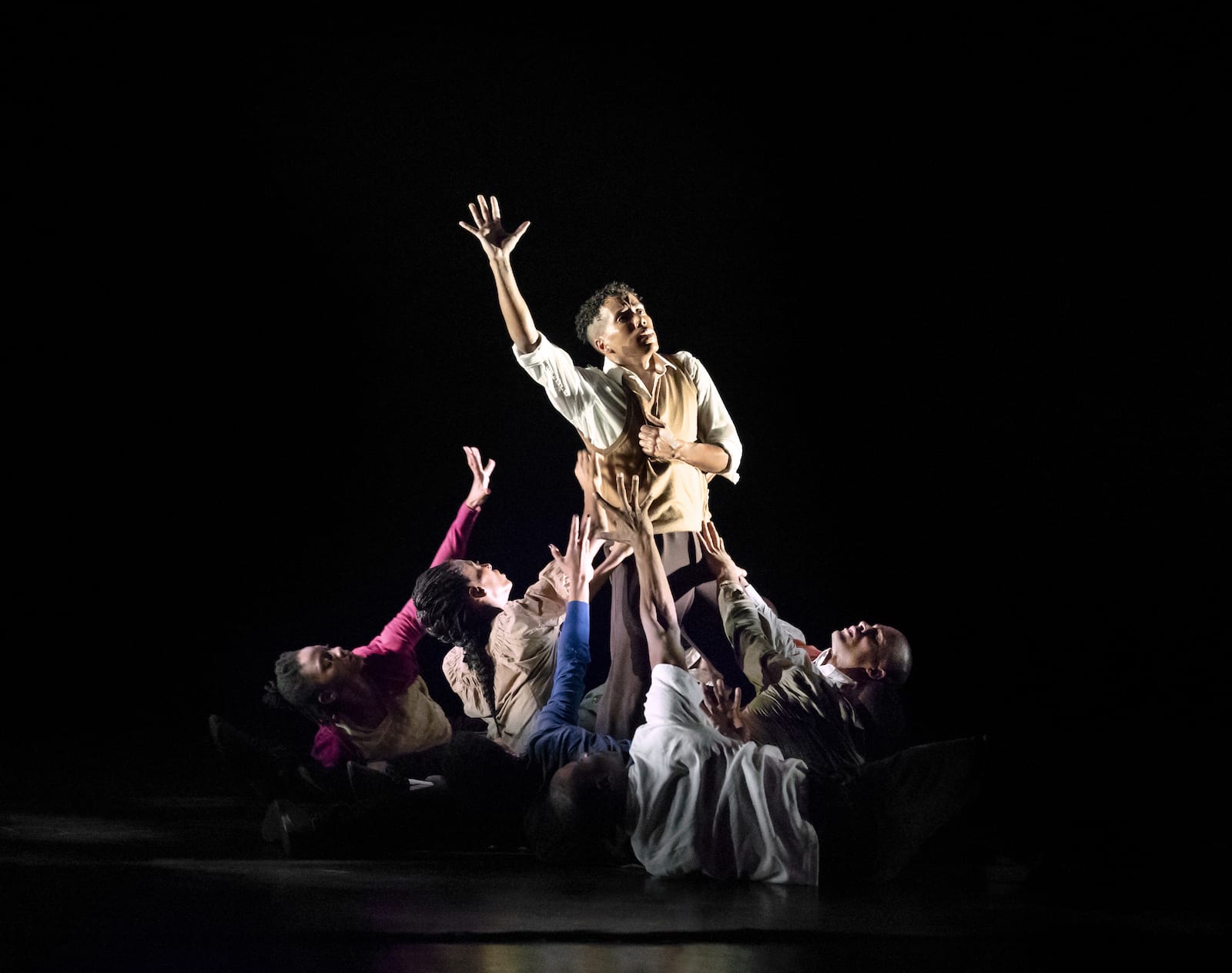 Wilson: It’s probably the piece I’m most excited to perform. Rennie takes you on a journey through this piece. The imagery he uses, the music, what he has us doing, the costumes we’re wearing — every detail really takes you there. It makes you think, and it really pulls you in.

ARTS ATL: Can you say more about that?

Wilson: It’s one man’s journey, Mr. Ailey’s, and the piece is chronicling Mr. Ailey’s time. At the beginning, we’re wearing pre- and post-Civil War attire. Slavery. Then he alludes to the Great Migration, escaping from slavery, the Civil Rights Movement, protesting and all of that. There’s a part that really gets me: He has the sound of water hoses and barking dogs playing over the music track during the protest. People are shielding themselves. It’s gut-wrenching. I didn’t experience those things, but there will be people in the audience who did, and I can only imagine how it will make them feel.

The first act ends with the image of this man being pulled to the ground. And you’re left thinking, how’s he going to come back from this? The way Rennie pulls you from that dark place is incredible.

ARTS ATL: How does he pull you out of that sunken place?

Wilson: What I get from it is, no matter how dark or difficult or trying the journey may be, there’s always light and hope at the end. I’m thrilled for this audience to be able to experience Lazarus, because as cliché as it sounds, I think they will walk out of the theater changed.