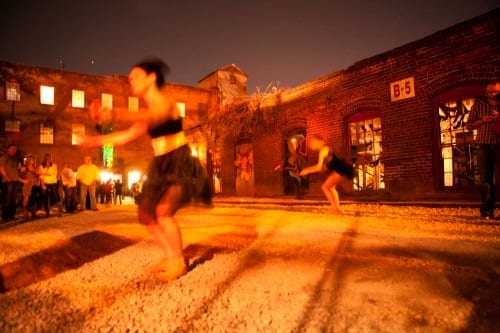 The year in review: In an economic drought, Atlanta’s art “tree” flourishes and blooms

About this time last year, I tempted fate.

Given Atlanta’s history of promising starts and deflating sputters in the visual arts, it was, if one is at all superstitious, a bit Icarus-like of me to declare in my 2010 year-end piece that our city had a new momentum. So here we are, 12 months later, and it seems that the gods did not punish my hubris. Although this was a tough year economically, we are still moving forward.

But perhaps the art community as rolling stone is not the best of metaphors: we need the moss. Let’s go with a tree, whose roots and thickening trunk support the growth of branches and blooms. The High Museum of Art, for example, has begun to make good on its stated desire to become closer to the community, through an exhibition exchange with the Museum of Contemporary Art of Georgia and solo shows of Atlanta artists Radcliffe Bailey and Chip Simone.

MOCAGA continues to build a historical legacy with exhibitions of Working Artist Project winners — Xie Caomin, Micah Stansell and Katherine Mitchell, whose exhibition is on view through March 31 — as well as Scott Belville, Gretchen Hupfel and Maurice Clifford. Adding to the story were “Moulthrop: A Southern Legacy” at the Marietta/Cobb Museum of Art and Spruill Gallery’s “Out of Print,” which featured a sampling of artists’ books published by Nexus Press.

Living Walls added to the city’s inventory of murals, as did “Four Coats,” a city-sponsored project involving Beep Beep, Get This!, Marcia Wood and Whitespace galleries. In the place-making realm, let’s give a nod to Atlanta BeltLine Inc., which opened three new parks, and to the Piedmont Park Conservancy for its expansion of that park.

The Goat Farm is an exemplar of place-making. Anthony Harper and Chris Melhouse have created a vibrant art colony and event venue in the 19th-century remains of a cotton gin factory. Home to dance companies, theater groups, visual artists, musicians and others, it also plays host to cutting-edge performances and arts events, such as the courtyard performance below.

Despite its title, “Noplaceness: Art in a Post-Urban Landscape,” a thematic critical study of the Atlanta contemporary art scene, is about establishing placehood, too. (Disclosure: I’m a co-author.) The book inaugurated the series “Atlanta Art Now,” which aims, as publisher Louis Corrigan might say, to reveal the art scene to itself, and to lodge Atlanta more firmly in art-world consciousness through concerted national and international distribution to decision-makers such as curators and writers.

Is it just my imagination, or did the local exhibitions and events increase exponentially this year? With the caveat that I didn’t see nearly enough of what was on offer, I’ll close with a few memories, in no particular order.

At the Atlanta Contemporary Art Center: Dana Schutz’s drawings, followed by one of her influences, Peter Saul, whose paintings were half of an unlikely but quite provocative pairing with Mel Edwards’ sculptures; the opening tableau of Shana Robins’ performance; sculptures by David Shaw and Elonda Billera, from the sublime to the ridiculous; curator Matthew Hicks.

Micah Stansell: "The Water and the Blood"

Beyond the white box: Gyun Hur’s “Spring Hiatus” at Lenox Square; the gloATL dancers crabbing down Peters Street and Jeff Demetriou’s 3-D disaster at FLUX 2011; the Knitterati’s “Communitrees” in “Art on the BeltLine.”

That’s a start. Please add your own favorites.

The picture on our home page is a detail of “Paradise,” an installation by Karen Tauches, featured on the back cover of “Noplaceness.”