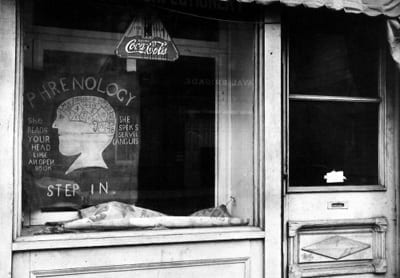 Note: When I wrote this story, I did not know that photography curator Julian Cox would be leaving the High Museum of Art. As we announced last week, Cox will become the founding curator of photography for the Fine Arts Museums of San Francisco and chief curator of the de Young Museum. The quality and strategic thinking behind the Peter Sekaer project — the acquisitions, show and catalog — explain the disappointment expressed in the comments following our post about Cox’s departure. I talked with Cox about his move and his hopes for the High Museum and will share his comments in a post later this week. This story ran in the AJC print edition on Sunday, although not apparently on its website. — Catherine Fox

The masters of documentary photography of the 1930s and ’40s line the walls of Atlanta’s Lumière gallery. Berenice Abbott. Walker Evans. Dorothea Lange. You won’t, however, find any of their names on the label of that piercing portrait of a sun-wizened Georgia farmer dressed in his city clothes (below), or on the view of a sign-laden New York storefront. Those photographs represent the vision of Peter Sekaer. The Danish-born photographer may be a cipher now, but that is bound to change, thanks to the High Museum of Art’s groundbreaking exhibition “Signs of Life: Photographs by Peter Sekaer,” the first in-depth survey of Sekaer’s work, and the eponymous publication that accompanies it.

The exhibition, curated by High photography curator Julian Cox, also chronicles Sekaer’s life and times. An aspiring New York painter turned on to photography by a class with Abbott and encouraged by his friend Evans, Sekaer (pronounced see-kare) was clearly a quick study.

The Rural Electrification Administration hired Sekaer only two years after his class with Abbott, and he continued to work for various government agencies until 1943. During that time he crisscrossed the country, sometimes with Evans, on such assignments as the documentation of slums for the United States Housing Authority.

Along the way, the work became a vocation as well as a livelihood. Sekaer felt deep empathy for the people he encountered and wanted to use his photographs to help ameliorate their hardscrabble lives.

Reasoning that pity only repulses viewers, he believed that humanity was the route to empathy. “He showed that [his subjects] were people you would like, like anyone else in difficult circumstances, trying to make the best of it,” says his daughter, Christina Sekaer.

For example, the image of a toddler on his mother’s knee in “Macon, Georgia, 1936,” posed in the convention of Madonna and child, radiates dignity despite the family’s obvious poverty.

Cox admires Sekaer’s sympathetic but unflinching portrayal of Depression-era life and culture. “I see him as a forerunner to Robert Frank,” who focused on society’s margins in his landmark 1958 book, “The Americans.” “Both were outsiders with a highly tuned social consciousness,” Cox says. (Frank is Swiss.)

Cox also admires Sekaer’s versatility and artistry. The exhibition demonstrates his prowess in photographing big-city architecture as well as rural life. It alternates between the premeditated compositions of “Macon” and the engaging spontaneity of the high-spirited children playing in an alley behind a Charleston tenement. The show also reveals the photographer’s puckish sense of humor and, like Evans, his love of signs, both as abstract form and as cultural markers. In short, in showcasing his skills, Cox is making a case for Sekaer’s place in the canon of Depression-era photography. And he’s confident enough to have acquired 53 vintage photographs and received 17 more as gifts or promised gifts from Sekaer’s estate to make the High’s holdings the largest museum collection of Sekaer in the country.

The curator had only a passing familiarity with the artist before New York dealer Howard Greenberg, who handles Sekaer’s estate, encouraged him to take a look at the photos a few years ago. “The light bulb went off,” Cox recalls.

Besides being impressed with the quality, he saw that Sekaer’s interest in the South and his engagement with the African-Americans he photographed had yielded some of his best work. “I though it would be a good fit, considering our missions to build a collection relevant to the region and to reach diverse communities,” Cox explains. “Since prices hadn’t risen like Evans, I thought we could have a huge impact on our collection and a big bang for the buck.” The curator turned to his stalwart benefactors for help. Retired businessman Robert Yellowlees, who has a long-term commitment to building the High’s photography collection, agreed to fund the lion’s share of the acquisitions and support the publication.

“It is excellent work, the subject matter is appropriate, and the book is an important contribution to scholarship,” says Yellowlees, who owns Lumière. “I think it adds unique value to the collection.”

Yellowlees says he couldn’t resist the temptation to tout Sekaer by showing his work with his more famous peers. Photography scholar John Hill, who wrote the essay in the Sekaer museum catalog, visited Lumière recently and reported that Sekaer held his own in that illustrious company.

As Hill notes in his essay, Sekaer had begun gaining notice before his death at age 49. The Museum of Modern Art had purchased and exhibited three of his pictures, and photography guru Edward Steichen included him in every publication of “U.S. Camera” that he edited.

Cox attributes Sekaer’s current relative invisibility to his early death and the absence of a photography market at the time. Without an agent to push for his legacy, the photos languished in the obscurity of his family’s basement until 1980, when his daughter Christina, a psychiatrist, took an interest in them. Though the efforts of her and her mother, aided by Hill and the Howard Greenberg Gallery, the work began to get out. Still, there was no traction until Cox became interested.

His efforts are already beginning to bear fruit. He is in discussions with the International Center for Photography in New York about hosting the show in 2011.

All this is very gratifying to Christina, who has been hoping for this day for a long time. “The show is very well curated,” she says. “Julian really got who he was and what he did.”

But it was the audience that touched her most of all. “I was struck by how many African-American visitors were looking at the photos,” she says. “My father was in the South in 1935. Seeing some potential descendants of the people he photographed standing there looking at them was very moving. I now consider the High as the home for his photos.”

“Signs of Life” will continue at the High through January 9. Lumière gallery will host “Peter Sekaer . . . in Context” through August 21.