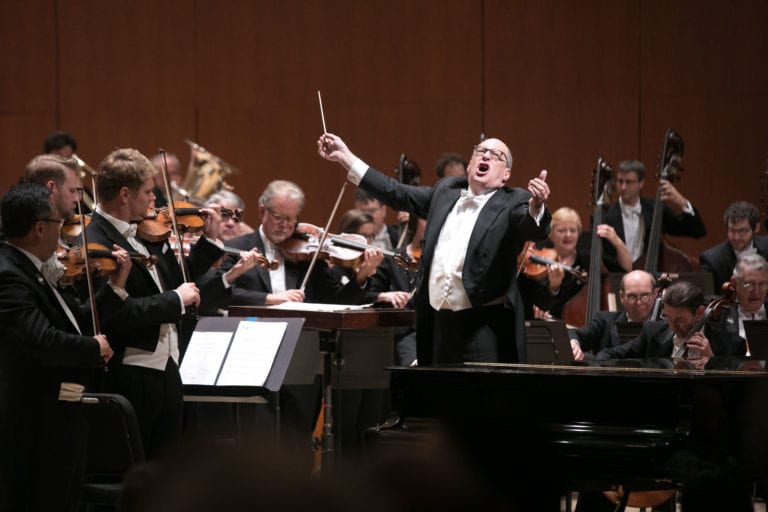 The Atlanta Symphony Orchestra will return to the Symphony Hall stage next month, only without a live audience in performances that will be broadcast online. (Photo by Jeff Roffman)

The Atlanta Symphony Orchestra will present an abbreviated fall season featuring seven concerts from Symphony Hall without live audiences. The performances will be broadcast virtually to subscribers instead.

The concerts will feature smaller orchestral ensembles, music director Robert Spano and principal guest conductor Donald Runnicles, along with guest conductors and artists. The symphony will not perform its traditional holiday shows, Christmas With the ASO and Handel’s Messiah. The ASO Chorus, which marks its 50th year this season, will not perform this fall since group singing is now a high-risk activity because of Covid-19. The original schedule called for a 50th anniversary celebration on October 15.

The orchestra’s last performance was March 11 under the baton of former music director Yoel Levi just before the pandemic forced the state to shelter in place. Georgia, which reopened quickly and has ignored many public health guidelines put in place to combat the pandemic, is paying the price: The state is one of the Top 5 hot spots for Covid-19 nationwide.

ASO officials said a virtual season is the only option for live music this fall.

“At this time, the safest way to perform and engage with our community is through virtual performances,” ASO executive director Jennifer Barlament said in a press release. “These programs are just the first phase of reimagining the fall season; stay tuned for announcements of smaller outdoor performances with live socially distanced audiences.”

Spano said he and the musicians are eager to perform together again. “Our greatest joy is to share our love of music with our audiences, and we have missed them terribly,” Spano said in the press release. “We’ve also missed gathering onstage to make music together. We can’t wait to connect with all of you again this fall, even if it’s done virtually.”

Spano had planned to close out his two-decade tenure with the ASO this season. It appears he will now remain on the podium into 2022 to conduct the large-scale works planned for his final season.

The ASO has installed a high-definition robotic camera system in Symphony Hall, along with enhanced audio. Subscribers will have exclusive access to the fall concerts. Musicians will be socially distanced onstage, with plexiglass barriers and string players in masks. It follows a model that has worked in Europe, where the pandemic has eased enough that live performances have returned on a small scale.

SEPTEMBER 26: Guest violinist Gil Shaham will open the season with Spano conducting a program of Beethoven.

OCTOBER 10: Guest pianist Louis Lortie will join Spano and the orchestra for a Mozart program.

OCTOBER 24: Runnicles will conduct a program of Haydn and Brahms with ASO principal cellist Rainer Eudeikis.

NOVEMBER 7: ASO principal bassoonist Andrew Brady will be featured in a program conducted by Spano and featuring the music of Hertel, Bach and Handel.

NOVEMBER 14: Bassist Xavier Foley, an alumnus of the ASO’s Talent Development Program, will be the soloist for a program of Weber and Dvořák. The guest conductor will be named later.

The ASO hopes to be able to return to the stage in front of live audiences at some point in 2021. Plans for the rest of the season will be announced late this year.