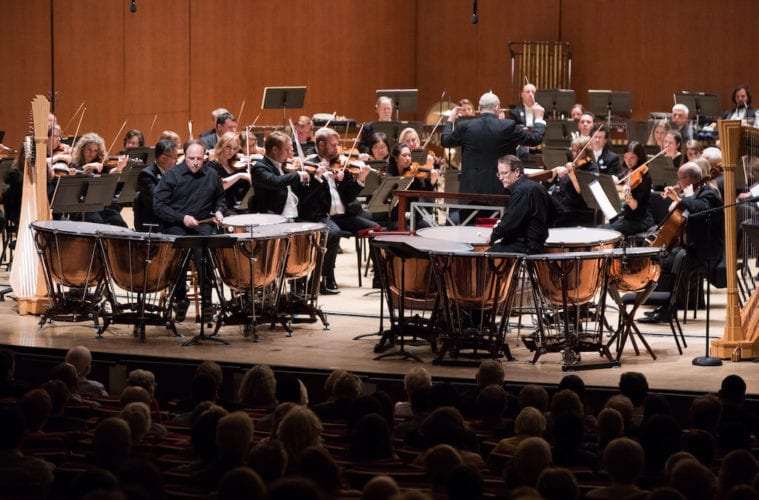 ASO timpanist Mark Yancich (left) stepped into the spotlight on kettledrums with his brother, Paul, at Thursday night's performance. (Photos by Jeff Roffman)

The Atlanta Symphony Orchestra’s concert Thursday night was a study in extreme contrasts, both musical and emotional, with a focus on two local composers championed by music director Robert Spano.

On a more familiar note, the program closed with Beethoven’s Symphony No. 5, famous for its “Fate” motif and ultimate triumph over tragedy. The program — a mix of challenges and comforts to the listener — repeats Saturday.

Despite its somewhat muted reception last night, Prior’s symphonic poem, which the ASO premiered in 2013, is an accessible, lyrical work with a sound world that evokes Rimsky-Korsakov and early Stravinsky. The tone poem’s grandiosity recalls moments in John Williams’s Star Wars soundtracks that highlight the majesty of outer space, such as when the droids C-3PO and R2-D2 hurtle toward Tatooine in Episode Four (1977). Composer Richard Prior (right, in white jacket) came on stage for bows with Spano after the performance.

From beginning to end, the tone poem’s key moves up a half step, giving a brightening effect. Spano elicited a restrained performance while bringing out sensitive, yearning shadings in the strings and winds.

Oliverio’s Double Timpani Concerto, which was composed for the Yancich brothers in 2011 and premiered with the ASO that same year, has set a new standard for virtuosity on that instrument. In the work, a dozen kettledrums are arranged around two players at the front of the stage; unusually, each timpanist has an accompanying harpist — sometimes described as a “guardian angel” — behind them. This concerto challenges listeners to hear timpani as melodic instruments, not just as timekeepers or timbral effects. I would recommend that concertgoers listen to a recording of the work ahead of time to practice hearing the pitches of the timpani.

In the energetic and syncopated first movement, “Impetuous,” the Yancich brothers’ close coordination with the orchestra was evident. To my ears, this work was sometimes limited by its constraints: The orchestra — especially brass — had to play sparingly for the soloists to be heard, sometimes resulting in short, clipped melodic ideas.

The second movement, “Naïveté,” highlighted the harp continuo parts beautifully, with the soloists providing long-breathed lines in a meditative, peaceful atmosphere. The third movement, “Interlude,” was a brief kettledrum duet that had a mixture of rumbling and glissando effects. I had expected more overt virtuosity and musical complexity, but here Oliviero’s writing disappointed with the overall melody riffing on intervals used in classical timpani parts instead of incorporating ideas that a listener could hum afterward.

The fourth movement, “Ancestors Within,” was more effective, veering between pensive and peaceful. The timpanists began to play two notes consistently at the same time, or “double stops.” The trading off of melodic ideas between the soloists and the orchestra was most fascinating here, with the timpanists having the movement’s last word.

The fifth movement, “Destiny,” was the showstopper of the work. Each timpanist got their own virtuosic cadenza, much as jazz drummers will do in solos. Mark Yancich, in particular, caught the audience’s attention with a mix of aggressive gestures and sudden glissandi. Paul Yancich’s cadenza began more lyrically then worked up to a virtuosic close. Overall, the fifth movement reminds the listener that they will need to wait in this work until the end for traditional, concerto-like virtuosity.

In the concert’s second half, the ASO gave a highly physical, vigorous performance of Beethoven’s Symphony No. 5. This work has a performance history almost as interesting as his Ninth: Its first four notes were played at the beginning of the BBC’s broadcasts to Europe during World War II. Thursday night, Spano gave it a full-bodied sound with a heightened focus on the low instruments, as if he were trying to crank up the bass in a car stereo. He consistently mimicked gestures of playing heavy, powerful bowings to the cellos and double basses, turning the ASO into a customized instrument whose sound the audience could feel emanating from the floor.

The first movement, Allegro con brio, was somewhat heavy and relentless, with the opening four-note motifs sucked into an overall continuity instead of highlighted as a declamation. The Andante con moto trended quick, but with the occasional martial idea having an amplified bass. The Scherzo movement, an allegro in which the “Fate” rhythm (da-da-da-dum) returns, was sprightly and surprising, with its trio unashamedly athletic and polyphonic.

After a patient, delicate transition into the last movement, the ASO let loose with its most effective playing of the evening. The finale, Allegro, combined Spano’s focus on boosting the lower instruments with rugged syncopations and a majestic, patient tempo. The result was an exuberant, ecstatic arrival from darkness into light, and with Beethoven’s full energy on display.

Overall, the ASO demonstrated a full spectrum of emotions, as expressed in very different times and places by different composers.