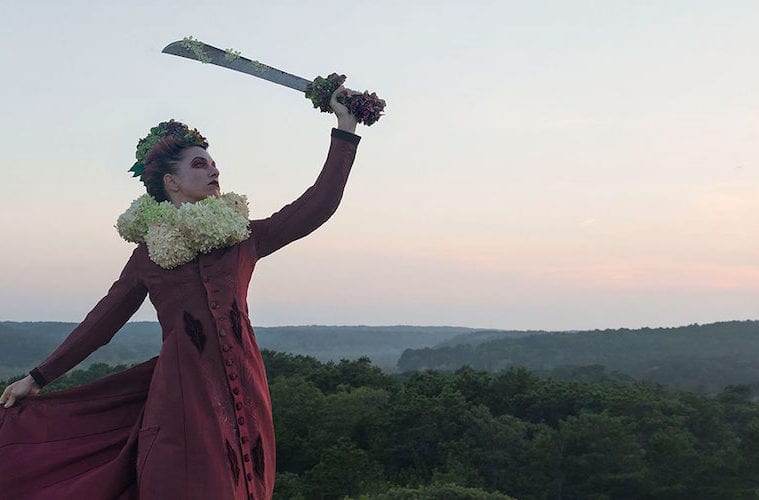 Amanda Palmer performs at Cobb Energy Centre on May 17. (Photo by Nicholas Kahn)

Earlier last week, Georgia Governor Brian Kemp signed the controversial HB 481 “Heartbeat Bill” into law. This measure will criminalize all abortions performed after fetal cardiac activity can be detected, which can happen as early as six weeks of pregnancy.

Several women have already spoken out against the bill, including actress Alyssa Milano. Now, another name can be added to the effort — Amanda Palmer, whose tour lands in Atlanta on May 17 at the Cobb Energy Centre.

According to the most recent report by the CDC, the legal abortion rate in the United States for 2015 was 11.8 abortions per 1,000 women aged 15–44 years. Additionally, the Guttmacher Institute’s 2013 data states that 89% of abortions occur in the first 12 weeks of pregnancy.

“You know the statistics, Jill, even though they may not help. / Isn’t it amazing how we can never tell who is in an identical hell?” sings Palmer in “Voicemail for Jill,” pulled from her latest album, There Will Be No Intermission.

The song is a lyrical message left for a friend who is planning to undergo an abortion the next morning. We never learn the reason Jill has chosen to terminate her pregnancy — even the music video provides only vague clues — but we do learn about the isolation Jill endures from having to bear her burden in silence.

“I didn’t have an idea for ‘Voicemail’ right away,” Palmer says, “but I knew I needed to write a song about abortion. So I asked my fans what they would say to someone who was going through that.” Amanda Palmer shares intense, personal experiences on There Will Be No Intermission. (Album art by Richard Selesnick)

Palmer has been open about her own experiences with abortion, miscarriage and, on a happier note, the birth of her son with author Neil Gaiman. “So many have been through this experience,” she says, “but we’re not given an obvious forum for how to discuss it openly — so this was how I was able to do so: through song.”

“Voicemail” is only one of the intensely personal tracks on There Will Be No Intermission, a sprawling 20-part journey through the last several years of Palmer’s life, which she describes as incredibly painful — but she says she came out of it feeling galvanized and powerful.

Throughout, the album seesaws between alternating instrumental and lyrical pieces. Instrumentals are expansive and reverberate through an openness of space that feels simultaneously free and ominous. Spending time in these pieces, listeners begin to pick up little bits of strangeness — the eerie waltz of a merry-go-round in the distance, the tinkling metallic sounds of wind chimes and vintage record static.

But just as listeners begin to feel at peace, the fantasy is broken by lyrical pieces that cut between the instrumentals in deeply personal vignettes. Palmer has something important to tell audiences, and she makes sure she’s heard: Ten intimate moments of death, miscarriage, abortion, the pressures of motherhood and even climate change anxiety are confidently confessed. It’s a diary of personal trauma that feels all too familiar.

“We cannot take these rights for granted,” Palmer says. “We are going to have to band together and fight, and one of the most powerful weapons we have is our ability to share stories and spread the truth. We can’t pretend that it isn’t happening or that it’s too uncomfortable to discuss and then expect to keep our human rights.”

Palmer says she wants women to rip the shame off of their stories, as she has done with her own experiences in There Will Be No Intermission, and she has crafted her tour as a place of healing for women to come together and regain courage.

The show will cover the entirety of Palmer’s new album as well as older material going all the way back to her time with the Dresden Dolls. The performances will be interspersed with bits of theater and personal anecdotes: Palmer sings and speaks with confidence about her reproductive health choices and hopes to dissolve the negative stigma around abortion in a powerful three-hour opus.

“If you’re an abortion provider or pro-rights activist or something of the like, just hit me up on Twitter with your name and what you do, and I’ll help you come to see my show for free just as you’ve helped out so many others,” Palmer says. “I just want women in Georgia who are feeling threatened right now to come have this moment of connectedness with me and with each other.”

Connection may be a small solace compared to actual autonomy over one’s body under the law, but, as in the lyrics for “Voicemail for Jill,” if no one’s going to “shout at you that your heart also matters” in your daily life, at least you can be sure that Palmer will.