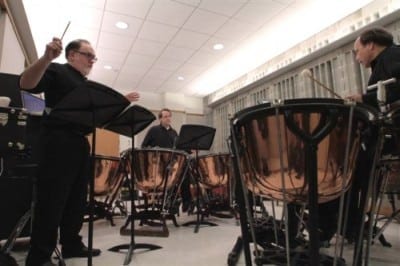 A month before the world premiere of James Oliverio’s “Dynasty” Double Timpani Concerto, Paul and Mark Yancich are in a rehearsal hall at Emory University, facing each other across a sea of copper drums. Elder brother Paul, the principal timpanist of the Cleveland Orchestra, takes the lead. He pinpoints blurry passages and counts off so they drill it one more time. Mark, three years younger, holds the same job with the Atlanta Symphony Orchestra. He nods his approval, then interjects precise remarks that clarify the rhythmic complexities.

The concerto’s opening movement zips along, jaunty and intricate. In the second movement, beyond all expectation, the timpani soloists duet to sing a fragrant and soulful tune that wouldn’t be out of place in a Verdi opera. “We asked Jim to bring out the melodic and harmonic potential of the timpani,” says Paul. “The instrument is slow to react, a lot like a double bass, and our ears tend to pay more attention to the high ranges. Jim has overcome enormous obstacles of perception and in technique.”

“The audience will have no idea what a monstrous endeavor this has been,” adds Mark. “We’re delighted how it’s turned out.”

“And then it’s over in 20 minutes and either people like it or they don’t,” chimes in composer Oliverio, with a wry sense of humor. 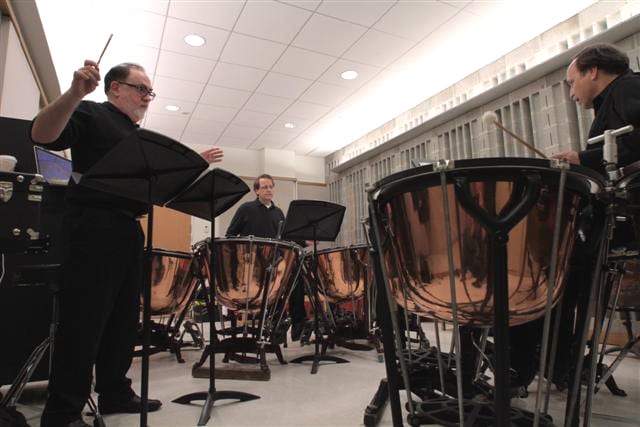 This week, the Atlanta Symphony Orchestra will premiere the “Dynasty” Double Concerto, for two solo timpanists and orchestra. The brothers commissioned it themselves, with financial help from a few patrons. The program also includes Atlanta composer Alvin Singleton’s six-minute “After Fallen Crumbs,” which the ASO premiered in 1988, and Sergei Rachmaninoff’s “Symphonic Dances.” (Photo above: Composer Oliverio rehearses timpanists Paul and Mark Yancich. Photo by Nick Arroyo.)

Beyond the 10 short fanfares commissioned to celebrate Robert Spano’s decade as ASO music director, Oliverio’s “Dynasty” Concerto is the only ASO world premiere of the 2010-11 season. For performances in September, the brothers will be accompanied by the Cleveland Orchestra. 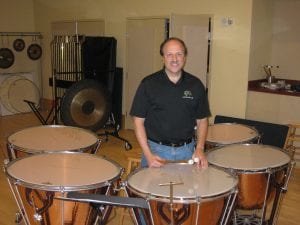 Mark Yancich of the Atlanta Symphony.

Timpani, the copper kettledrums of the orchestra, are often aligned with Mars, not Venus. Their origins go back to military bands and the battlefield. Early depictions have been found on a shield from Babylon, circa 700 B.C.E. By legend, the instrument flourished in the Arab world and arrived in Europe only after the Crusades. From the Baroque operas of Lully through the scherzo of Beethoven’s Ninth Symphony, the timpani drums were meant to evoke martial power and thunder, not seductive melody. But timpani are tuned instruments and cover about half an octave. With five timpani each, of different sizes, the soloists have a range for melodic expression.

“I didn’t write each part specific to the brothers,” Oliverio says, “but they’re two very distinct parts. I didn’t want it to sound like a mélange of 10 timpani drums.”

In a program note, the composer writes: “My overarching esthetic consideration was to evoke and honor the rich legacy of the Brothers and their ancestors, whose love and passion for music continues across multiple generations. The musical metaphor for ‘Dynasty’ was conceived and developed on several levels: the personal, the ancestral, the political and, in the case of the only two timpanist brothers currently holding simultaneous posts with major American orchestras, as a professional analogy as well.” 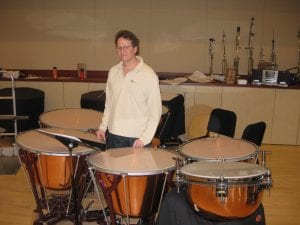 Paul Yancich of the Cleveland Orchestra.

The concerto’s subplot concerns the mysterious Cleveland-Atlanta connection. The Atlanta Symphony has most often been like a farm team to Cleveland’s pennant-winning major-league franchise, but increasingly travel goes in both directions of Interstate 75. It goes back at least to Robert Shaw, who’d been chorus director at the Cleveland Orchestra before taking charge, in 1968, of the Atlanta Symphony as music director. Atlanta’s Yoel Levi, Cecylia Arzewski and countless other musicians and administrators have worked (or apprenticed) at both orchestras. Concertmaster William Preucil held the job in Atlanta and holds it now in Cleveland. Paul Yancich was the ASO’s principal timpanist before being hired away by Cleveland in 1981. He was replaced by Mark Yancich.

In parallel to the New York-Los Angeles talent flow, the CLE-ATL connections go on and on: producers from the Cleveland-based Telarc record label earned the ASO a slew of Grammy Awards, and Robert Spano, who’ll conduct the “Dynasty” Concerto, was born in Ohio, as was General William T. Sherman, who captured Atlanta before liberating Georgia on his March to the Sea. 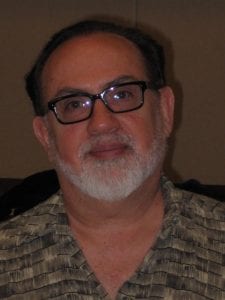 Oliverio himself was born in Cleveland, studied at the Cleveland Institute of Music — where he met the Yancich brothers — and moved to Atlanta as Georgia Tech’s composer in residence. His “Time and Dreams” was a film soundtrack included in the successful U.S. bid to host the 1996 Summer Olympics in Atlanta. Another work, “The Explorer,” was written for the inaugural event of that summer’s Cultural Olympiad. For a time in the late 1990s, Oliverio was described as “Atlanta’s hottest composer.” He’s now on the faculty of the University of Florida.

As undergrads, Oliverio composed a short work for timpani and double bass for Paul’s senior recital. They collaborated again in 1990 for Oliverio’s Timpani Concerto No. 1, which Paul performed with the Cleveland and conductor Christoph von Dohnanyi.

“We think it’s a masterpiece for the instrument,” says Mark, who gave his own performance of the Timpani Concerto with conductor Levi and the ASO in 1994.

“It was just impossibly difficult when it was new,” adds Paul. “Now students are playing it as an audition piece. But too many composers write music so complex that you spend months decoding it,” he observes, “and for what if the audience can’t relate to it?”

To that Oliverio says, “I try to write on a human scale. We’re not trying to revolutionize the orchestra or invent some new musical language with some bullshit attitude that a lot of composers have. It’s a communication thing.”

Oliverio's Double Timpani Concerto, 2nd movement. The composer says he did not tailor the score to the performers, but the parts are labeled "Mark" and "Paul" rather than Timp. 1 and Timp 2.